Does This Photo Show a Reusable Grocery List from 1920s?

We're not convinced this would have been handier than a pencil and paper. 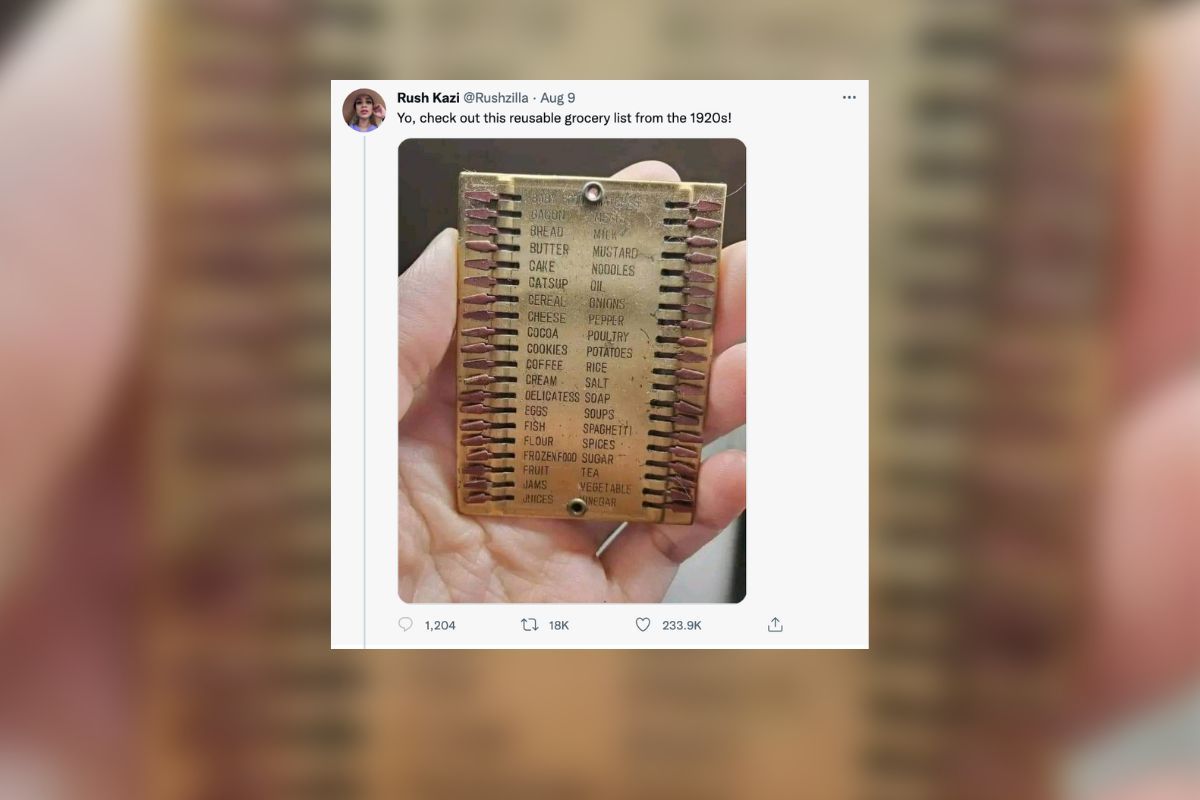 The reusable grocery list was an authentic item invented in the 20th century. However...

A photograph shared widely on social media authentically shows an antique reusable grocery list from the 1950s — not the 1920s, as some online posters have claimed. One such post was so popular that it was shared by over 18,000 people and liked nearly 244,000 times.

We’d like to take credit for this debunk, but that credit is due science writer Joe Hanson, who took to a Twitter thread in August 2022 to show his process in the “fine art of baloney detection.”

As Hanson pointed out, spaghetti and frozen foods weren’t “everyday items” in the U.S. until after World War II. Though frozen peas, for example, were popularized in the 1920s, it wasn’t until the 1940s that frozen foods were largely available to consumers, noted Wiltshire Farm Foods. That’s because, in part, refrigerators weren’t widely available until Freon, the cooling agent in freezers, was more widely used in the 1940s. Of course, there’s the possibility that the list was made in another English-speaking country with a different history of foods, so we plugged the picture into a reverse image search engine, just to be sure.

Just as Hanson noted in his thread, a search on TinEye revealed that the image in question had been posted on the internet at least 55 times, including to sites like Pinterest, Reddit and Imgur, since at least 2020. The photograph was also featured by the Daily Mail in April 2021, where it was referenced as a “metal-block shopping list from the 1940s.”

Antique fanatics also had a few things to say on forums about when the item was likely used. Some of these posters also shared similar devices for sale on Ebay and Etsy, and also noted that the grocery list was likely from the 1940s or 1950s.

Hanson added that the back was “stamped ‘Patent Pending’” and decided to do a bit more digging.

“That means that in whatever year this was made a patent application had already been filed in the U.S. but not granted. If we can find that app, it'll give us the earliest possible year of manufacture,” he wrote. “Luckily one of our antique detectives already tracked down the patent for us…”

And a quick Google search for "Benjamin Robbio patent" returned an issue of the U.S. Patent Office official gazette that detailed the newly invented grocery list:

It was described as:

A memorandum device comprising a hollow body having a top wall, indicia on the obverse face of said wall at spaced locations therealong, a one-piece supporting plate within said body having a longitudinal opening therein, a spring member secured to said plate, said spring member bridging said opening and resting on said plate at the opposite edges thereof, individual movable keys projecting through said wall, each key located to serve one of said spaced indicia and movable into at least two positions with reference to said indicia to selectively designate said indicia, a surface of each of said keys extending into engagement with said spring member at a location thereon between the edges of said opening to be tensioned and held by said spring member in one of said two selected positions.

And like Hanson pointed out, this photograph is a classic case of recycled content whose context and background has gradually deteriorated over the dozens of times it has been reshared. So while the photograph in question features a very real product, it was patented and subsequently sold in the 1950s.

Hat-tip to Hanson for his careful reporting and dynamic way of sharing with the internet how quickly rumors can be debunked if we spend a little bit of time doing the heavy lifting.

For the record, Rush Kazi, whose tweet went viral after reposting the photograph in August, said in a subsequent tweet that there was a picture in a “Simpsons group saying it was from the 20s.” Kazi then Googled it and found an article saying that it “could be from the 20s," but as we now know, it was not.

The History of the Refrigerator: Ancient Origins to Today | Whirlpool. https://www.whirlpool.com/blog/kitchen/history-of-the-refrigerator.html. Accessed 15 Aug. 2022.