Released in 1993, "Mrs. Doubtfire" starred Robin Williams as a divorced father who dresses up as a woman so he can spend time with his children. 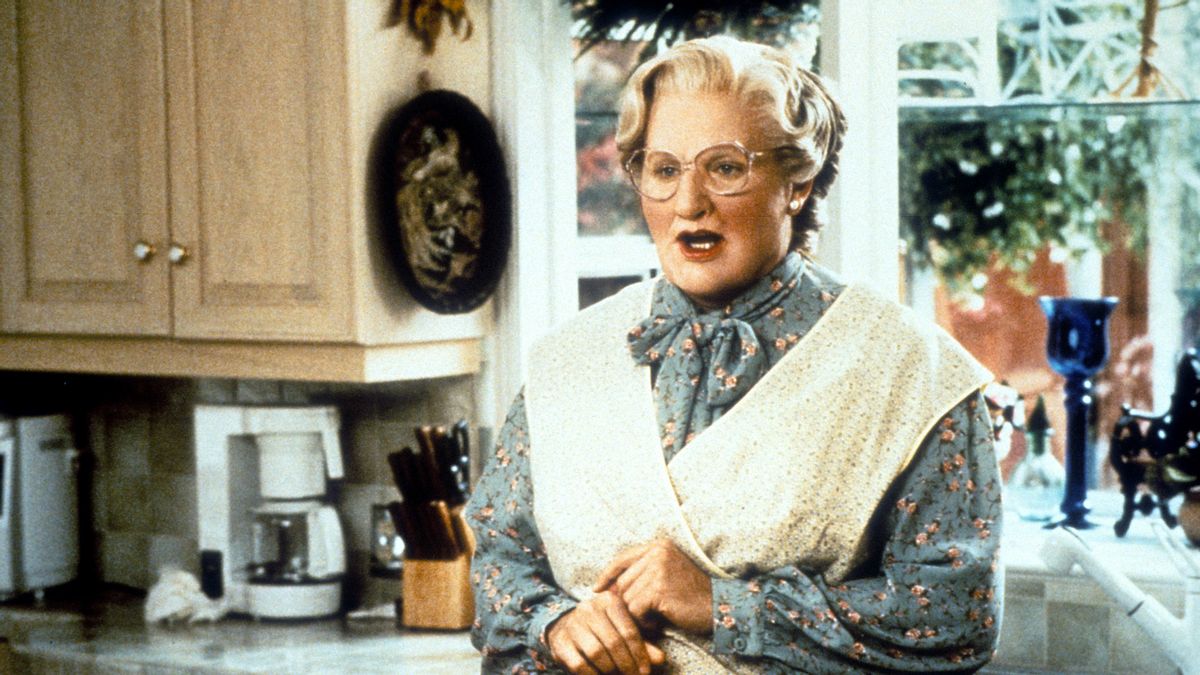 Robin Williams in the kitchen in a scene from the 1993 film, "Mrs. Doubtfire." (Photo by 20th Century-Fox/Getty Images)

On Jan. 12, 2023, Twitter user @Esqueer_, tweeted, "Republicans in multiple states are trying to cancel 'Mrs. Doubtfire' and label any performance of it as sexually explicit as part of their proposed bans on drag. This is where we're at in 2023."

The tweet from @Esqueer_ was accompanied by the poster for the 1993 film.

"Mrs. Doubtfire" starred actor Robin Williams as a divorced father who dresses up as an older woman to become a nanny in disguise, so that he can fool his ex-wife and spend more time with his children. The actor died in 2014.

A second tweet from @Esqueer_ included a link to a bill as well as two screenshots of the legislation. The tweet read, "Just in case anyone thinks I'm joking, this is Arizona's proposed bill SB1030. NO PERFORMANCES OF 'MRS. DOUBTFIRE' NEAR SCHOOL PROPERTY OR BETWEEN THE HOURS OF 1AM AND 12 NOON ON SUNDAYS."

Despite what was claimed in these tweets, the cited bill made no mention of "Mrs Doubtfire," as some users noted:

Further, the bill did not seem to have anything to do with the film or the Broadway musical of the same name, which was scheduled to tour the U.S. in 2023.

Twitter users brought the tweets to the attention of Randi Mayem Singer, the screenwriter for "Mrs. Doubtfire." Singer responded.

Singer's tweet read, "Daniel Hillard put on a dress to be with his kids. If being with his kids required him to wear a gorilla suit, he'd have worn a gorilla suit. But even so, trans is not synonymous with drag. And using this movie to dehumanize trans people or drag artists is absurd and hateful."

A Closer Look at the Bill

According to the official website for the Arizona State Legislature, SB1030's short title showed as, "drag performers; drag shows; regulation."

On LegiScan.com, the website said that SB1030 was introduced on Jan. 10, 2023, by a state Sen. Anthony Kern, who had just assumed office one day before. He previously served in the Arizona state House of Representatives.

The bill's text showed an attempt to enact regulations on various aspects of drag shows. For example, one part of the bill pushed for permits to be needed for just about anyone associated with drag entertainment in the state. According to the bill, permits would be needed for shows, providers, managers, and performers.

Again, the bill was just introduced on Jan. 10, so it's unclear what might happen next with the controversial piece of legislation.

Drag 'Cast in a False Light'

Aside from the rumor about "Mrs. Doubtfire," The Associated Press previously reported about the misleading way that drag queens were being portrayed in the world of right-wing politics:

The art form has been cast in a false light in recent months by right-wing activists and politicians who complain about the "sexualization" or "grooming" of children. Opponents often coordinate protests at drag events that feature or cater to children, sometimes showing up with guns. Some politicians have proposed banning children from drag events and even criminally charging parents who take their kids to one.

Performers and organizers of events, such as story hours in which colorfully clad drag queens read books to children, say the protesters are the ones terrorizing and harming children and making them political pawns — just as they've done in other campaigns around bathroom access and educational materials.

The recent headlines about disruptions of drag events and their portrayal as sexual and harmful to children can obscure the art form and its rich history.

McMillan, Jeff. "EXPLAINER: Drag Queens and How They Got Pulled into Politics." The Associated Press, 29 Oct. 2022, https://apnews.com/article/government-and-politics-a26e7eee15df0bbc2bb98071b683b1f4.