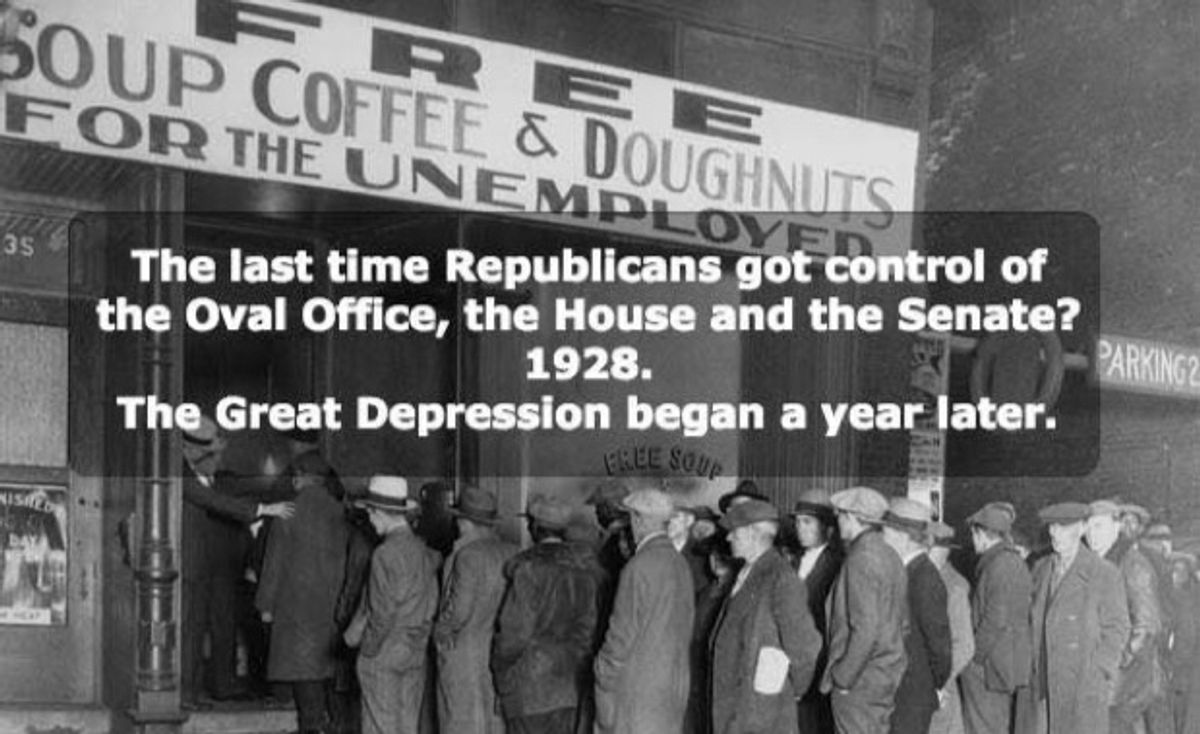 Claim:
The last time Republicans controlled the presidency and Congress was in 1928, and the U.S. sunk into the Great Depression within a year.
Rating:

Republicans controlled both the executive and legislative branches of government from 1921-30, and the stock market crash which heralded the onset of the Great Depression occurred in 1929.

Republicans have controlled both branches of government more than once since the 1920s, and the causes of the Great Depression were multi-faceted.

After the 8 November 2016 U.S. general election handed imminent control of the White House, House of Representatives, and the Senate to the Republicans, images were circulated via social media claiming political conditions had not been such since 1928, and suggesting that the result of those conditions was the onset of the Great Depression in 1929:

The last time the president, and both Congress and house were controlled by Republicans was 1928. The great depression was 1929-1938

The claim appeared to be too compelling to fact check on both sides of the aisle. Republicans embraced what looked to be a favorable political climate not seen in nearly a century, while Democrats lamented historical evidence that implied the circumstance would lead to economic ruin. Both sides were off base with respect to the image macro's accuracy on either front.

First of all, Republican control of the White House and both houses of Congress didn't begin or end in 1928 — the GOP held sway over the executive and legislative branches for all of the decade from 1921-30.

Second, that period was not the last such instance of one-party control favoring the GOP. Republicans also controlled both the executive and legislative in 1953-54, when Republican Dwight Eisenhower was President, the GOP held a clear majority in the House, and Republicans gained a slim 48 to 47 margin over Democrats in the Senate (with one Republican-leaning independent senator). And again from 2003-06, both chambers of Congress had a Republican majority while Republican George W. Bush occupied the White House. (Those conditions also existed for part of the period from 2001-02, during which time the Senate switched majorities from Democratic to Republican and back to Democratic).

The second portion of the claim is stickier, essentially asserting that the result of Republican control of the U.S. government during the 1920s was the onset of the Great Depression. Although one might validly argue that Republican policies of the 1920s had something to do with bringing about the Great Depression, it's difficult to assess what measure of blame should be meted out to them, given that the economic downturn's causes were many and varied, some of its elements antedated the 1920s, and the Depression lingered on well after the nation switched to Democratic leadership in 1933.

The Great Depression of the 1930s was a global event that derived in part from events in the United States and U.S. financial policies. As it lingered through the decade, it influenced U.S. foreign policies in such a way that the United States Government became even more isolationist.

The origins of the Great Depression were complicated and have been much debated among scholars. The initial factor was the First World War, which upset international balances of power and caused a dramatic shock to the global financial system. The gold standard, which had long served as the basis for national currencies and their exchange rates, had to be temporarily suspended in order to recover from the costs of the Great War, but the United States, European nations, and Japan put forth great effort to reestablish it by the end of the decade. However, this introduced inflexibility into domestic and international financial markets, which meant that they were less able to deal with additional shocks when they came in the late 1920s and early 1930s. The U.S. stock market crash of 1929, an economic downturn in Germany, and financial difficulties in France and Great Britain all coincided to cause a global financial crisis. Dedication to the gold standard in each of these nations and Japan, which only managed to return to it in 1930, only made the problem worse and hastened the slide into what is now known as the Great Depression.

The key factor in turning national economic difficulties into worldwide Depression seems to have been a lack of international coordination as most governments and financial institutions turned inwards. Great Britain, which had long underwritten the global financial system and had led the return to the gold standard, was unable to play its former role and became the first to drop off the standard in 1931. The United States, preoccupied with its own economic difficulties, did not step in to replace Great Britain as the creditor of last resort and dropped off the gold standard in 1933. At the London Economic Conference in 1933, leaders of the world’s main economies met to resolve the economic crisis, but failed to reach any major collective agreements. As a result, the Depression dragged on through the rest of the 1930s.

A lack of economic oversight by the U.S. government and agricultural overproduction also played a large role in what would become an prlonged period of suffering in United States:

During the 1920s there was no national economic planning or any significant watchdog agency to monitor the U.S. economy. The Republican administrations of Presidents Warren G. Harding (1865–1923; served 1921–23), Calvin Coolidge (1872–1933; served 1923–29), and Herbert Hoover (1874–1964; served 1929–33) followed a laissez-faire approach. Laissez-faire refers to the deliberate absence of government regulation. None of these presidents attempted to regulate the buying or selling of stocks and bonds; they exercised no controls over banking, manufacturing, or agricultural production. Likewise, no attempt was made to gather or analyze statistics that would have pointed to increasing problems in stock investing and overproduction of agricultural products and consumer goods. This approach to government was a major contributing factor in the Great Depression.

U.S. farmers had been overproducing since World War I (1914–18). During that war Herbert Hoover was the federal government's food administrator. He encouraged large increases in American agricultural production during the war because European production was greatly disrupted and the United States needed to supply its European allies with food. Before the war U.S. farmers produced less than 690,000 bushels of wheat yearly, but by the war's end they were producing 945,000 bushels per year ... The use of machinery improved farm technology. Tractors replaced horses and mules ... Because of the large U.S. crop and meat surpluses, prices for farm products fell dramatically.

Regardless, the Republican Party, the United States, and the world as a whole are all vastly different than they were eighty-eight years ago, so offering superficial comparisons between elements from now and back then is not likely to contribute much substance to today's political discourse.