A tweet claiming that all Republican Speakers of the House involved with Bill Clinton's impeachment experienced sex scandals was mostly accurate. 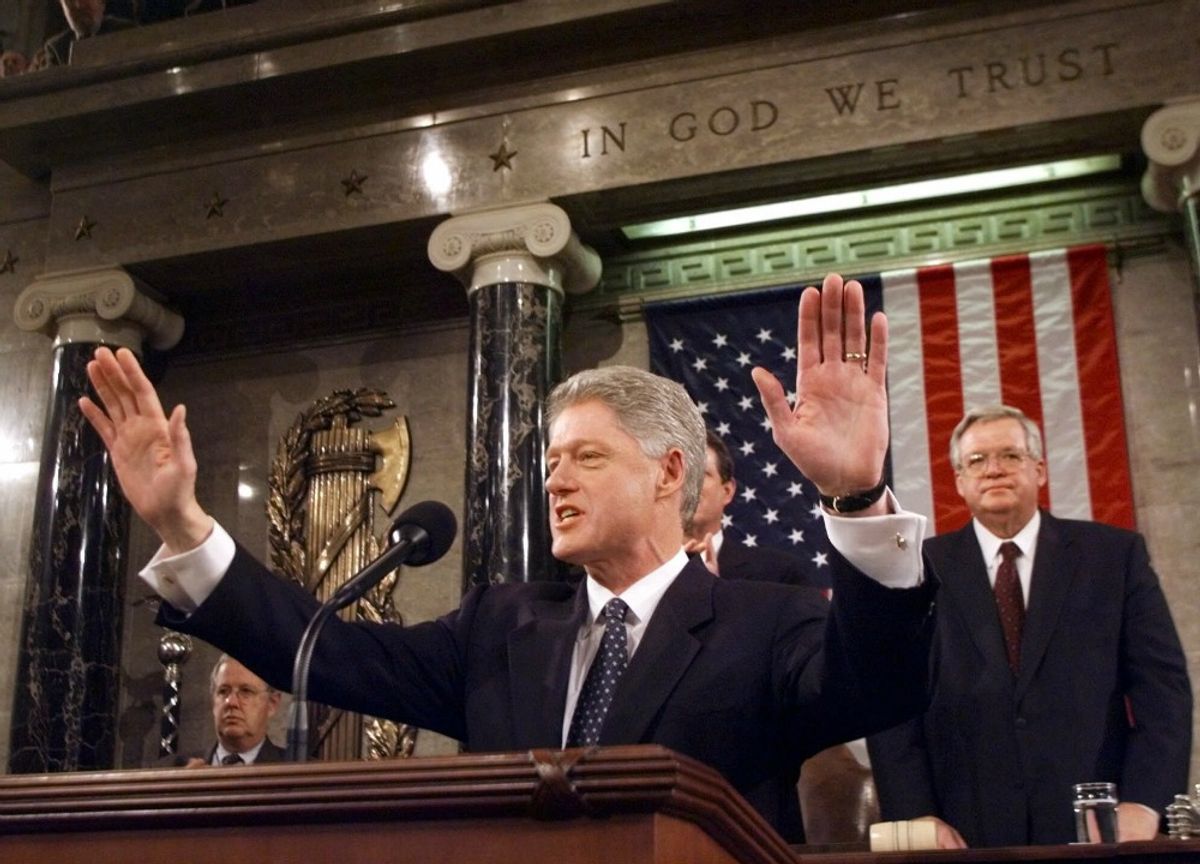 Claim:
All three Speakers of the House involved with the impeachment of President Clinton later had sex scandals of their own.
Rating:

Whether Gingrich's 2007 admission of an affair during the 1998-1999 impeachment qualifies as a sex scandal.

On 27 April 2016, the popular Twitter account @WillMcAvoyACN published the above-reproduced tweet, which said that every Republican Speaker of the House involved with the impeachment of President Bill Clinton was subsequently felled by a sex scandal:

Reminder: Every Republican Speaker of the House who oversaw the impeachment of Bill Clinton has now been found to be a part of a sex scandal

The impetus for the tweet was probably the recent sentencing of former House Speaker Dennis Hastert, who was accused of sexually abusing at least four teenaged boys while working as a wrestling coach, then subsequently convicted of illegally structuring bank accounts to pay off accusers.

A 2 May 2016 New York Times profile of Hastert's fall from grace pointed out that his appointment to the Speaker position was a result of cascading sex scandals:

It was a sex scandal that put Mr. Hastert into the top House job in the first place. Robert Livingston, a Louisiana Republican in line to replace Newt Gingrich, was forced to step aside after accusations of marital infidelity as the House impeached President Bill Clinton in 1998. Republicans settled on Mr. Hastert, then a deputy to the feared House whip, Tom DeLay of Texas, a figure so polarizing he could not move into the speaker’s chair.

As accusations against Hastert emerged in mid-2015, the Chicago Tribune reported that he was "dubbed the 'Accidental Speaker,' plucked from a junior position in the GOP leadership in December 1998 during the chaotic moments after newly nominated Republican Speaker Bob Livingston of Louisiana disclosed an extramarital affair and turned down the post":

As House speaker from 1999 to 2007, the husky, gray-thatched Illinoisan was just two heartbeats away from the presidency. At 73, he has been in recent years working mostly behind the scenes as a Washington power broker.

The arc of Clinton's impeachment was long, arguably commencing with the President's appearance in front of a federal grand jury on 18 August 1998 (during Newt Gingrich's tenure as Speaker). By November 1998, Gingrich resigned from his post as Speaker, facing a challenge from Rep. Bob Livingston:

Rep. Newt Gingrich (R-Ga.), the charismatic soul of the Republican Revolution whose members turned on him after unexpected losses in Tuesday's election, announced yesterday he will quit as speaker of the House.

His stunning exit came only hours after longtime friend Rep. Bob Livingston (R-La.) told reporters he intended to challenge Gingrich when House Republicans meet Nov. 18 to pick their leaders for the 106th Congress.

President Bill Clinton's impeachment was complicated by sex scandals affecting House leadership at the same time, but he was formally impeached on 19 December 1998:

Mr. Clinton became only the second President in history to be impeached, in a stunning day that also brought the resignation of the incoming Speaker of the House, Robert L. Livingston.

At 1:22 P.M., the House of Representatives approved, 228 to 206, the first article of impeachment, accusing Mr. Clinton of perjury for misleading a Federal grand jury last Aug. 17 about the nature of his relationship with a White House intern, Monica S. Lewinsky ... American politics seemed to be descending into the very cannibalism that Speaker Newt Gingrich had warned of when he was toppled a month ago.

Hours before Mr. Clinton was impeached for his efforts to cover up his affair with Ms. Lewinsky, [then-incoming Speaker of the House, Robert L.] Livingston, who had been chosen to succeed Mr. Gingrich, shocked the House by announcing he would leave Congress because of revelations of his own adulterous affairs.

Still, it was Mr. Livingston today who called for Mr. Clinton's resignation from the House floor. Charging that Mr. Clinton had undermined the rule of law and damaged the nation, Mr. Livingston said, "I say that you have the power to terminate that damage and heal the wounds that you have created. You, sir, may resign your post."

As some Democrats shouted back, "You resign," the Louisiana Republican said, "I was prepared to lead our narrow majority as Speaker and I believe I had it in me to do a fine job. But I cannot do that job or be the kind of leader that I would like to be under current circumstances. So I must set the example that I hope President Clinton will follow."

With a sex scandal now consuming one of their own, the House's impeachment debate turned more than ever into a discourse on sin and morality in politics.

Hastert assumed the role of Speaker in the vacuum left by Livingston's swift downfall, and his tenure began on 6 January 1999. In February 1999, Clinton was acquitted:

Five weeks later, on February 12, the Senate voted on whether to remove Clinton from office. The president was acquitted on both articles of impeachment. The prosecution needed a two-thirds majority to convict but failed to achieve even a bare majority. Rejecting the first charge of perjury, 45 Democrats and 10 Republicans voted “not guilty,” and on the charge of obstruction of justice the Senate was split 50-50. After the trial concluded, President Clinton said he was “profoundly sorry” for the burden his behavior imposed on Congress and the American people.

Three people could be considered Speaker of the House during Clinton's impeachment: Newt Gingrich, Bob Livingston, and Dennis Hastert. Livingston's sex scandal took place at the same time as the impeachment, and Hastert's came to light years after he left office.

Whether Gingrich was technically involved in a "sex scandal" was more of an issue of semantics. In a March 2007 interview, Gingrich (then mulling a run for President) admitted to participating in an extramarital affair at the time of Clinton's impeachment:

Former House Speaker Newt Gingrich was having an extramarital affair even as he led the charge against President Clinton over the Monica Lewinsky affair, he acknowledged in an interview with a conservative Christian group.

"The honest answer is yes," Gingrich, a potential 2008 Republican presidential candidate, said in an interview with Focus on the Family founder James Dobson to be aired Friday, according to a transcript provided to The Associated Press. "There are times that I have fallen short of my own standards. There's certainly times when I've fallen short of God's standards."

Gingrich argued in the interview, however, that he should not be viewed as a hypocrite for pursuing Clinton's infidelity.

"The president of the United States got in trouble for committing a felony in front of a sitting federal judge," the former Georgia congressman said of Clinton's 1998 House impeachment on perjury and obstruction of justice charges. "I drew a line in my mind that said, 'Even though I run the risk of being deeply embarrassed, and even though at a purely personal level I am not rendering judgment on another human being, as a leader of the government trying to uphold the rule of law, I have no choice except to move forward and say that you cannot accept ... perjury in your highest officials."

Gingrich's dalliances weren't necessarily a "sex scandal" in that his dalliances didn't dominate headlines, and he readily admitted (after the fact) that he had been having an affair at the same time that he was pursuing the impeachment of President Clinton for similar reasons.

It is technically true that the Speakers of the House during Clinton's impeachment eventually had public sex scandals. Hastert was criminally charged and sentenced to prison, House Speaker-designate Livingston's bid to assume the role failed when his own infidelities were exposed, and Gingrich later admitted to extramarital affairs of his own.

Newport, Frank.   "Gingrich An Unpopular Figure During His Tenure As Speaker." Gallup.   11 November 1998.