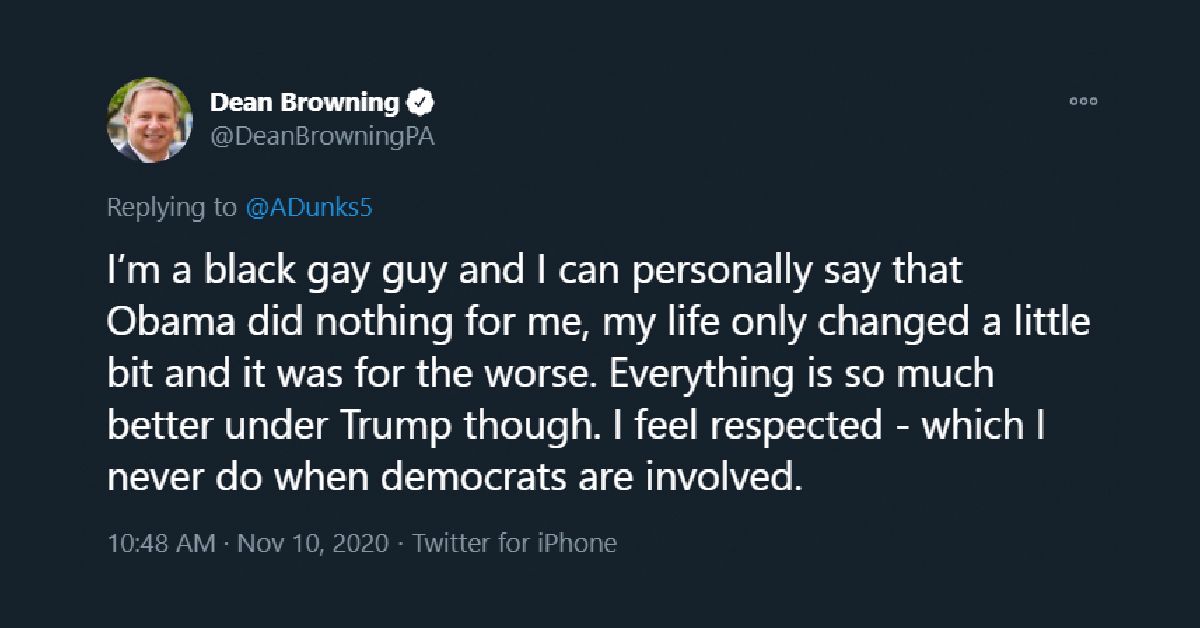 A tweet from former Lehigh County Commissioner Dean Browning led a handful of Twitter users to do a double-take. Earlier in 2020, Browning lost the Republican primary race for U.S. House Pennsylvania District 7. He described himself in his Twitter bio as: "A proud pro-life & pro-2A Christian conservative dedicated to enacting common sense solutions to Keep America Great."

On Nov. 10, 2020, someone -- presumably Browning -- controlling his verified Twitter account tweeted: "I’m a black gay guy and I can personally say that Obama did nothing for me, my life only changed a little bit and it was for the worse. Everything is so much better under Trump though. I feel respected - which I never do when democrats are involved."

The tweet came in response to another Twitter user who responded to one of Browning's pinned tweets. Twitter users speculated that the "black gay guy" tweet was apparently to be meant to be issued from an alternate account controlled by Browning under the pretense of being a gay black man who supports U.S. President Donald Trump. Around five hours after the tweet, a user noticed it, and it began to spread virally, picking up thousands of retweets and likes. Browning then deleted the tweet. Soon after deleting it, he tweeted that he was quoting a message he received earlier from another follower. The story of the "black gay guy" tweet did not end there, however.

An account named @DanPurdy322 is believed by Twitter users to be an alternate account maintained by Browning, meaning the "black gay guy" tweet may have been meant to be posted under the @DanPurdy322 persona. After Browning deleted that tweet, @DanPurdy322 tweeted two videos, with @DanPurdy322 claiming to have sent Browning the message that Browning tweeted.

We found other instances of @DanPurdy322 responding to someone who replied to Browning.

Some Twitter users were quick to note that @DanPurdy322 bore a strong resemblance to William Holte, purported to be singer Patti LaBelle's son. Holte's Facebook account, named facebook.com/william.m.holte in the URL, but Byl Holte by name, contained the same cartoonish profile image from Twitter. @DanPurdy322 also tweeted that "common sense is the solution," which bore a striking similarity to the name of a website listed in Browning's Twitter bio: Common Sense Solutions.

In the past, Browning has tweeted about the "weapon of war" capabilities of Twitter:

Browning's past tweets also included the idea of a "muzzled" U.S. Rep. Ilhan Omar, which included a monkey emoji. Browning also tweeted that Omar's face needed to be "put on a wanted poster" to hang in post offices. He also tweeted that Joe Biden turned his son Hunter into a "crackhead," questioned the COVID-19 death toll, said that "so many other crimes are more deserving of the national eye than Breonna Taylor," spread mail-in voting conspiracy theories ahead of the 2020 U.S. presidential election, and called MSNBC host Joy Reid "stupid," "racist," and a "cow."

Other tweets from Browning's verified Twitter account included the following, one of which appeared to push the QAnon conspiracy theory: In August, the Republican-led U.S. Senate Intelligence Committee issued its fifth and final report on Russia’s efforts to interfere in the 2016 U.S. presidential election, detailing the extent to which Trump campaign officials had involvement in the matter. The report detailed fake American personas that were used by Russia to influence real Americans on social media. Of that, Browning tweeted: