Did a Viewer Spot This TV Reporter’s Cancer?

A handful of television personalities have been diagnosed with cancer after receiving a tip from viewers. 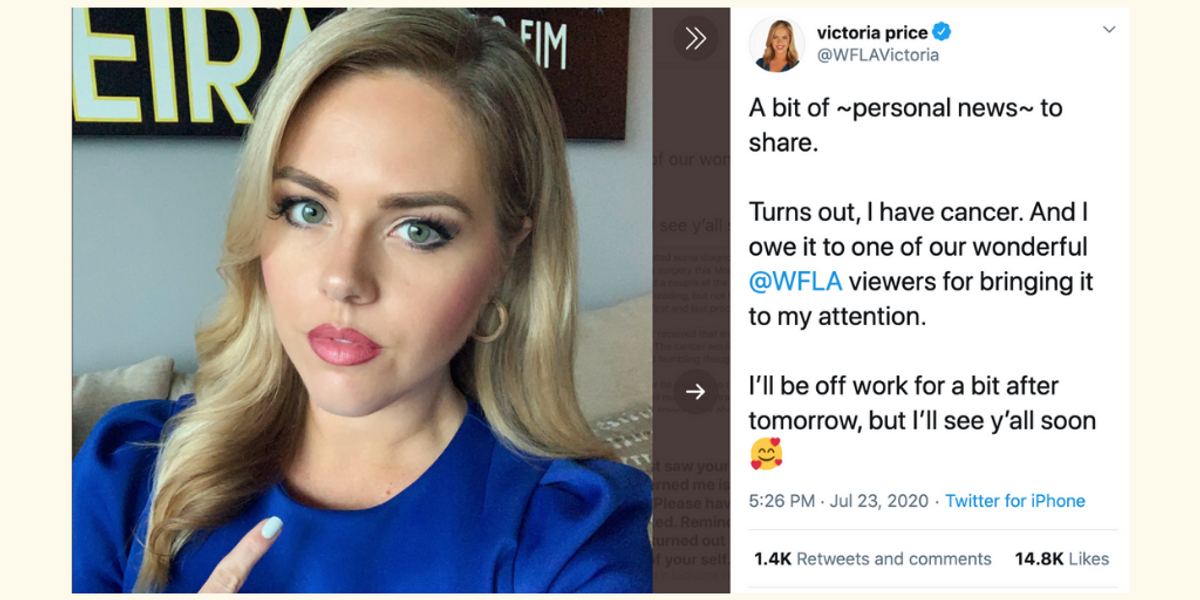 Claim:
A news reporter in Florida was diagnosed with cancer after a viewer spotted a lump in her throat during a broadcast.
Rating:

An investigative reporter with WFLA News Channel 8 in Tampa, Florida, was diagnosed with cancer after a viewer contacted her to point out a noticeable lump in her throat.

Snopes spoke with Victoria Price, who confirmed in an email that this claim is true. The broadcast journalist also shared her story in a Twitter post on July 23, 2020, that read:

As a journalist, it’s been full throttle since the pandemic began. Never-ending shifts in a never-ending news cycle. Adjusting to remote workflows and in my case, taking on a new investigative role. We were covering the most important health story in a century, but my own health was the farthest thing from my mind.

Until a viewer emailed me last month. She saw a lump on my neck. Said it reminded her of her own. Hers was cancer. Turns out, mine is too.

Price went on to say that COVID-19 responses created some “diagnostic delays,” but that she will have undergone surgery by mid-July 2020 to remove the tumor, thyroid, and a couple of nearby lymph nodes. Price’s doctor told her that the cancer is spreading, but “not too much,” and they are both hopeful that this will be the journalist’s “first and last procedure.”

“Had I never received that email, I never would have called my doctor. The cancer would have continued to spread. It’s a scary and humbling thought,” wrote Price.

The situation began when Price received an email from a concerned viewer, who asked the reporter to have her thyroid checked: When asked by another reader to point out the lump, Price shared an image of herself during a broadcast, pointing out a “subtle protrusion” that showed the tumor in the middle of her thyroid, pushing her thyroid gland “up and out.” Snopes is awaiting a response from Price regarding what type of cancer she was diagnosed with, so we will update the story once we hear back. WFLA shared Price’s post on its Twitter account, wishing the broadcast journalist a “speedy recovery.”

Price is not the first television personality to have been diagnosed with cancer after receiving a viewer comment. In 2019, “Inside Edition” host Deborah Norville underwent surgery to remove a cancerous thyroid nodule after a viewer spotted a lump on her neck during a broadcast, reported Today at the time. Tarek El Moussa, host of HGTV's “Flip or Flop,” was also diagnosed with Stage 2 thyroid cancer after a nurse spotted a lump on his neck and contacted the show's producers.

In an Aug. 4 interview, Price told TODAY that she was feeling “90% back to normal,” and planned to launch a foundation to spread awareness of thyroid cancer in women.

Updated to include Aug. 2020 interview with TODAY.