Viral photographs showed meager, unappetizing meals served to flood victims in Louisiana by the American Red Cross in 2016. They weren't the only images of Red Cross rations out there, however. 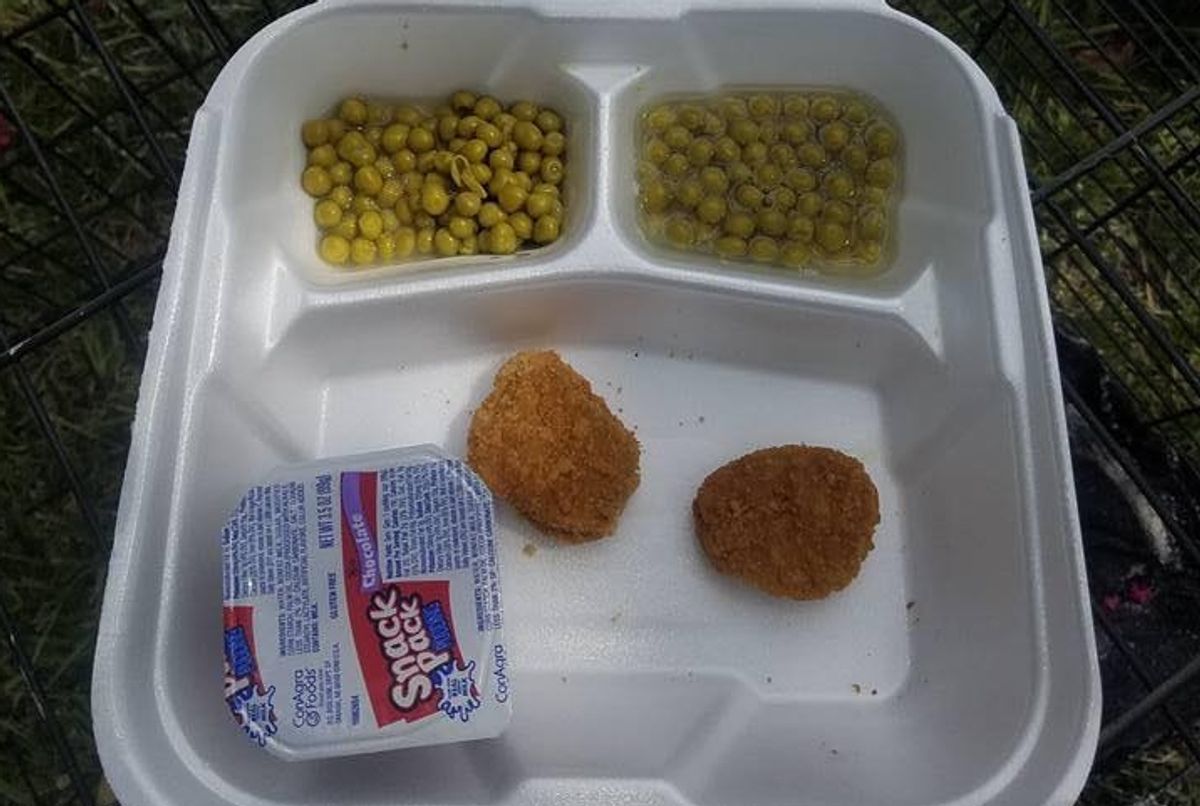 Photographs of emergency meals served to flood victims in Louisiana included some that looked less than appetizing, and at least one that the Red Cross admitted contained unacceptably small portions due to an error in preparation.

The meals shown in social media-circulated images weren't representative of what every flood victim received.

In mid-August 2016, a massive storm system dropped unprecedented amounts of rain on southern Louisiana, resulting in massive flooding that caused billions of dollars worth of damage and displaced thousands of people from their homes. The American Red Cross termed the flood the worst U.S. natural disaster since Hurricane Sandy in 2012.

As usual in such circumstances, it fell to the American Red Cross, in cooperation with other charitable organizations and local and federal government agencies, to provide emergency sustenance and shelter to those left homeless or in need by the floods. The Red Cross estimated they served between 20,000 and 30,000 meals a day in the disaster area, according to a spokesman.

Some  meal recipients took to social media to express their disappointment with the quantity and quality of the distributed food, however, as exemplified in this Facebook post dated 25 August 2016:

Given that tens of thousands of boxed hot meals were being served every day by an all-volunteer workforce, one would expect to see variations in the presentation and quality of the product, as indeed there were. This photograph of a Red Cross-supplied meal served in Baton Rouge was shared via Facebook on 5 September 2016:

And here are some photographs of another Red Cross meal delivery in Baton Rouge, this post dated 4 September 2016. No disappointment was expressed by this recipient:

So, the reviews on Red Cross meals were mixed. Not all of the posts about the emergency food deliveries were negative, but the negative ones got shared via social media, prompting an investigation by Baton Rouge television station WAFB into the workings of the Red Cross food service operation. Reporter Kiran Chawla, spoke with flood victims who described their dining experiences, happy and unhappy, and quizzed Red Cross spokesman Jay Bonafede on the adequacy of the organization's relief efforts:

The Red Cross acknowledged that some food boxes went out with ridiculously small portions: the result of an error, Bonafede said, which was subsequently corrected. The user who posted the chicken nuggets and peas photograph said he received an apology from the organization.

As to the quality of the meals — all of which, under the circumstances, had to be prepared using canned and packaged products — Bonafede said thousands of volunteers were doing their best to produce and deliver two to three hot meals per day to every person in need:

"It's not going to be home cooking because you cannot do home cooking for 10,000+ people," said Bonafede. "But this is the best way and most efficient way to get a nutritious, hot meal to people who have no power and their home has been destroyed."

Bonafede added it costs too much to prepare home cooked meals for thousands of people. Red Cross estimates it will cost them $35 to 440 million for disaster relief to Louisiana's flooding.

The Red Cross came under general criticism for what some in Louisiana termed its "bureaucratic" approach to disaster relief, according to a 22 August 2016 report in The Advocate:

Lipsey is just one of many volunteers and evacuees who has recently voiced frustration at the policies of the American Red Cross, which is either managing or providing support to many of the regional shelters for evacuees. Lipsey and others say the organization is letting bureaucracy get in the way of common sense by denying offers for hot meals and turning away donations and volunteers that didn't go through their own channels, even when it's desperately needed.

Gov. John Bel Edwards' office acknowledged some of the problems. A spokesman for the office said they were addressing the issues and would reevaluate the state's partnership with the organization in the future.

But a Red Cross spokesperson replied that the agency's relief operations were bound by stringent state regulations:

Nancy Malone, a spokeswoman for the American Red Cross, said there's misinformation being spread around,  and people are confusing the Red Cross with their partner organizations. She also said there are liabilities to feeding people food that doesn't come from certified vendors, which is why some offers to cook hot meals have been turned away.

But she categorically rejected allegations that the Red Cross has thrown away donations.

"If you came today and said you have 5,000 meals to offer, well, we already had food delivered today, let's find a way to arrange for you to help someone else or come back another day," Malone said. "It has to be about coordination. We are held accountable to state regulations. This food has to come from a certified kitchen."

The American Red Cross currently rates an overall quality score of 83.33 (out of 100) from the charity evaluation web site Charity Navigator.