Does Rebecca Black's 'Friday' Have No Dislikes on YouTube?

While plenty of commenters appeared to understand what was happening, it's important to remember that not all users are alike. 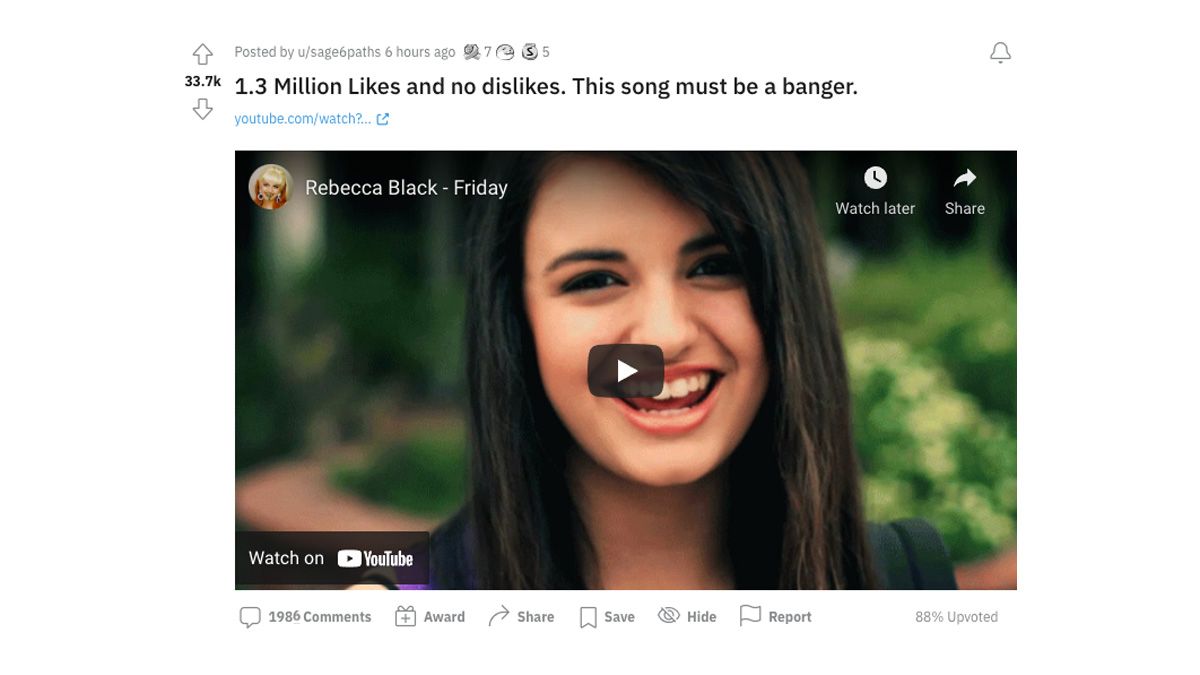 It's false to say that Rebecca Black's song Friday had no dislikes on YouTube. (Image Via Reddit)

However, u/sage6paths, the user who created the Reddit post, appeared to be making a joke and knew the truth of why her video showed no dislikes. Others on Reddit and in the video's YouTube comments also understood why the video showed no dislikes. However, some users were still perhaps perplexed. It's important to remember that not all readers are up-to-date on the latest tech news. Sometimes, the "obvious" is not always obvious to everyone.

Here's why Black's "Friday" doesn't show a number next to the "Dislike" button.

In November 2021, it was announced that the number of dislikes on all YouTube videos would be hidden from public view. This policy was put into place to dissuade users from banding together to harass content creators.

The act of gathering together and coordinating dislikes is often referred to as "brigading" or "ratioing." The idea from those seeking to "ratio" a YouTube video is to see how high they can get the clip's dislike count to be compared to the number of likes. (On Twitter, the aim of trying to "ratio" a tweet is to make it have more replies than it does retweets and likes.)

For those unfamiliar with the "Dislike" button, it's shown under YouTube videos as a thumb pointing down: As of November 2021, a new YouTube policy now hides the number of dislikes on all videos in order to prevent harassment and brigading.

After the policy was put into place, a number no longer showed up for dislikes under Black's "Friday" or any videos at all. The "Dislike" button still showed up and functioned as usual. However, the public wouldn't be able to see the number. The dislike counts can now only be seen by content creators who have credentials to manage accounts.

On Nov. 11, NBC News reported on how YouTube came up with the idea:

The updated feature was sparked by an experiment YouTube conducted earlier this year to see whether changes to the dislike button could help protect content creators from harassment and "dislike attacks," where viewers purposely dislike a video to drive up the count.

Researchers at the site found that if the dislike count is hidden viewers were "less likely to target a video’s dislike button to drive up the count," a press release states.

"In short, our experiment data showed a reduction in dislike attacking behavior. We also heard directly from smaller creators and those just getting started that they are unfairly targeted by this behavior — and our experiment confirmed that this does occur at a higher proportion on smaller channels," the release says.

Before YouTube enacted the new policy, Black's song "Friday" likely had around 4 million dislikes, according to several tweets we found.

One past example of a YouTube video being brigaded was in the case of the "Ghostbusters" movie trailer in 2016. For the first time in the franchise, four leading women were cast in new roles instead of four men, which was believed to have led to a scourge of dislikes.

In sum, it's not true that Black's song "Friday" had no dislikes. In reality, YouTube had previously removed the number of dislikes on all videos as part of a new policy.