Can You Catch Leptospirosis from Rat Urine on Soda Cans? 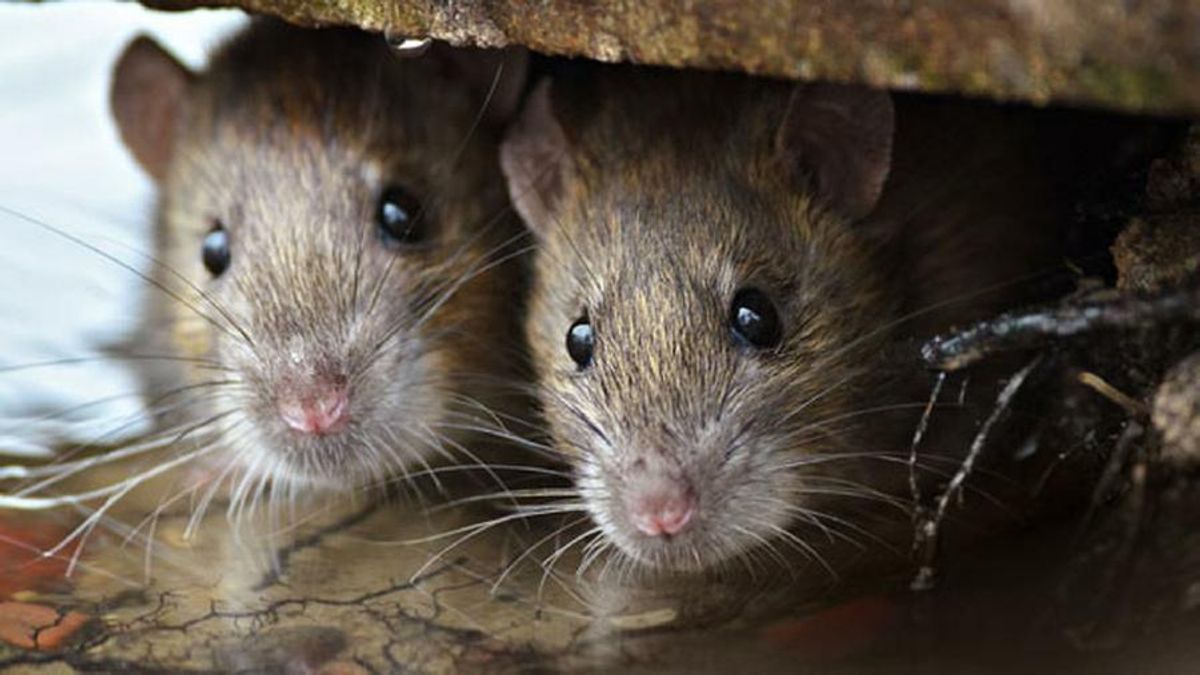 Claim:
Death and disease from leptospirosis is spread by rat urine on soda cans.
Rating:

The potentially deadly illness Leptospirosis can be contracted through exposure to the urine of diseased animals (including rats).

IMPORTANT PLEASE READ: Do Not Delete this message until it is extended to others ..

On Sunday, a family picnic, brought with them few drinks in tin. However, on Monday, two family members (who joined the picnic) were admitted to hospital and placed in the Intensive Care Unit space. One died on Wednesday.

Autopsy results concluded it hit Leptospirosis. The bacteria, known as LEPTOSPIRA interrogans, is stuck to the tin cans, and were drunk, without the use of glasses, cups or sip straws. Test results showed that the soda tin was infected from mice urine, and that had dried, the mice' urine containing Leptospirosis. It is highly recommended to rinse the parts evenly on all soda cans before
drinking it. Cans are usually stored in the warehouse and delivered direct to retail stores without cleaning.

A study shows that the top of all beverage cans are more contaminated than public toilets (full of germs and bacteria.) So, clean it with water before putting it to your mouth in order to avoid contamination. This incident happened recently in north Texas. We need to be even more careful everywhere.

A woman went boating one Sunday, taking with her some cans of coke which she put in the refrigerator of the boat. On Monday she was taken into Intensive Care Unit and on Wednesday she died.

The autopsy revealed a certain Leptospirose caused by the can of coke from which she had drunk, not using a glass. A test showed that the can was infected by dried rat urine and hence the disease Leptospirosis.

Rat urine contains toxic and deathly substances. It is highly recommended to wash thoroughly the upper part of soda cans before drinking out of them as they have been stocked in warehouses and transported straight to the shops without being cleaned.

A study at NYCU showed that the tops of soda cans are more contaminated than public toilets i.e.. full of germs and bacteria. So wash them with water before putting them to the mouth to avoid any kind of fatal
accident.

FOR ALL THOSE PEOPLE THAT DRINK STRAIGHT FROM THE CAN.

This incident happened recently in Belgium.

A woman went boating one Sunday, taking with her some cans of coke which she put in the refrigerator of the boat. On Monday she was taken into ICU and on Wednesday she died.

The autopsy revealed a certain Leptospirosis caused by the can of coke from which she had drunk straight out of, not using a glass. A test showed that the can was infected by dried rat urine and hence the disease Leptospirosis. Rat urine contains toxic and deathly substances. It is highly recommended to wash thoroughly the upper part of soda cans before drinking out of them as they have been stocked in warehouses and transported straight to the shops without with being cleaned.

A study in Spain showed that the tops of soda cans are more contaminated then public toilets i.e full of germs and bacteria. So to wash them with water is advised before putting it to the mouth to avoid any kind of fatal accident.

Please pass this on.

Whenever you buy a can of coke or whatever, please make sure that you wash the top with running water and soap or if not available drink with a straw.

A family friend's friend died after drinking a can of soda! Apparently, she didn't clean the top before drinking from the can. The top was encrusted with dried rat's urine which is toxic and obviously lethal!!!!! Canned drinks and other food stuff are stored in warehouses and containers that are usually infested with rodents and then get transported to the retail outlets without being properly cleaned.

So you know what to do from now on folks. Please forward this message to the people you care about...

Ever since the late 1990s, multiple accounts shared online have been spreading the tale of deaths purportedly caused by people who unwitting drank from soda cans whose exteriors were contaminated with rat urine. In keeping with standard scarelore, the names of the victim and where and when these tragic events happened were not included in these stories (although when writer informs us that the victim was "a family friend's friend" in an attempt to establish his connection to the events described), and a search of news items fails to turn up anything about anyone's having died in the fashion described.

By September 1999 a expanded variation of the "deadly rat excretions" theme with additional details appeared on the Internet:

A stock clerk was sent to clean up a storeroom at their Maui location. When he got back, he was complaining that the storeroom was really filthy, and that he had noticed dried mouse or rat droppings in some areas.

A couple of days later, he started feeling like he was coming down with stomach flu, achy joints, headache, and he started throwing up. He went to bed and never really got up. Within two days he was so ill and weak. His blood sugar count was down to 66 and his face and eyeballs were yellow.

He was rushed to the emergency at Pali Momi, where they said he was suffering from massive organ failure! The doctor, in ER, transferred him to Hospital and notifies all his relatives as he didn't have long to live.

In ICU of St. Francis Hospital, a team of doctors were trying desperately to stabilize him. They said that even if by some miracle he pulled through, he would need a new liver, kidneys, pancreas and bladder.

He died shortly before midnight.

None of us would have ever made the connection between his job and his death, but the doctors specifically asked if he had been in a warehouse or exposed to dried rat or mouse droppings at any time. They said there is a virus (much like Hanta virus) that lives in dried rat and mouse droppings. Once dried, these droppings are like dust, and can be easily inhaled or ingested if a person is not careful to wash their hands and face thoroughly, or wear protective gear. An autopsy is being conducted to verify the doctors' suspicions and tissue samples have been sent to the CDC in Atlanta.

Please be extremely careful to always rinse off the tops of any canned sodas or foods, and wipe off pasta packaging, cereal boxes, etc. Almost everything you buy in a supermarket was stored in a warehouse at one time or another, and stores themselves often have rodents. I worked in grocery wholesaling long enough to know that even the cleanest store has mice or rats.

Despite the vividness of the story, nothing about such a death turned up in the news, and there was no record of anyone, store clerk or otherwise, dying at the Hospital after coming in contact with rodent droppings.

Adding to this story's implausibility were the questions raised by the few checkable details offered in the text. The Hospital is in Honolulu, as is the Pali Momi Medical Center. Honolulu is on the island of Oahu. We're told the doomed store clerk was working in Maui. Someone who'd become ill on Maui likely would have first gone to a medical facility on that island even if he was later transferred by air or sea to the larger facility in Honolulu. More simply, even if a sickly store clerk in Maui did end up in the Hospital on Oahu, he shouldn't have been seen in an emergency room on Oahu; he should have first visited or been taken to an emergency room on Maui.

As the National Center for Infectious Diseases noted of this e-mail:

The e-mail report is untrue. CDC could not substantiate this report of a hantavirus infection, nor has CDC been asked to participate in an investigation of the incident described in the

Most scares contain a vague whiff of plausibility, and this is true with both stories listed above. Although there is nothing inherently toxic about urine or feces from a healthy rat, excretions from a sick rat are another kettle of fish, and perhaps that is what this bit of scarelore is addressing. There have been several rat urine stories in the news of late.

Leptospirosis, better known as Weil's disease, is a potentially deadly illness caused by bacteria passed along to humans in contact with urine from diseased animals (rats, frogs, rabbits, snakes, pigs and dogs). It is picked up rurally from swimming in contaminated lakes and reservoirs. In cities, the bacteria are passed along more easily splashing through puddles in areas that have a large rodent population might contract the disease, and eating or drinking contaminated food and water is always a danger. Leptospirosis can also be contracted by rubbing eyes with dirty hands. People with open cuts and wounds are especially vulnerable to the bacteria, as it can be picked up almost anywhere.

As the rat population in cities grows, so does the potential for contact with this disease.

Leptospirosis typically causes aches, pains and fever that go away on their own. One in ten cases includes high fever, jaundice, meningitis (inflammation of the brain lining), acute kidney failure, internal bleeding and, occasionally, death. Victims can die if they develop serious kidney or liver complications. In extreme cases, death follows three to six days after infection. The disease is treatable with antibiotics.

In November 1998 leptospirosis killed eight people and hospitalized one hundred in China. In the same month in 1997, died from the same cause out of the 300 who were infected with it. In the United States, 100 to of leptospirosis occur each year (with about half of those in Hawaii), according to the Center for Disease Control.

Another disease passed on through rat urine is hantavirus. It is transmitted to humans through breathing in particles of an infected rodent's urine, droppings or saliva. The virus becomes airborne when excrement dries. Early symptoms mimic the flu and can progress to respiratory failure. Since 1993, in the United States have been blamed on this disease.

In general, urine-encrusted soda cans are not the most likely purveyors of these diseases. Most cans of soda are packaged into cardboard boxes while still on the production line and thus aren't at any risk of contamination. Additionally, once bottlers have mixed soft drink syrup in with soda water and sweetener, they try to get the finished product to the consumer as expeditiously as possible. Soft drink bottlers don't warehouse large inventories of finished product for any length of time — freshness is everything, so the product is moved out quickly, leaving little opportunity for rodents to use the tops of cans as latrines.

Nonetheless, it's still always a good idea to wipe off cans from exposed six-packs or those dispensed from drink machines, if for no other reason than to avoid picking up something passed on by the human handlers of the product.