Is Facebook Removing a Photograph of Rashida Tlaib Being Arrested?

If you encounter something on a social network, then it hasn't been removed. 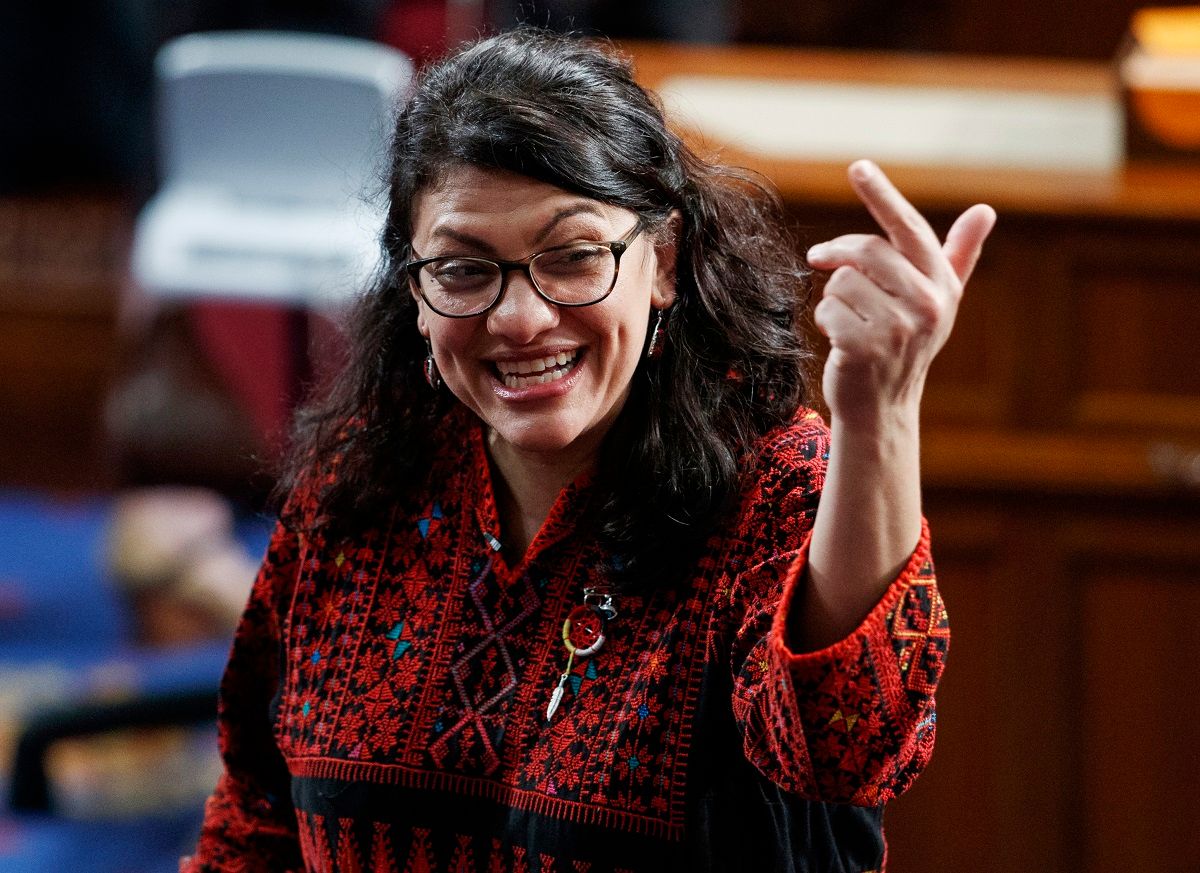 Claim:
A photograph of U.S. Rep. Rashida Tlaib being arrested is being removed from Facebook to protect her reputation.
Rating:

A photograph shows U.S. Rep. Rashida Tlaib getting arrested during a protest in support of a higher minimum wage.

This photograph is not being removed from Facebook to protect her reputation.

On 3 March 2019, the Facebook page "Woody's 360 View" posted a message asserting that a photograph supposedly showing the arrest of U.S. Rep. Rashida Tlaib was being removed from Facebook to protect the congresswoman's reputation: The viral Facebook post, which had more than 23,000 shares at the time of this writing, read: "This is Michigan Democrat Congressjihadist Rashida Tlaib being arrested. I've been told Facebook has been removing these images (to protect her reputation?), so figured I'd push back on that. Fuck Rashida and fuck the thought police."

This is a genuine photograph of Tlaib's being arrested, but it has not been removed from Facebook to protect her reputation. The image was taken on 2 October 2018 during a pro-labor rally in Detroit in support of raising the minimum wage to $15 an hour. Tlaib was one of more than a dozen protesters arrested during the event.

The photograph was taken by David Guralnick of the Detroit News and was originally accompanied by the following caption: "Rashida Tlaib, the Democratic candidate for the U.S. House of Representatives from Detroit, is taken into custody for allegedly blocking Woodward Tuesday in front of the McDonald's near Canfield while demonstrating in support of raising the minimum wage to $15 an hour and demanding a union at fast-food restaurants."

The Detroit Free Press added more context to this rally and Tlaib's arrest:

Two Democratic politicians were among those arrested at a "Fight for $15" protest for higher wages and union rights on Woodward Avenue.

Workers from local McDonald's franchises, the airport and hospitals joined the lawmakers for a march down Woodward Avenue then gathered outside the McDonald's on Woodward not far from Wayne State University. Several protesters briefly blocked the street before moving onto the sidewalk at police commands, while others moved to set up a table on the street.

A small group of protesters, including congressional candidate Rashida Tlaib and former candidate for governor Abdul El-Sayed, remained seated at the table. They were arrested by Detroit and Wayne State police, alongside 16 others, for disorderly conduct.

"I ask all of you to demand to union organize -- that's the most American thing you can do today," Tlaib told the crowd before the arrests began.

Tlaib truly was arrested during this protest, but her spokesperson told us that she was never charged with a crime. We also reached out to the Wayne State police but have yet to receive a response.

Although this image is real, the claim that it was being removed from Facebook to protect the congresswoman's reputation is not, as this Dec. 22, 2019 Facebook post and its 29,000+ shares shows nine months after we originally published this story. This category of claim -- that an image, message, or viewpoint is being removed to prevent its spread on Facebook -- is frequently invoked by internet charlatans in order to generate controversy, often in attempts to increase the likelihood that someone will share it. One easy way to check the veracity of these claims is to pause, breathe, and realize that the content supposedly being removed from Facebook is simultaneously being spread on the same platform.

Furthermore, news outlets such as ABC News have had this image available on their Facebook page since the incident took place in October 2018.

Lastly, it should be noted that Tlaib may not find this image as damaging to her reputation as these Facebook posts suggest. In fact, instead of trying to downplay her arrest, Tlaib has embraced it. On 2 October 2018, she posted a link on her Facebook page to a news article reporting on her arrest and said that "if getting arrested is what it takes to win a union, I'm happy to play a small part in solidarity with workers organizing around the clock":

I'm proud to have joined more than 1,000 brave workers from the Fight for $15 campaign standing up today and demanding a union and a $15 minimum wage. If getting arrested is what it takes to win a union, I'm happy to play a small part in solidarity with workers organizing around the clock. Here's my official statement:

"The right to organize and build unions in our country is how we fight back and win the good jobs and fair pay that powerful corporations and politicians have taken away. In Congress I will stand up to corporate greed and never back down until we all live in a just society. Together, we will achieve economic justice, protect our collective bargaining rights, and make it easier for workers like these striking cooks and cashiers to organize in a union on the job. I'm inspired by these brave workers standing up for justice, and honored to join them in this action.”