A prototype anti-rape device was fashioned as a female condom with teeth lining the inside. 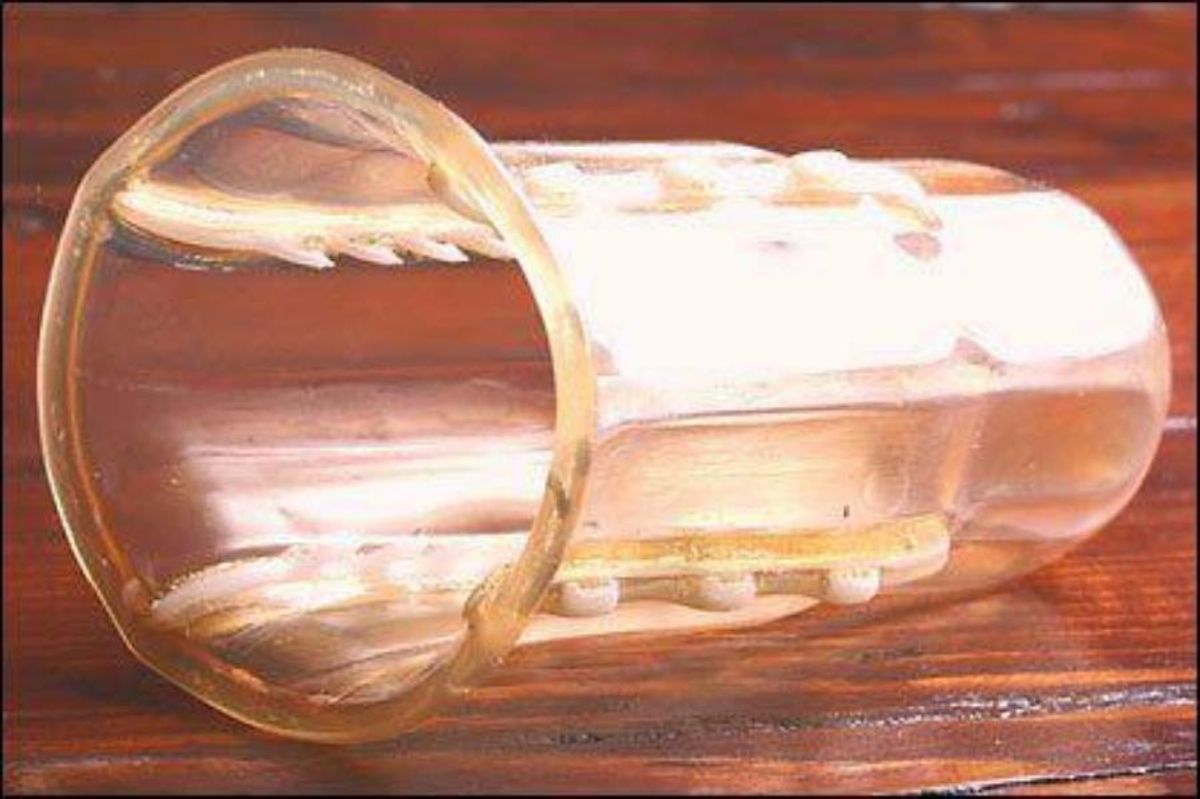 Claim:
A photograph shows an anti-rape device known as RapeX, a female condom with teeth lining the inside.
Rating:

An image pictures a prototype design for an anti-rape female condom.

The pictured device has never been marketed or made available for purchase.

In 2012, internet users began forwarding a description of a South African anti-rape device known as Rapex:

Sonette Ehlers, of South Africa (the rape capital of the world), has invented an anti-rape device that goes by the name, Rapex. The device is basically a female condom with teeth lining the inside that work just like the protective spikes in a parking garage… You can go in, but whatever you do, don’t back out. The teeth are angled so they allow penetration, but bite like a shark as the penis is removed; supposedly causing so much pain that it will give the woman a chance to escape. Further, according to Ms. Ehlers, "the device will need to be surgically removed at a hospital, which will lead to the capture of the rapist." The device shown above is a prototype for an anti-rape female condom which was unveiled in 2005, as designed by Sonnet Ehlers, a former medical technician in South Africa. Originally branded RapeX, the device's identification was changed to Rape-aXe due to a conflict with the European Union's warning system of similar name.

Various news article reported of the device's introduction that:

"Nothing has ever been done to help a woman so that she does not get raped and I thought it was high time," Sonette Ehlers, 57, said of the "rapex", a device worn like a tampon that has sparked controversy in a country used to daily reports of violent crime.

Ehlers said the "rapex" hooks onto the rapist's skin, allowing the victim time to escape and helping to identify perpetrators.

"He will obviously be too preoccupied at this stage," she told reporters. "I promise you he is going to be too sore. He will go straight to
hospital."

The device, made of latex and held firm by shafts of sharp barbs, can only be removed from the man through surgery which will alert hospital staff, and ultimately, the police, she said.

Once it lodges, only a doctor can remove it — a procedure Ehlers hopes will be done with authorities on standby to make an arrest.
"It hurts, he cannot pee and walk when it's on," she said. "If he tries to remove it, it will clasp even tighter ... however, it doesn't break the skin, and there's no danger of fluid exposure."

It also reduces the chances of a woman falling pregnant or contracting AIDS and other sexually transmitted diseases from the attacker by acting in the same way as a female condom.

"The ideal situation would be for a woman to wear this when she's going out on some kind of blind date ... or to an area she's not comfortable with," she said.

Ehlers, who showed off a prototype, said women had tried it for comfort and it had been tested on a plastic male model but not yet on a live man. Production was planned to start [in 2006].

However, even though the the Rape-aXe anti-rape condom was promoted online and announced as about to go into production eleven years ago, we've found no indication that it has ever been marketed to the public nor any announcement confirming if or when it will be made available for purchase. CNN reported in 2010 that Ehlers planned to distribute 30,000 of the devices in South Africa during the upcoming World Cup football matches and hoped to make them available for sale after a "trial period," but we have found no report suggesting that the product has ever been released to vendors.

In January 2017, a GoFundMe campaign was launched with a stated goal of continuing to develop a Rape-aXe product and bring it to market. As of 2020, the campaign was still far short of its goal of raising $310,000.

Update [05/08/20]: Updated with mention of Rape-aXe GoFundMe campaign and link to company website.