A single sockeye salmon found in a Canadian lake in 2015 did test positive for trace amounts of Fukushima radiation, but this is not a demonstrable health concern. 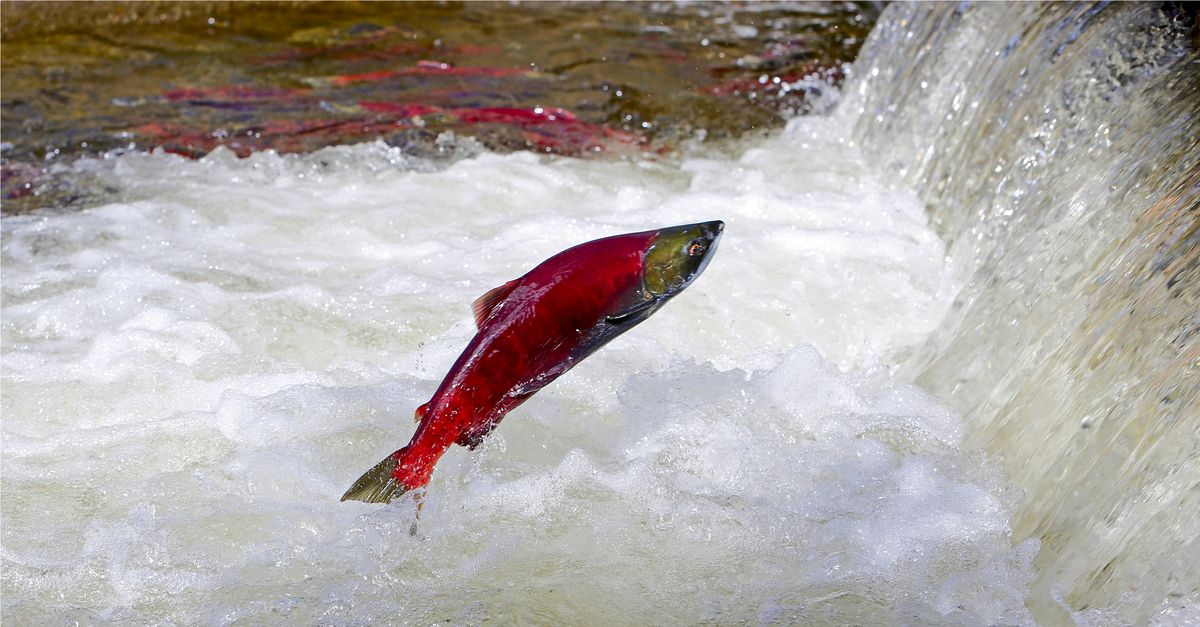 Claim:
The first "radioactive salmon" attributed to the Fukushima nuclear disaster have been found in British Columbia, Canada, posing a risk to human health.
Rating:

A single salmon found in the Osoyoos Lake in British Columbia in 2015 (first reported in November 2016) had low but detectable levels of the radioactive isotope cesium-134, universally acknowledged as a marker for Fukushima radiation.

This single fish, whose radiation levels were well below any metric used by any government agency to gauge exposure risk, remains the only salmon specimen to test positive for Fukushima radiation in North America; the actual amount of radiation you would be exposed to from this fish — should more exist — would be roughly equal to the amount you would get from eating any salmon as a result of naturally occurring radioisotopes.

On 10 February 2017, OrganicAndHealthy.org published a story with the frightening headline "Fukushima: First Images Emerge Of Radioactive Salmon In Canada". While this post did, in fact, come with a stock image of Canadian salmon, it did not deliver on its promise of visual evidence of radioactive salmon, instead providing lazily researched, error-riddled assertions based entirely on others’ flawed reporting.

Bad news for everyone – the first radioactive salmon have been found in British Columbia, Canada and there are pictures to prove it.

After researchers realized over a third of the world’s oceans were contaminated from the Fukushima rector’s [sic]  explosion, a team of researchers from the University of Victoria started investigating radioactive samples of salmon.

The American West Coast is also contaminated, and traces of seaborne Cesium 123 [sic, cesium-123 has a half life of 5 minutes and is irrelevant to this discussion, but we will assume the author meant cesium-134] (the indicator of Fukushima nuclear contamination) can still be detected in the ocean waters. [...]

According to the tests, the samples from the Oregon coast measured around 0.3 becquerels per cubic meter for cesium 134.

Cesium-134 is a radioactive isotope formed principally by man-made activity, whose only plausible source on Earth, currently, is the Fukushima disaster. It decays at a relatively fast rate and therefore cannot be tied previous nuclear disasters or atomic testing.

The narrative presented by OrganicAndHealthy.org conflates two issues: the presence of cesium-134 in marine waters off of the coast of western North America, and the presence of cesium-134 in North American salmon. Becquerels per cubic meter, cited above, are used to assess the concentration of radioactive isotopes in a volume of liquid, while becquerels per kilogram would be the appropriate for measuring its presence in fish.

These issues are likely conflated because news of both radioactive salmon and radioactive marine waters in North America were reported together by a number of media outlets in December 2016. Here's an example from USA Today:

Cesium-134, the so-called fingerprint of Fukushima, was measured in seawater samples taken from Tillamook Bay and Gold Beach in Oregon, according to researchers from the Woods Hole Oceanographic Institution.

Cesium-134 was also detected in a Canadian salmon, according to the Fukushima InFORM project, led by University of Victoria chemical oceanographer Jay Cullen.

Both statements are factual. Cesium’s presence on the Oregon Coast in November 2016 was a first, although an anticipated one. The presence of cesium-134 in salmon, as well, was a first. That announcement came from a University of Victoria initiative called InFORM, who issued a press release about the find on 15 November 2016:

For the first time, the Fukushima fingerprint isotope, cesium-134 (134Cs; half-life ~ 2 years), has been detected at an extremely low level in a Canadian salmon by the InFORM project. The single sockeye salmon that tested positive was sampled from Osoyoos Lake in the summer of 2015, according to scientists from the Radiation Protection Bureau at Health Canada, in cooperation with Fisheries and Oceans Canada and local First Nations. [...]

The results of this extended analysis show that trace (0.07 Bq kg-1) levels of 134Cs were detected in one sample from Okanagan/Columbia River population. No 134Cs was detectable in the other samples. The observed levels remain well below the action level (1000 Bq kg-1) set by Health Canada guidelines.

Of note are both the low levels detected and the fact that the report concerns, again, one single fish collected in 2015 (making any image of multiple salmon, employed by viral posts purporting to cover this news, wholly irrelevant to the story). To put 0.07 Bq kg-1 into proper context, the World Health Organization's limit for acceptable radiation adopted by most governments from radioisotopes in food is 1000.00 Bg kg-1.

Further context can be provided by comparing the radioactivity of Fukushima-contaminated fish to the naturally occurring radioactivity of fish. A study published in March 2015 did just that. Reporting their values (in millisieverts per year) based on an assumed annual diet, these researchers found that the radioisotope exposure attributable to Fukushima in both Japanese fish and Pacific Northwest fish was equal to or less than the amount expected by radioisotopes that occur naturally in fish:

The total effective dose commitment from ingestion of radionuclides in fish, shellfish and seaweed caught in coastal waters off Fukushima was estimated to be 0.6 ± 0.4mSv/y. The individual effective dose commitment from consumption of radioactive-contaminated fish caught in the open Pacific Ocean was estimated to be 0.07 ± 0.05mSv/y. These doses are comparable or much lower than doses delivered from the consumption of natural 210Po in fish and in shellfish (0.7mSv/y). The estimated individual doses have been below the levels when any health damage of the Japanese and world population could be expected.

Polonium-210 (210Po) is a highly radioactive decay product of lead-210, regularly formed in the atmosphere through the modification of radon gas, which Earth naturally and continually emits. The radioactive lead-210 rains down over earth, with a fraction decaying into polonium-210 in living organisms, as described in a 1965 paper in Nature:

Radon-222 is released continuously by the land surfaces of the Earth, and a reservoir of this gas is thereby maintained in the atmosphere. Radioactive decay of atmospheric radon-222 and its short-lived daughters results in the formation of lead-210, which eventually returns to the Earth's surface.

In other words, the cesium-134 in this single salmon almost certainly came from the Fukushima disaster, but eating it would be no more or less dangerous than consuming any fish on Earth. Not to be derailed by these observations, OrganicAndHealthy.org merely dismissed them by (in a sense) dismissing objective reality itself:

Of course, we know better – there’s no such thing as safe amount of radiation for living organisms.

This statement ignores the fact that, like it or not, humans are exposed to radiation naturally every moment of every day. According to a review of marine effects of the Fukushima disaster published on 30 June 2016:

The added dose from the [Fukushima Daiichi nuclear power plants] should be discussed relative to the global average dose from natural background radiation, which is approximately 2.4 mSv y−1 [...] This can be apportioned into 1.2 mSv y−1 from inhaled radionuclides (primarily radon gas), 0.29 mSv y−1 from ingested radioactivity, 0.39 mSv y−1 from cosmic radiation, and 0.48 mSv y−1 from radiation arising from the surrounding geology.

Globally, natural background varies, primarily because of elevation, latitude, and the underlying geology. Exposures worldwide from natural sources are estimated to fall within the range of 1–13 mSv y−1, although there are exceptions. High natural background radiation can exceed 50 mSv y−1 in locations such as Ramsar, Iran; Guarapari, Brazil; Kerala, India; and Yangjiang, China.

To be sure, the Fukushima disaster was a worldwide environmental catastrophe with global effects. The presence of a single North American salmon with trace levels of cesium-134, undoubtedly the result of the Fukushima event, will nevertheless have a barely negligible — let alone catastrophic — effect on public health.

fao.org.   "Codex Guideline for Radionuclides in Foods Contaminated Following a Nuclear or Radiological Emergency."     2 May 2011.

Povinec, Pavel, P., and Hirose, Katsumi.   "Fukushima Radionuclides in the Nw Pacific, and Assessment of Doses for Japanese and World Population from Ingestion of Seafood."     Scientific Reports.   12 March 2015.