A photograph showing a black police officer protecting participants in a white supremacist protest was widely circulated after violent events in Charlottesville, Virginia. 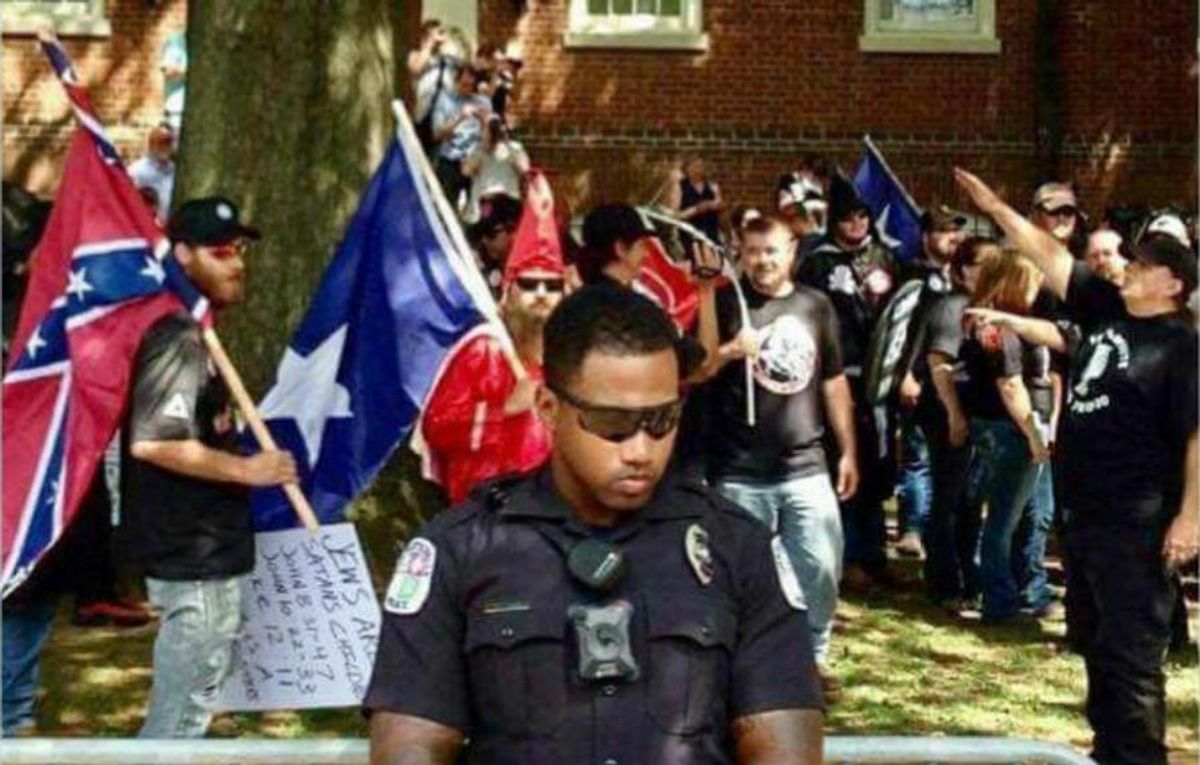 Although this photograph was genuine, it was not — as was widely assumed (or stated) in social media posts — a picture snapped at the 12 August 2017 white nationalist rally in Charlottesville. The image had been posted online well over a month earlier, as shown in this 9 July 2017 tweet from Tucson, Arizona, police chief Chris Magnus:

Photo says it all. Police around nation called upon w/regularity to protect 1st Amend rights no matter how heinous they may find the speech. pic.twitter.com/3keTS7bdX2

It was also posted on Facebook at that time by Kimberly Payne Hawk, who described the pictured policeman as "Charlottesville Police Officer Nash":

But there were also a number of really nasty comments.

And Kimberly later posted this in response:

"On Monday I saw a photo from the KKK rally that moved me and I posted it. Now it has gone viral and mean, angry people are coming out of the woodwork.

I do not care about the rude comments towards me but I am becoming quite irritated at the attacks on our local police officer.

He is getting attacked for being an African American police officer who was protecting the free speech rights of the klan and I am getting accused of being a supporter of racism because my sister is a police officer.

It must be a horrible way to live to be so defensive and angry all the time.

I hope these people can find some happiness and peace at some point in their lives."

I'm dumbfounded that anyone could criticize this officer and what he's doing.

Thank you Officer Nash for your service.

And thank you Kimberly Payne Hawk for posting this.

The image originated with a Ku Klux Klan rally held in downtown Charlottesville on 8 July 2017:

The photograph was snapped by during that protest by Jill Mumie, one of several shots she captured on her iPhone:

That afternoon, she positioned herself near an area that had been cordoned off “in anticipation of what might unfold.” She purposefully stayed in front of the officer, waiting for what she felt was the right moment that captured the “bizarre” scene that was unfolding.

Once the Loyal White Knights of the Ku Klux Klan arrived, she recalled “a huge surge of people behind me.” And so with her iPhone, Mumie tried a few different shots. In one outtake, a girl stands beside the officer, snapping a picture of the commotion as the officer stares elsewhere. The angle of his chin, the tilt of his head, something felt off. In another outtake, the attention is focused on a man behind the officer who displays a middle finger in Mumie’s direction.

The officer pictured in the image was a Charlottesville High School school resource officer named Darius Nash, who said, "I don't feel like I'm a hero for it. I swore to protect my city and that's what I was there to do. I don't think it makes me a hero, just doing what I believe in.”