Was a Priest Pushed off Stage for Saying 'Fat Women Cannot Go to Heaven?'

This incident reportedly occurred during the closing mass of a youth retreat in Brazil. 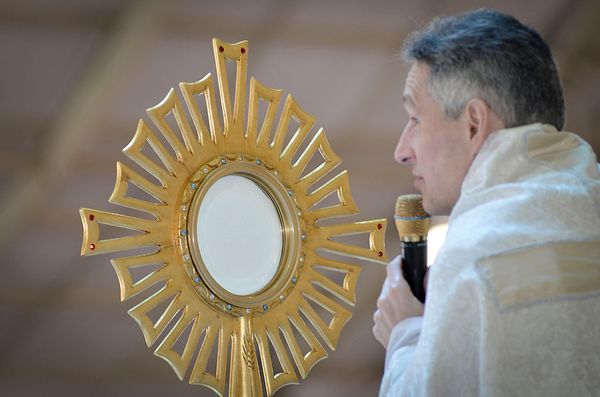 Claim:
A video shows a woman pushing a priest off a stage after he said, "Fat women cannot go to heaven."
Rating:

On July 17, 2019, Twitter user "Figen" posted a video of a woman pushing a priest off of a stage and claimed that the incident had occurred shortly after the priest said, "Fat women cannot go to heaven":

This is a genuine video of a woman shoving a priest off of a stage. However, the quote accompanying the footage in this viral tweet is a fabrication.

This incident occurred during the closing mass of a youth retreat in Cachoeira Paulista, Brazil, on July 14, 2019, and shows Padre Marcelo Rossi being pushed off a stage while addressing an estimated crowd of 50,000 people. While Rossi's message was suspiciously cut from the viral video shown above, a portion of his sermon can be glimpsed in a video of the incident published by Portal UAI.

Marco Faustino, a reporter with E-Farsas.com, provided the following translation of Rossi's speech just before he was pushed from the stage: "(...) These hands no longer belong to me. Sinners, weak, but these hands belong to Jesus, so much that the priest already acts in the person of Christ. To serve, to bless..."

The reason why this woman pushed Rossi off the stage is unknown. The 32-year-old woman was taken to the police station after the incident. She reportedly attended the service with a group from Rio de Janeiro, and her companions told police that she suffered from some mental-health issues.

The Portuguese-language outlet O Dia reported that the woman said the incident was "between him and me" as she left the station.

Rossi was relatively unharmed in the incident and has not pressed charges, as of this writing. In a video posted shortly after the incident, he said: "Rest assured. It's all right. Just a few little pains. It's normal, there is no problem. Did not break anything. Amen."