Is This an 1800s-Era Drug Store with a Marijuana Leaf Sign?

The production of hemp was once encouraged by the United States government. 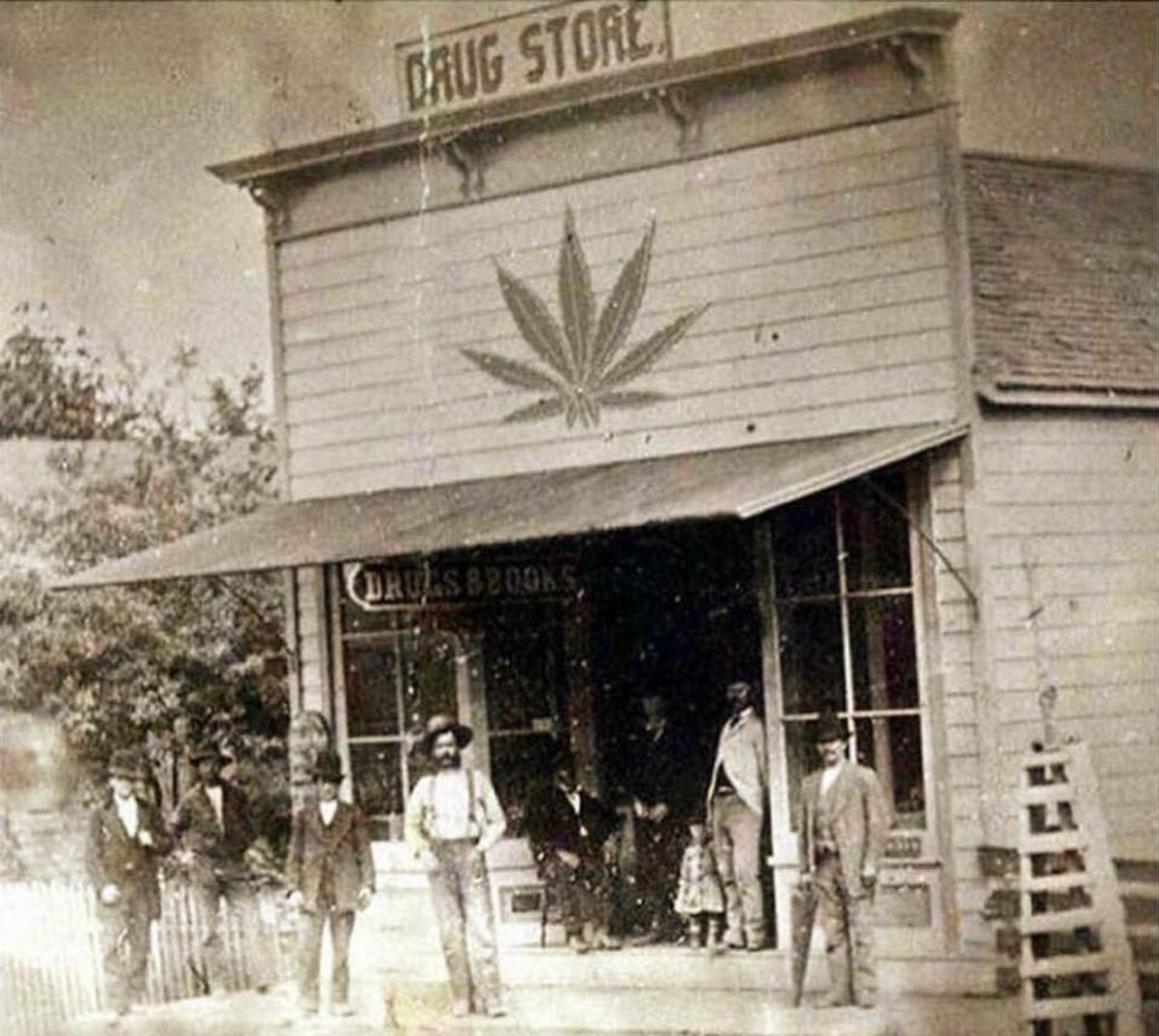 Claim:
A photograph shows a marijuana leaf sign above a drug store in the 1800s.
Rating:

A photograph supposedly showing a group of men standing outside of a drug store adorned with a giant marijuana leaf sign sometime in the 1800s is frequently shared by "historical picture" social media accounts: This is not a genuine photograph of a drug store in the 1800s. The marijuana leaf above the awning was digitally inserted into this image.

The picture was created by graphic designer Emmanuel Laflamme circa 2009. It is available via his Deviant Art page, where he describes the art as a "mash-up" and a piece of "digital art" created with Adobe Photoshop. The image is also available on the Mashups page of LaFlamme's website, a page dedicated to digital artworks that combine multiple images.

But what the image shows isn't entirely far-fetched. In the 1600s, King James I required property owners in the settlement of Jamestown in the Colonial Era to grow hemp plants for export. The crop continued to flourish for the next few centuries, and by the late 1800s, marijuana was a common ingredient in medicinal products sold in pharmacies, according to PBS:

The United States's relationship with marijuana dates back to the Colonial Era. American production of hemp (the cannabis plant) was encouraged by the government in the 17th century for the production of rope, sails, and clothing. Domestic production of hemp flourished until after the Civil War, when imports replaced hemp. In the late 19th Century, marijuana became a popular ingredient in many medicinal products and was sold openly in pharmacies.

Not until the 1930s did the U.S. government start to regulate the drug.

The federal government first regulated marijuana in 1937, when Congress passed the Marijuana Tax Act. As with the Harrison Narcotic Act in 1914, Congress deemed an act taxing and regulating drugs, rather than prohibiting them, less susceptible to legal challenge. As a result, the 1937 legislation was ostensibly a revenue measure. Just as the Harrison Act used taxation and regulation to, in effect, prohibit morphine, heroin and other drugs, the Marijuana Tax Act essentially outlawed the possession or sale of marijuana. More stringent measures followed. In 1952, the Boggs Act provided stiff mandatory sentences for offenses involving a variety of drugs, including marijuana.

So while the marijuana leaf in the above-displayed image is the work of a digital artist, the idea that a drug store in the 1800s would sell marijuana products isn't that outlandish.