Flyers allegedly posted around Portland urged protesters to "rage" no matter what the Chauvin verdict proved to be. 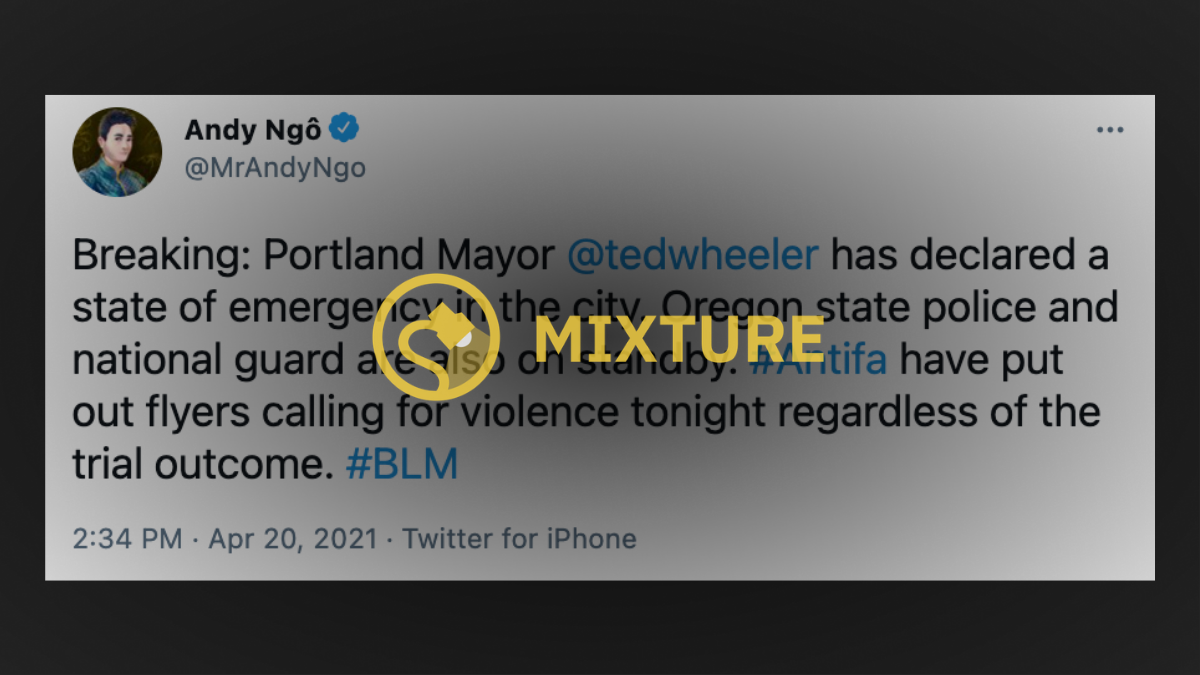 Claim:
Portland, Oregon, Mayor Ted Wheeler declared a state of emergency in the city after antifa and/or the Black Lives Matter movement put out flyers calling for violence regardless of the outcome of the Derek Chauvin trial.
Rating:

Wheeler did declare a state of emergency in advance of the Chauvin verdict and, in doing so, acknowledged the presence of "anarchist posters" in the city.

It is not clear whether an image of a flyer shared on social media and allegedly posted around Portland was authentic, or whether it was one of the ones Wheeler referred to as "anarchist posters." It is also unclear who created the flyer, though it appeared to share certain features in common with flyers previously posted around Portland that promoted so-called "direct action" marches which led to incidents of violence.

On the eve of former Minneapolis police officer Derek Chauvin's conviction on murder and manslaughter charges in the killing of George Floyd, a Black man whose death sparked a global reckoning over racism, cities around the U.S. braced for the potential fallout of the trial outcome.

On April 19, 2021, one day before the verdict was reached, Mayor Ted Wheeler of Portland, Oregon -- which had been a hotbed of racial justice protests for over a year -- declared a state of emergency. The declaration was widely reported by national news outlets as the world awaited the verdict reading in the Chauvin trial. In a 45-minute news conference, Wheeler was joined by other city leaders to respond to violence that had already erupted in Portland in anticipation of the verdict. Wheeler called the event a “high-intensity moment” and said that the city needed to be “ready as possible for anything.”

“As the mayor, I’ve declared a state of emergency to allow city bureaus to facilitate peaceful first amendment activity and respond to any violence if necessary,” said Wheeler, adding that the state of emergency would be activated for 24 hours and could be extended if necessary. In response, Oregon Governor Kate Brown had made available the state police and “select members of the national guard” should the city need the resources.

The mayor also acknowledged a “coordinated plan” to combat “anarchist posters” and “a group of 100 or so largely white, self-described anarchists who engage in the criminal destruction” of Portland’s “economy and confidence.”

“Let’s be clear, anarchist flyers call for what they describe as quote ‘direct action’ which are code words for breaking windows, ransacking businesses, arson and intimidation. They call for attacks on public employees,” said Wheeler. “They use crime and violence to intimidate those who don’t share their political views. These people are not protestors. They are criminals.”

A tweet shared by conservative journalist Andy Ngo (archived here) appeared accurately described Wheeler’s emergency declaration but claimed that Antifa had put out flyers “calling for violence… regardless of the trial outcome.” Ngo is also the editor-at-large of The Post Millennial, a Canadian conservative news website, that has been accused of “pamphleteering.” (Ngo did not respond to our request for comment.) A tweet that was shared on the afternoon of April 20, 2021 (archived here) furthered Ngo's sentiment, implying that the state of emergency was in part due to antifa and the Black Lives Matter (BLM) movement, who were both supposedly behind the poster that told “rioters to ‘rage’ in Portland ‘no matter what the verdict is.’” As of this writing, Snopes has not been able to determine if the flyer in question was actually posted around Portland. Furthermore, the text did not specifically mention antifa or BLM, though it did imply that Don’t Shoot Portland, a social justice nonprofit, was supporting the protest. In an email to Snopes, the organization said that they were not involved with the posters in any capacity.

“Unfortunately, it is not uncommon for people to use our name for their own agendas. Our marches center [on] children and nonviolence,” a spokesperson told Snopes.

A reverse image search did not return any results, and Snopes contacted both BLM and Wheeler's office but did not receive a response in time for publication.

While it is true that Wheeler issued a state of emergency in advance of the Chauvin verdict and mentioned "anarchist posters," there is not enough evidence to confirm whether Wheeler was speaking of the flyer above, or what group(s) were behind this flyer, if it was real. We will update this article if and when more information becomes available.

Update [April 21, 2021]: This article was updated to include statements from Don’t Shoot Portland.