A sacrilegious hoax was making its way around the internet. 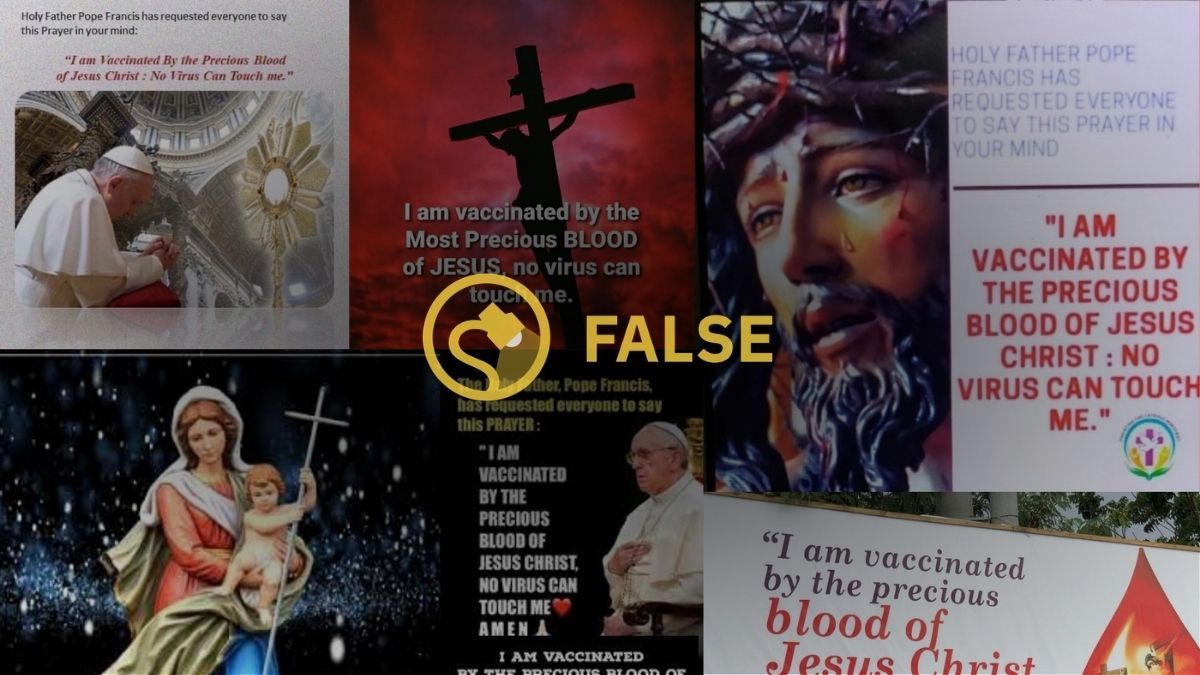 Claim:
Pope Francis urged people to say the following prayer: "I am vaccinated by the precious blood of Jesus Christ. No virus can touch me. Amen."
Rating:

Pope Francis received a vaccination for COVID-19 in January 2021. The Holy See has also encouraged his followers to get vaccinated, saying in one interview that it was the "moral choice" to get the vaccine "because it is about your life but also the lives of others." Despite the Pope's clear position on the vaccine, a fake quote from the pontiff has been widely spread among anti-vaxxers.

This sacrilegious hoax states that the Pope urged people to say the following prayer:

"I am vaccinated by the Most Precious BLOOD of JESUS, no virus can touch me. Amen."

This is not a genuine quote from Pope Francis.

This fake quote has been circulating since at least March 2020. The earliest iteration that we could find was posted to the Facebook page of the St. Jerome Emiliani Bible Study Group. That version included an English-language caption for a video of Pope Francis speaking in Spanish. The caption, however, did not accurately reflect what the pope said in this video. This was not simply a mistranslation. The caption — "Holy Father Pope Francis has requested everyone to say this Prayer in your mind: I am Vaccinated By the Precious Blood of Jesus Christ: No Virus Can Touch me." — in no way reflects the contents of the video: Pope Francis did not tell members of the Roman Catholic Church that "no virus can touch them" if they prayed to be vaccinated by the blood of Jesus Christ. This video, which is several years old and has nothing to do with the pandemic, was originally posted in March 2017. Imagen Radio transcribed the video, which we translated via Google.

Here's what the Pope actually says in this video:

I send you an affectionate greeting, a very big affection. I congratulate you for everything you do, for looking at life with beautiful eyes because life is beautiful, but you have to know how to look at it beautifully. I pray for you, but I ask that you pray for me.

While there's no record of Pope Francis ever telling his followers that "no virus can touch them" if they pray to be vaccinated by the blood of Christ, and while the Holy See has been vaccinated himself and has urged his followers to do the same, this fake prayer has been repeated ad nauseum across social media. The quote even appeared on a billboard in the Philippines: This fake "prayer" offers an opposing message to the Pope's genuine thoughts on the COVID-19 vaccine. The Pope has talked about the vaccine as a gift from God, not as something that should be avoided.

In March 2021, for example, he said that the "Lord has given us an effective vaccine against this unpleasant virus."

We know how easy it is to catch the virus of discouragement that sometimes seems to spread around us ... However, the Lord has given us an effective vaccine against that unpleasant virus. It is the hope born of preserving prayer and daily fidelity to our apostolates. With this vaccine, we can go out with renewed strength, to share the joy of the gospel as missionary disciples and living signs of the presence of God's kingdom of holiness, justice and peace.