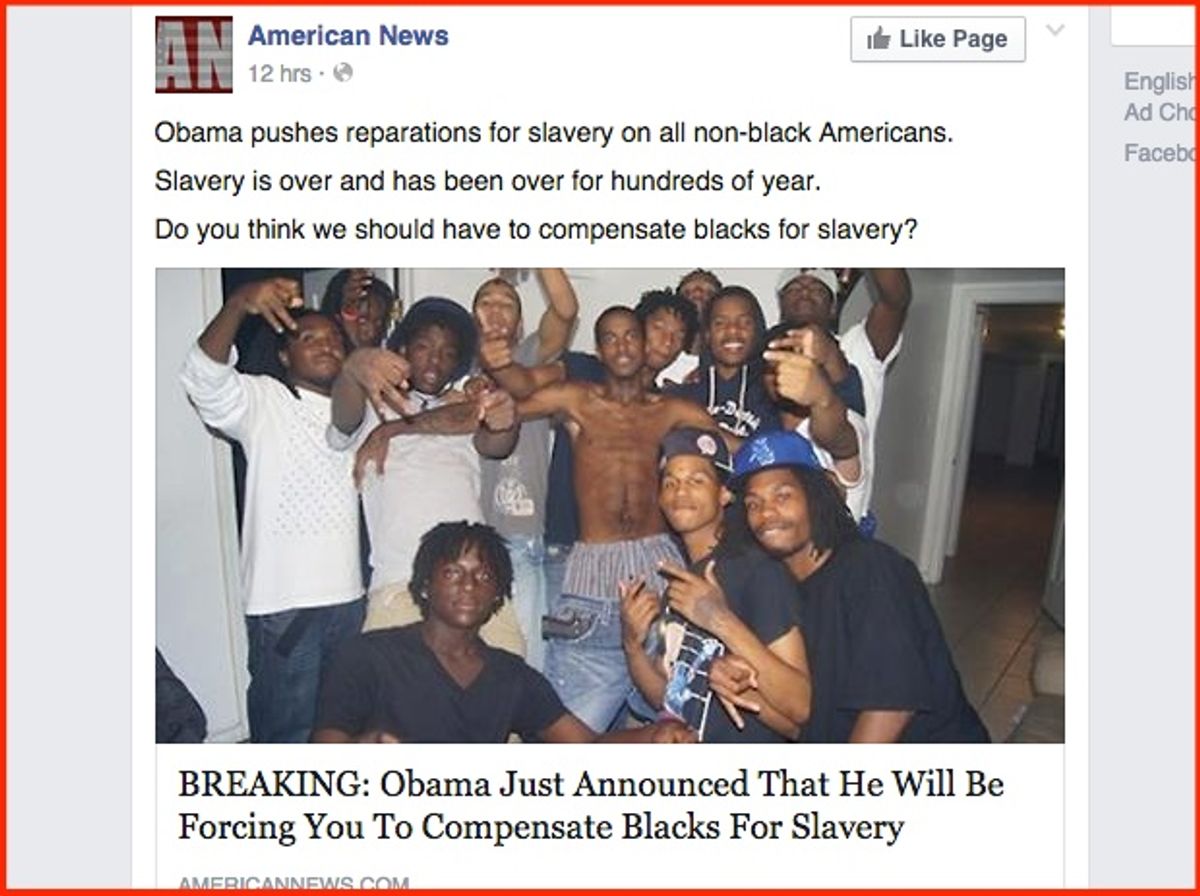 Claim:   President Obama has announced he will force Americans to pay slavery reparations beginning in 2016.

Origins:  On 2015, the Facebook page American News published a post titled "BREAKING: Obama Just Announced That He Will Be Forcing You to Compensate Blacks for Slavery" with an embedded link to an AmericanNews.com article with the same title. On 2015, the Tea Party Facebook page posted a link to an article from the Tea Party News Network (TPNN) titled "[VIDEO] Obama to Push for Reparations in 2016."

Both Facebook posts were published to Facebook during a race-based controversy in the United States over an altercation between teens, adults, and police at a pool party in McKinney, Texas. This timing was notable because the content featured in the articles dated back to approximately April 2015.

While the title of the American News article specifically stated that President Obama "just announced" he was "forcing" Americans to "compensate blacks for slavery," its opening paragraph completely contradicted its claims:

According to a recent report from Fox Business News, the White House is about to make a highly controversial move.

“The news is a glimpse of much bigger news that is going to come from the White House, next year, I’m leaning towards,” host Charles Payne told viewers of Making Money. “I think that there’s going to be an official apology from the White House to slavery in America and then a major push to get cash, and I’m talking lots of cash.”

From this tidbit — the opinion of a single television host on a Fox Business Network (FBN) show — was born the claim rendered by conservative web sites as "Obama Just Announced That He Will Be Forcing You to Compensate Blacks for Slavery." In fact, President Obama made no statements about seeking public payment of slavery reparations (mandatory or otherwise) in April, May, or June of 2015, contrary to the headlined assertion. Yet in their 2015 article, TPNN misleadingly reported that Obama would "push for" reparations in 2016, adding below the statement that it stemmed from a "prediction" made by Fox Business News host Charles Payne: In an outrageous move that is bound to create even more racial discord in America, Obama will push for reparations for slavery in 2016.

This prediction was made by Fox Business News host Charles Payne during Thursday’s episode of Making Money.  Obama fully supports the United Nations Declaration for the Rights of Indigenous People, so he will push for Americans to pay slave reparations as a way to satisfy the treaty.

American News and TPNN published posts about "slavery reparation" articles to their Facebook pages on 2015 and 2015, respectively; however, the underlying articles those posts linked to had been published on 2015 and 2015. No related events, statements, or developments occurred to prompt the republication of those articles, yet those republications coincidentally occurred during race-related debates prompted by the pool party incident in McKinney.

Both American News and TPNN cited "Thursday" as the sole frame of chronological reference for their claims. However, only the former was anywhere close to accurate: the "Thursday" referenced by TPNN appeared to be 2015, when a TPNN representative appeared as a guest on on Fox's Making Money:

Tea Party News Network director Scottie Nell Hughes, a frequent Making Money guest, agreed with her host: “Sure, slavery was a horrible thing that happened, but this is not going to help race relations in the United States today,” she said.

In short, one FBN host's unsupported speculation (and the agreement of a compliant guest) from back in April 2015 that President Obama would use a U.N. Declaration for the Rights of Indigenous People as a vehicle to "push for Americans to pay slave reparations" was repackaged two months later, in the midst of a national racial controversy, as the false claim that "Obama Just Announced That He Will Be Forcing You to Compensate Blacks for Slavery."