A short viral video clip was cut off before showing that Agata Kornhauser-Duda did indeed greet the United States president. 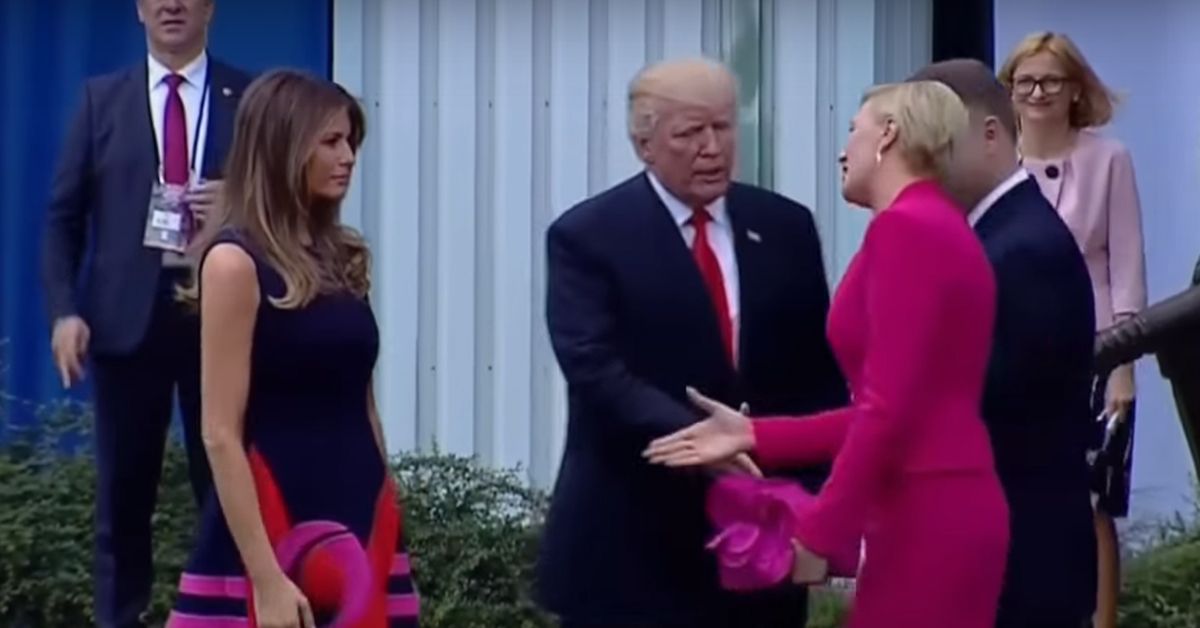 Several reports focused on a short clip in which the four exchanged greetings, with Kornhauser-Duda shaking Melania Trump's hand, while the U.S. president extended his own.

The incident took place during his Poland visit when the First Lady of Poland declined to shake hands with him and chose to greet the FLOTUS instead.

Many reports and social media posts used a short clip of the encounter:

However, extending the clip by just a couple of seconds gives an accurate picture of the full encounter, with Kornhauser-Duda shaking hands with Donald Trump immediately after greeting the U.S. First Lady.

So Kornhauser-Duda did shake Donald Trump's hand. She just shook Melania Trump's hand first. Further, she did not appear to even see Donald Trump's extended hand. As the two presidents shake hands, Kornhauser-Duda begins walking over to Melania Trump, appearing to maintain eye contact with her at all times, meaning she quite possibly didn't catch the President's attempted handshake in her peripheral vision.

Finally, there is a certain order or choreography to the greetings, which Kornhauser-Duda appears to have been following. First, the two heads of state shake hands, while the two first ladies do the same, then the First Lady of Poland shakes hands with the President of the United States, while the First Lady of the United States shakes hands with the President of Poland.

So even if Agata Kornhauser-Duda did see Donald Trump's outstretched hand at the last moment, the fact that the two did not shake hands right then does not necessarily mean she was "snubbing" or "refusing" or even "smoothly avoiding" Trump. Instead, she may simply have been following protocol.

Both Newsweek and Vanity Fair updated their articles after publication to reflect the fact that Donald Trump and Agata Kornhauser-Duda did actually shake hands.

This incident mirrors similar reporting from June 2017, when Trump hosted India's prime minister, Narendra Modi, at the White House. Newsweek reported at the time that Modi had "evaded" and "neatly sidestepped" a handshake from Trump by hugging him. In reality, Modi initiated a handshake with Trump, before warmly hugging him — a greeting for which the Prime Minister of India has become well known, and which he has bestowed on many world leaders in recent years.