Is This a Photo of Sand After Being Struck By Lightning?

It is a truly strange-looking formation. 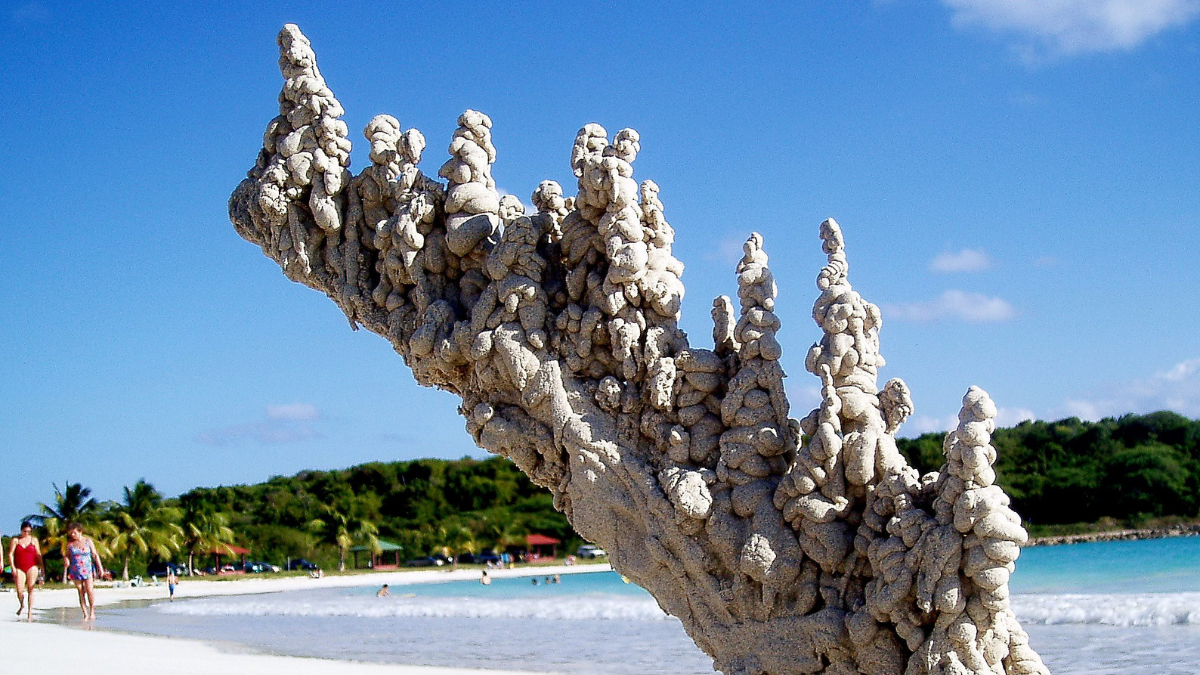 Claim:
A photograph shows a sand formation that was created by a lightning strike.
Rating:

In July 2022, a photograph supposedly showing a sand formation on a beach after it was struck by lightning was posted by the "Curiosity" Twitter account @sciencenature14. The photo was captioned: "When Lighting hits a sandy beach, it creates otherworldly glass sculptures known as fulgurites or "petrified lightning." As noted by @picpedant, the above-displayed photograph does not show fulgurites or petrified lightning. This is actually a sand sculpture created by Matthew Kaliner, or "Sand Castle Matt," a popular sand sculpture artist. Kaliner originally shared the picture to his Flickr account in 2007.

And the sculpture is actually part of a larger sculpture. Here's a photograph of Way's entire sand sculpture that was built on Red Beach in Puerto Rico. Kaliner's work has gone viral before. In 2014, the contemporary art website This is Colossal published an article about these unusual sculptures, writing:

No these aren’t the homes of mutant sea creatures or geographic oddities forged from centuries of tidal currents, they’re sandcastles built by a Massachusetts man who goes by Sandcastlematt. Using found objects like vines, plywood, and other junk he creates a sturdy framework to which he applies the classic drip method sandcastle technique resulting in these strange temporary structures that look like contemporary land art pieces.

According to Scientific American, people have been claiming that Kaliner's sand sculpture actually shows “what happens when lightning strikes sand" since at least 2013. While the above-displayed pictures were created by an artist, not lightning, "fulgurites" and "petrified lighting" really do exist.

Incredibly, lightning can and does in fact create something amazing when it hits sand, but the conditions have to be perfect. When it hits a sandy beach high in silica or quartz and the temperature goes beyond 1800 degrees Celsius, the lighting can fuse the sand into silica glass. The blast of a billion Joules radiates through the ground making fulgurite–hollow, glass-lined tubes with a sandy outside. Petrified lightning.

Here's a photograph of some petrified lightning that was taken by the National Parks Service: At Great Sand Dunes National Park & Preserve, the explosive power of lightning is captured in blackish tubes of glass called fulgurites. At 50,000 degrees F—hotter than the surface of the sun!—lightning blasts the sand, vaporizing the area where the bolt of electricity shoots through the sand and melting the surrounding sand into dark glass.

“Fulgur” is the Latin word for lightning. Cicero, a philosopher of the Roman Empire era, used the expression “condere fulmina,” meaning “to dig up thunderbolts”—indicating early Romans had knowledge of fulgurite formation in sandy areas of Italy.