Did a Phone Service Outage Enable COVID-19 Tracking Apps To Be Placed in Phones? 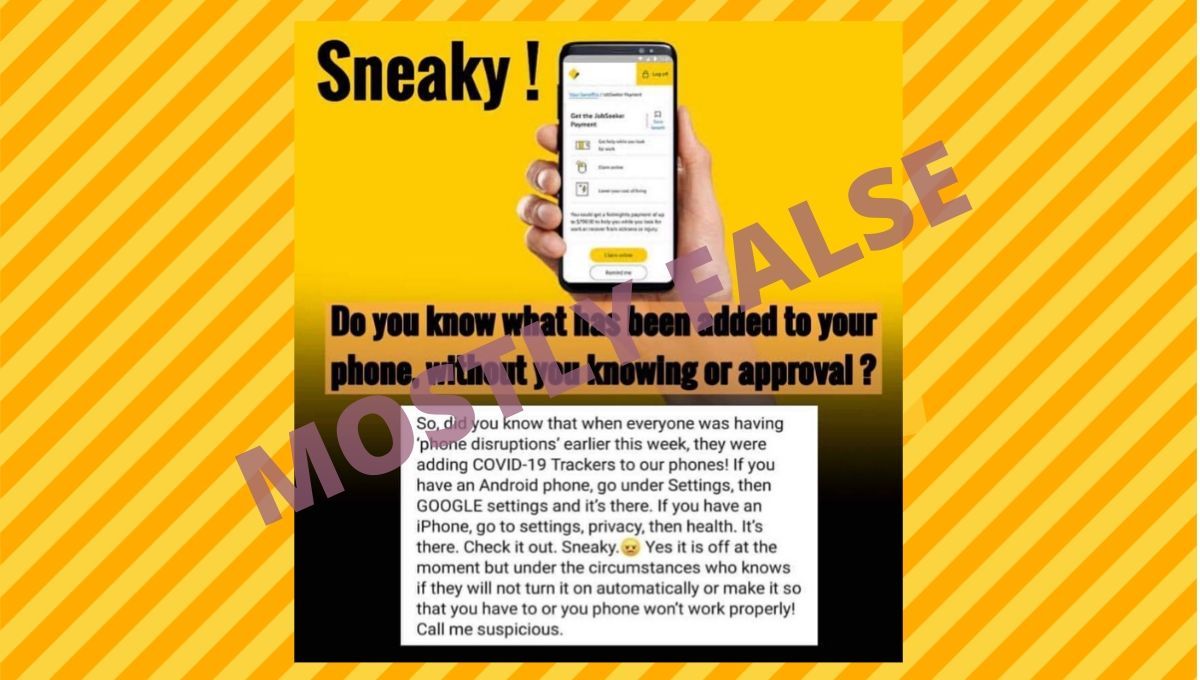 In May 2020, Apple and Google launched a COVID-19 exposure notifications technology, which allows users to choose whether they want to use COVID-19 tracing apps on their phones. On June 15, 2020, many T-Mobile customers experienced network outages.

However, the phone outage (which was mostly limited to one network) and the availability of COVID-19 tracking technology occurred at different times. Furthermore, Google and Apple's exposure notification technology is not functional without the user's consent.

Privacy advocates are still weighing the pros and cons of proximity-tracing apps that use Google and Apple's technology.

A phone network outage coinciding with the coronavirus pandemic in the summer of 2020 became fertile ground for rumors in mid-June, when some cellphone users in the U.S. claimed they couldn’t send or receive calls and text messages. Soon after, Facebook posts claimed that the network outage enabled a suspiciously timed "COVID-19 Tracker" to be added to Apple and Android phones.

Snopes readers sent us numerous posts with variations on the above rumor, but the reality was far less dramatic. We learned that the June network outage primarily occurred with T-Mobile customers, and the COVID-19 exposure notifications technology in iPhones and Androids had been rolled out much earlier. Also, that tracker technology cannot be activated unless users choose to turn it on.

Here's what we know: On June 15, 2020, T-Mobile and its subsidiary Sprint, along with some Verizon and AT&T users, reported service outages. AT&T and Verizon reported their networks were operating normally — Verizon, for instance, said the problems stemmed from "another carrier's" network issues, which meant that their users' calls to and from T-Mobile accounts were failing. Meanwhile, T-Mobile announced a circuit failure on its end was the root cause for the outage.

The rumor in the meme displayed below began circulating a few days later connecting the outage to the COVID tracking: But the new tracker feature already appeared to be available, though not entirely functional, in cellphones, weeks before the outage. An Android user, for instance, shared a screenshot of what appeared to be an added feature in Google settings on May 12, presumably an early version of these so-called "trackers": A verified Google employee responded to the query on the same forum:

The exposure notifications is an application programming interface (API), not a phone application, that offers app developers a number of standardized operations they can use. Developers working for public health agencies around the world issue applications using this API created by Apple and Google. The Google employee emphasized that if the user opted not to download any application that used that notification, then the notification would not be turned on and would not be able to collect any data.

If Android users click on the COVID-19 notifications feature, which is available through Google settings, they have to both install a participating app from their region to activate the exposure notifications and enable Bluetooth to use the feature.

On May 20,  Google and Apple announced the official rollout of the exposure notification API, which uses Bluetooth technology to help governments reduce the spread of COVID-19. Apple and Google barred authorities from using their technology to collect GPS data or require users to enter personal data. The companies are relying on encrypted Bluetooth metadata to identify person-to-person transmission of the disease. Snopes covered how Bluetooth technology traced COVID-19 transmissions here.

We reached out to both Apple and Google about the rumor.

A representative for Apple did not address our question about the alleged link between the outage and tracker but instead provided a general statement regarding privacy. In that statement, the rep confirmed to Snopes that users must explicitly choose to turn on the exposure notifications system for it to work, and it does not collect or use their device location. Identities are also protected from Google, Apple, and other users. Users can choose to report a positive COVID-19 diagnosis, and any data collected is only for COVID-19 response efforts. Details about how Google and Apple say they will protect privacy can be found here and here.

A Google representative, however, did confirm "no connection" exists between the June 15 mobile phone network outage and the exposure notifications roll-out.

We should note that privacy advocates from the Electronic Frontier Foundation (EFF) are wary of Google and Apple’s approach to tracking COVID-19 transmission, and have highlighted a number of security risks, while acknowledging that "Bluetooth proximity is the most promising approach so far to automated COVID tracking."

In sum, because only one major telecommunications network faced widespread disruptions in June, while the exposure notifications application was rolled out in May, the timing makes the overarching claim that the rollout and the outage are related impossible. In addition, cellphone users must themselves download an app, meaning it can't be sneakily added on phones. That said, although Google and Apple have said they have put many privacy safeguards in place, critics still question whether those safeguards are adequate. Given all of the above, we rate this claim as “Mostly False.”

Etherington, Darrell.   "Have Apple And Google Suddenly Uploaded A COVID-19 Tracking App To Your Phone? The Facts Behind The Furor."    Techcrunch.   20 May 2020.

Reuters.   "Fact check: Apple’s iOS 13.5 Update Does Not Automatically Activate Contact Tracing or Allow the Government to “Track” Users."    26 May 2020.

Support.google.com.   "Use the COVID-19 Exposure Notifications System on Your Android Phone."