Did Pete Buttigieg Stage a Bike Ride After Riding in SUV?

The transportation secretary has been described as a “bike enthusiast.” 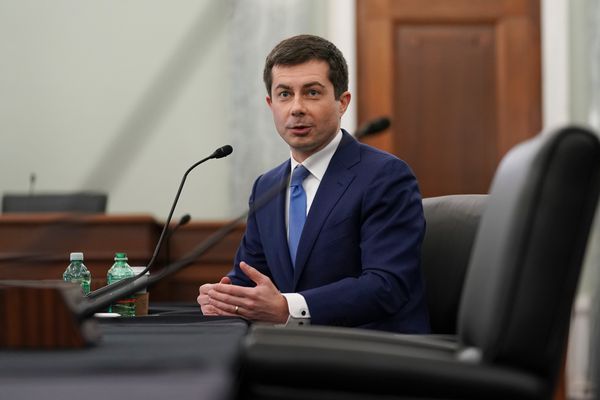 On April 1, 2021, a video showing U.S. Transportation Secretary Pete Buttigieg unloading a bike from an SUV was shared on social media. Conservative commentator Dinesh D'Souza published: "Buttigieg CAUGHT Faking Green Lifestyle, Rides Bike to Work After Car Drops Him Off Near Destination." A headline on The Post Millennial read: "WATCH: 'Environmentalist' Buttigieg unloads bike from SUV before riding the short distance to his destination."

A number of YouTube users including conservative commentator Charlie Kirk also shared the video in question.

Twitter user @Xeriland tweeted that it was "Pete Buttigieg's dog and pony show." He claimed: "Use an armored Suburban to bring a bike within a short distance of the destination. Unload it and ride in with a security detail in tow, pretending to save energy."

Despite being false, the tweet was shared by tens of thousands of accounts and viewed millions of times.

These headlines, YouTube video titles, and tweets were all misleading and false. Buttigieg was not caught on camera staging a bike ride.

We contacted the U.S. Department of Transportation. A spokesperson told us: "He rode his bike to the White House Cabinet meeting and he rode his bike back to DOT after the meeting."

According to Google Maps, the 6-mile round trip might take around 40 minutes on a bicycle.

The video in question was first posted by CNN journalist DJ Judd, who made no mention of Buttigieg staging the bike ride:

The video showed Buttigieg mounting the bicycle and eventually riding away with the SUV following him. Katie Barlow from SCOTUSblog replied to DJ Judd's tweet, writing: "And biked out of the complex."

The @Breaking911 Twitter account falsely tweeted that the video showed his arrival. This was misleading in that it implied Buttigieg arrived to the White House in the SUV and then "wobbled" a short distance to the Cabinet meeting: As for why the SUV was there, Buttigieg has a security detail. The bicycle appeared to have been stored on the SUV's bike rack while he was inside the White House for a Cabinet meeting.

DJ Judd's video was subsequently shared on Buttigieg's own Twitter account, an odd choice if he had been "caught" doing something in a bad light.

Buttigieg previously appeared in a video with the League of American Bicyclists. Bicycle Retailer and Industry News reported on the conversation, saying that he is a "bike enthusiast":

Pete Buttigieg was born in "car country," so the Indiana native would seem to have the perfect background to be U.S. Transportation secretary. But as he made abundantly clear Wednesday addressing the annual League of American Bicyclists National Bike Summit, he's been born again as a bike enthusiast.

"I come from an auto-making part of the country, and we're proud of it," said Buttigieg, who made a short opening statement during the virtual event before taking questions from League Director Bill Nesper. "But we can definitely be more of a bicycling country."

In sum, no, Buttigieg was not caught staging a bike ride after riding in an SUV. Countless headlines, YouTube video titles, and tweets were misleading and false.