Is Peanut Butter and Jelly Banned in Portland Schools Over Racism? 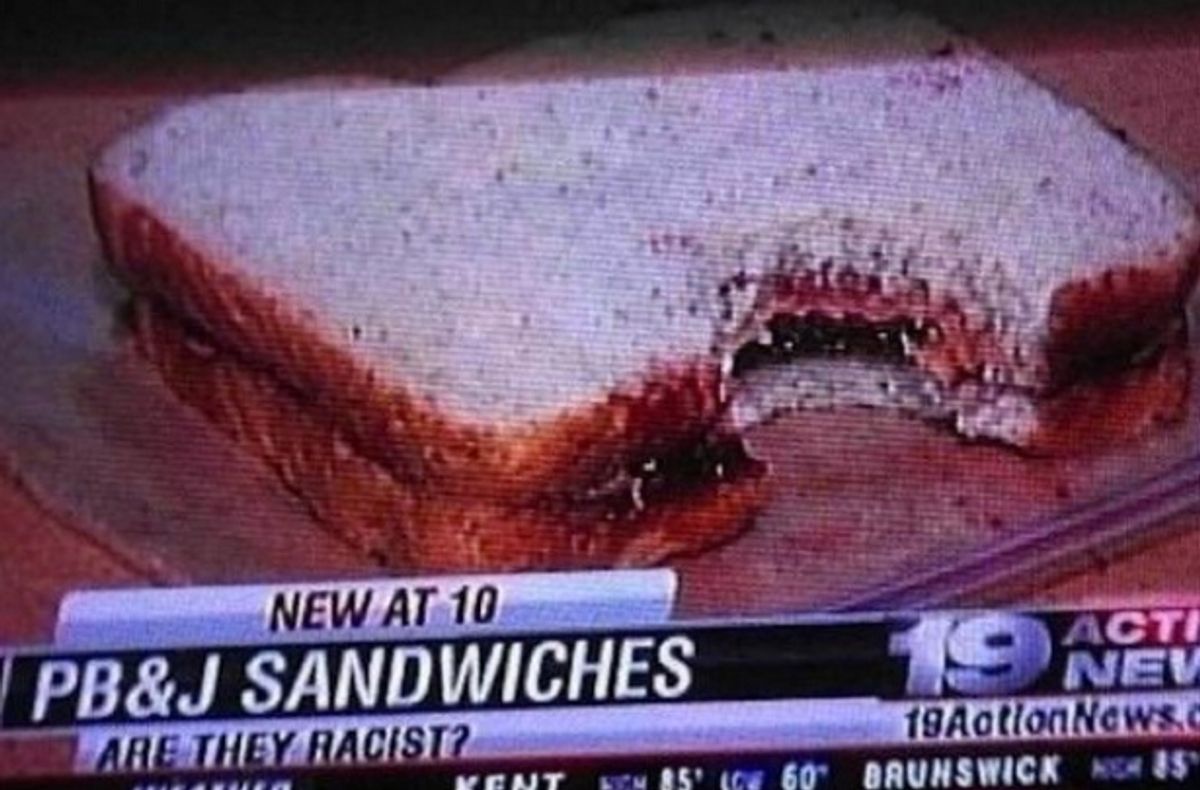 Amid a then-current national debate over the Confederate flag (and its historical significance) the web sites Conservative Post (CP) and Joe for America published articles, both titled "Peanut Butter and Jelly Deemed Racist." (The former was published on 24 June 2015, the latter on 25 June 2015.)

I have been seeing Facebook posts about a Portland school that is banning peanut butter and jelly sandwiches because they are racist. Can you shed some light on this sandwich dilemma?

In the context of a debate regarding the reclassification of common items as potentially racially offensive, the notion that something as harmless and American as peanut butter and jelly sandwiches could be next had a ring of truth to some unsettled Americans. But extraordinary claims such as this require extraordinary substance to be considered credible, and this one had some glaring weaknesses.


Oh the times we live in where food can be deemed racist. In a move Oprah would be proud of, Principal Verenice Gutierrez, of the Harvey Scott K-8 School in Portland, has labeled peanut butter and jelly sandwiches as racist.

It’s bread. It can’t use racial slurs, it can’t discriminate and it’s crucial in making a PB&J. I guess I have to go to the store and pick up some wheat bread now to promote loaf diversity in my kitchen.

The sole source for CP's claim was a piece published on a site called Mr. Conservative, which was itself sourced from an article published in 2013. In fact, it wasn't sourced so much as taken verbatim, as all three articles opened with identical admonishments that Oprah (long since retired from her network platform) would be "proud" of the purported ban of PB&J.

As it turns out, the original source for the "peanut butter sandwich ban" was a Portland Tribune article published on 6 September 2012. The entire rumor was predicated on the opening lines of that lengthy article, in which Portland elementary school principal Verenice Gutierrez referenced the notion that students from different cultures don't necessarily share the same frames of reference (even in matters that might seem universally common and ordinary, such as sandwiches), and educators should be aware of those kinds of issues:


Verenice Gutierrez picks up on the subtle language of racism every day.

"What about Somali or Hispanic students, who might not eat sandwiches?" says Gutierrez, principal at Harvey Scott K-8 School, a diverse school of 500 students in Northeast Portland’s Cully neighborhood.

"Another way would be to say: ‘Americans eat peanut butter and jelly, do you have anything like that?’ Let them tell you. Maybe they eat torta. Or pita."

Unfortunately, since the article's author (not Principal Gutierrez) used the word "racism" in the article's opening line, this brief opening passage was taken out of context and spun into a claim that Portland schools were seeking to "ban" peanut butter and jelly sandwiches for being "racist."

The claim really gained traction through an <a "href="https://www.donotlink.com/fp5r" target=bb>article published to the web site Breitbart on 16 September 2012. That article made the incredible leap of logic that since many Portland school leaders had taken part in a "week-long seminar on race" conducted by the Pacific Educational Group (PEG), at a total cost of $526,901, "Portland Schools Spent $500K to Deem PB&J Sandwiches Racist" — even though there was no tangible connection between the PEG training and Principal Gutierrez's remark to the Portland Tribune about peanut butter and jelly sandwiches, nor had Gutierrez (or anyone else in the Portland school system) actually referred to such sandwiches as "racist."

Breitbart's version stripped away the context of the original Portland Tribune article and transmuted it into a sweeping, hyperbolic declaration that peanut butter and jelly sandwiches were about to be classified as a "hate food":


In addition to teaching that peanut butter and jelly sandwiches are racist, PEG trains educators to view “rugged individualism,” “adherence to rigid time schedules,” and the belief that “hard work is the key to success” as traits of the dominant white culture.

We wonder how taxpayers will react when they discover Portland officials are wasting precious time and money to promote an ideology that may soon classify peanut butter and jelly sandwiches as a “hate food.”

As noted, the Portland Tribune reporter who penned the original article (not Gutierrez) was responsible for the turn of phrase "the subtle language of racism." Gutierrez's quoted remarks simply observed that children of different cultures might not eat peanut butter and jelly sandwiches commonly, at home, and therefore might be more accustomed to different foods. Not only was this brief remark made nearly three years prior to its circulation in 2015, but it was broadly misconstrued as "Portland schools ban peanut butter and jelly sandwiches for being racist" even though the remark in question in no way hinted at such a course of action.