Did Trump Adviser Paula White Pray for All 'Satanic Pregnancies' to Be Terminated?

The controversial televangelist engendered criticism and controversy for remarks she made during a church service in January 2020. 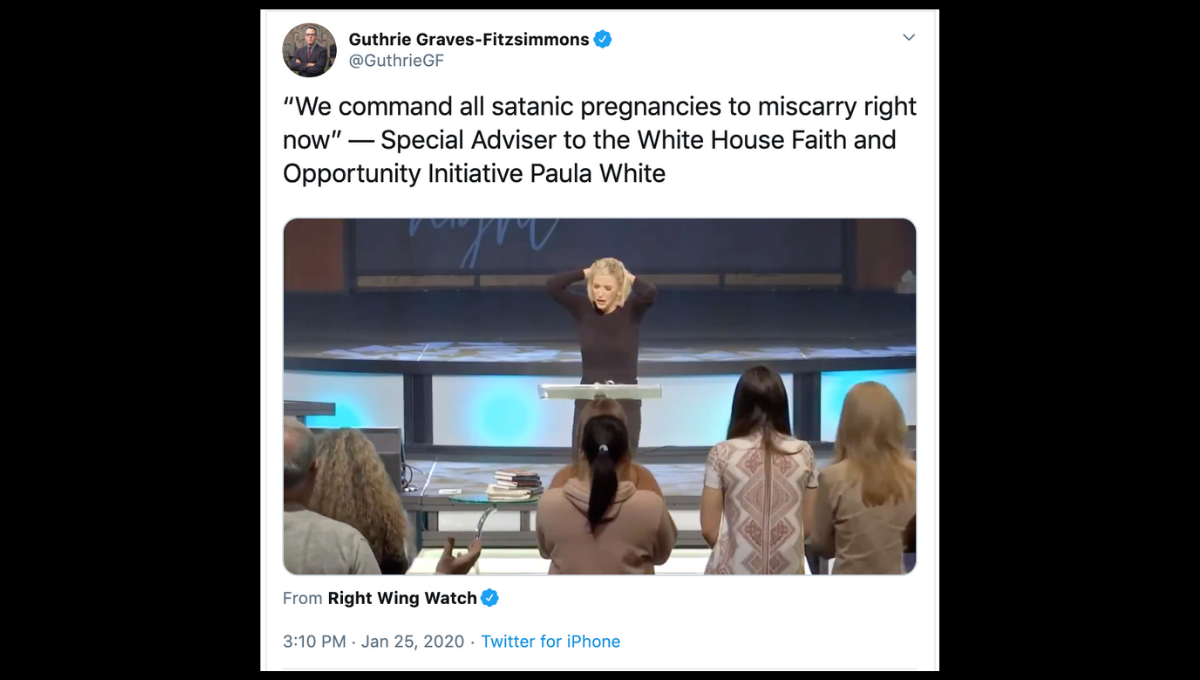 During a church service in January 2020, Paula White did say, "We command all satanic pregnancies to miscarry right now."

She may have been speaking figuratively.

In January 2020, readers asked us about the accuracy of reports that claimed Paula White, a televangelist and spiritual adviser to U.S. President Donald Trump, had prayed for "all satanic pregnancies to miscarry."

On Jan. 27, for example, Business Insider published an article with the headline "Paula White, a White House Employee and Trump's Spiritual Advisor, Calls for 'Satanic Pregnancies to Miscarry Right Now.'" That piece reported that:

Paula White, a controversial televangelist who joined the White House in an official capacity last year, is arguing that the content of a sermon she delivered on January 5, which mentioned adversaries of President Donald Trump and soon after advocated for divine forces to cause the miscarriage of babies in "satanic wombs," was taken out of context.

In a video of the sermon posted by Right Wing Watch, a news outlet that "monitors and exposes the activities of Radical Right political organizations," White can be heard mentioning adversaries of the president before calling on God to miscarry babies convinced by what she called "satanic wombs."

Similar articles were published by CNN and TIME magazine.

The 94-second video clip first emerged on the Twitter account of Right Wing Watch, on Jan. 24. The footage was then posted by Guthrie Graves-Fitzsimons, a left-leaning writer on religion, who captioned it as follows: "'We command all satanic pregnancies to miscarry right now' — Special Adviser to the White House Faith and Opportunity Initiative Paula White."

"I don't normally respond but clearly this has been taken out of context. I was praying Eph 6:12 that we wrestle not against flesh and blood. Anything that has been conceived by demonic plans, for it to be cancelled and not prevail in your life..."

The clip appears to show White in the middle of a stream of pronouncements, invocations, and prayers during a service at her church, the New Destiny Christian Center, in Apopka, Florida. CNN reported that the service in question took place on Jan. 5, but as of Jan. 28, the original, full-length video was no longer available on the website or social media profiles of White or the church.

Bearing in mind the video shows a 94-second excerpt from a much longer service, the following is a transcript of that segment:

We interrupt that which has been deployed to hurt the church in this season, that which has been deployed to hurt this nation. In the name of Jesus, forgive us for our sins. Come on, I need you guys to pray. We cancel every surprise from the witchcraft [sic] and the marine kingdom -- any hex, any spell, any witchcraft, any spirit of control, any Jezebel, anything that the enemy desires through spells, through witchcraft, through any way that is manipulation, demonic manipulation. We curse that. We break it, according to the word of God.

We put a series of questions about those remarks to Paula White Ministries, asking her to elaborate on her claim that she had been taken out of context, and also asking her to clarify whether she was referring literally to miscarriages, pregnancies, and wombs, or instead using figurative or symbolic language. We also asked her organization to share a copy of the full-length video of the service in question. Unfortunately, we received no response.

In her brief explanation on Twitter, White said she had been speaking about Chapter 6, Verse 12 of the Epistle to the Ephesians, and praying for "anything that has been conceived by demonic plans ... to be cancelled and not prevail in your life." Ephesians 6:12 reads as follows:

"For we wrestle not against flesh and blood, but against principalities, against powers, against the rulers of the darkness of this world, against spiritual wickedness in high places."

This invocation of a kind of spiritual battle, combined with White's reference to disrupting and halting "anything that has been conceived by demonic plans," would appear to indicate she was speaking figuratively about combatting "the enemy's" ill-conceived efforts, rather than referring to actual, physical wombs and miscarriages.

However, the same stream of pronouncements also included rather more literal, earthly references to fighting against "the marine kingdom" and "the animal kingdom," and without further clarification from White, ultimately it's not clear what the sense was — whether literal or figurative — of her references to ending "satanic pregnancies."