Did Paul George's Jersey Number Change After He Executed a 360 Dunk? 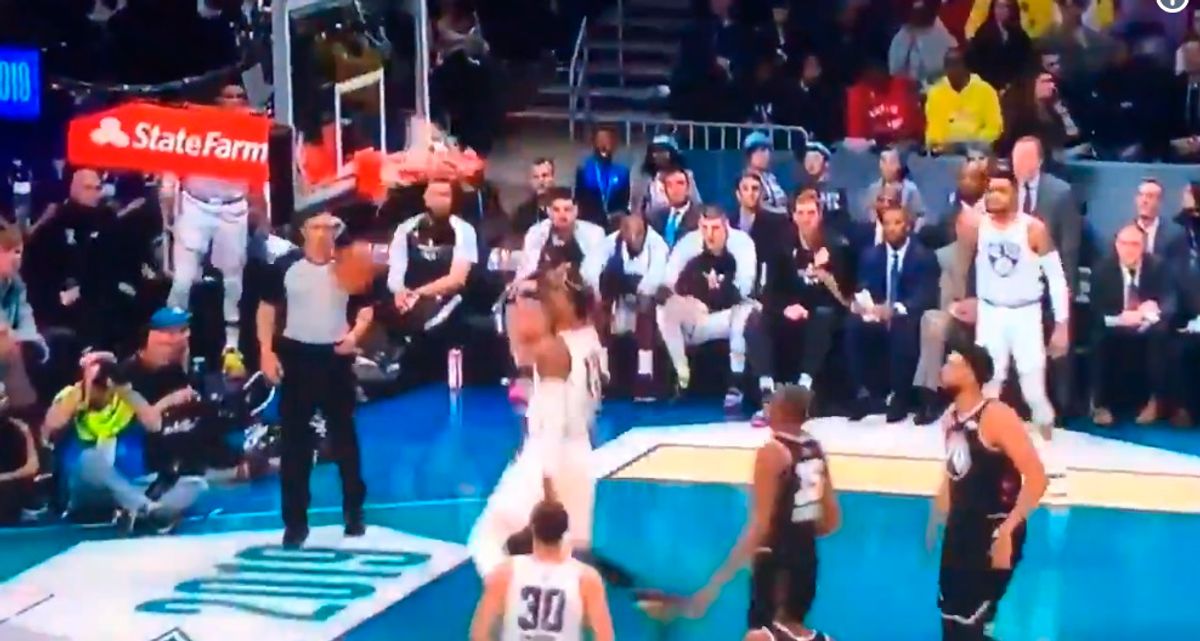 Claim:
A video shows Paul George's jersey number changing from 13 to 14 after he performed a 360 dunk.
Rating:

Basketball pro Paul George's athletic talents were on display during the 2019 NBA All-Star game, when the Oklahoma City Thunder star threw down a 360 slam. While most hoops fans marveled at George's dunking abilities, others noticed something a bit strange -- the number on his jersey appeared to change from 13 to 14 in mid-slam:

This is honestly scary, PG’s jersey changes from No. 13 to No. 14 after this dunk. pic.twitter.com/ZmXUUz5NCP

The online audience offered up a number of theories as to what this video captured. Some claimed (perhaps facetiously) that in addition to mastering the art of the dunk, Paul George was also a master of the dark arts. While we can't say whether or not the NBA star has an interest in sleight of hand tricks, we can say that this video does not document any sort of voodoo, wizardry, or witchcraft.

Another theory suggested that Paul George was wearing one of the NBA's new "smart jerseys." After all, during the 2019 All-Star weekend NBA commissioner Adam Silver did unveil such jerseys, which can alter the names and numbers they display on their backs with a few clicks of an app:

Adam Silver unveils the NBA jersey of the future. pic.twitter.com/h5GePOwOjx

While this was certainly a more plausible theory than black magic, Paul George wasn't wearing one of these "smart jerseys" either. For one thing, these "smart jerseys" are still in development and not currently available for purchase or use in official games. Second, the number change showcased by Silver was much slower than the number change that supposedly took place during George's in-game dunk. Furthermore, the NBA would have certainly been promoting these new "smart jerseys" more if George were truly wearing one during the game.

So was this footage digitally edited? This seemed to be the most likely explanation, but we examined the official footage posted to the NBA's YouTube channel and see any sign the video had been doctored. Rather, the official copy of this video seemed to show that the "magical" number change was merely an effect involving a uniform wrinkle and lighting conditions.

Slowing down the footage makes it apparent that George's jersey folded a bit, causing the "3" to briefly appear similar to a "4." The top of the "3" was still visible throughout, however, showing that the number on his jersey never actually changed.

We've compiled a few stills of this innocuous moment below (click to enlarge). Notice how the top of the 3 is partly visible in all of these images:

The "number change" can be seen around the 3:45 mark of the following video. It should be noted that a few seconds after this dunk, when George was on the other side of the floor, the number "13" was still clearly visible on his jersey: