A side-by-side comparison of the number of New England Patriots players at a White House event in 2015 and 2017 is real, but misleading. 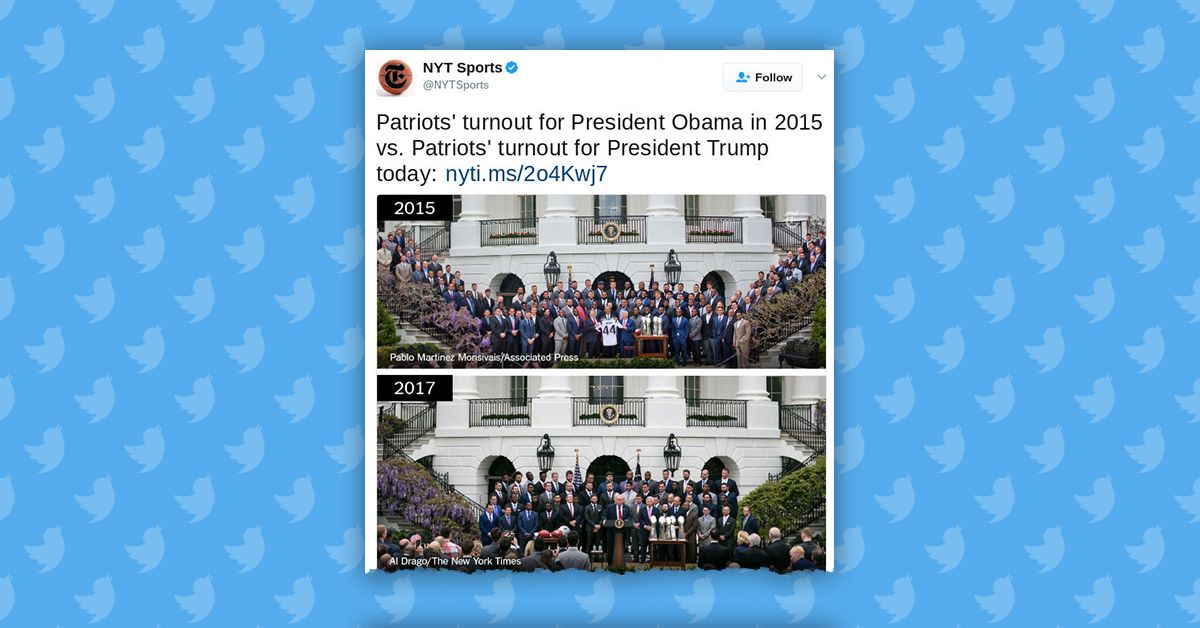 Claim:
A set of photographs accurately depict the number of New England Patriots players in attendance at a White House ceremony in 2015 and 2017.
Rating:

The photographs showing New England Patriots players at White House ceremonies in 2015 and 2017 are both authentic.

Some comparisons of the two photographs do not note that the 2015 image shows New England Patriots staff members in addition to players.

Former President Donald Trump's inauguration was not the only event to spark a crowd-size controversy during his first 100 days in office. On 19 April 2017, another emerged, this time regarding the number of New England Patriots football players attending a ceremony to honor their Super Bowl win. The New York Times Sports Twitter account posted photographs comparing the number of Patriots players at the 2017 ceremony with a similar ceremony in 2015: Both of these images are authentic, and are correctly attributed. However, posted side by side, they give a rather misleading impression of the difference in crowd size at the ceremonies. The top image, for instance, shows both players and dozens of team staff members. The New England Patriots took issue with the comparison on Twitter:

Although the images do not provide an accurate comparison between the attendance of the 2015 and 2017 ceremonies, it is true that more players attended the ceremony when Barack Obama was president. According to Patriots reporter Dan Roche, there were approximately 50 players present at the ceremony in 2015, opposed to only 34 in 2017.

But again, these numbers don't tell the whole story. Although several Patriots players did explicitly refuse to attend the 2017 event due to their opposition to the current president, politics wasn't the only factor for a drop in attendance. Patriots spokesman Stacey James told the Boston Globe that the low attendance was likely due to the fact that this was the second Super Bowl the team had won in three years:

“When you win two [Super Bowls] in three years, fewer people go than one in 10 years,” he said, noting that player turnout for the White House ceremonies between 2002 and 2005 decreased steadily.

“It’s just the way it goes,” James said. “It’s a long day. It’s a cool thing you do once — maybe you do it twice — but it’s just not necessarily something you choose to do every time. We had people today who were attending funerals, who were sick — it wasn’t political; it’s just life.”

If we look at the number of players in attendance after all of the Patriots recent Super Bowl victories, it appears that James is correct: Here are two images comparing the crowd size between 2002 and 2004 when the team won two Super Bowls in three years: White House fatigue may be one reason for the attendance drop this year, but it wasn't the only factor — and while James is correct that attendance dropped between 2002 and 2005, that drop occurred during the tenure of a single president, George W. Bush. The drop between 2015 and 2017, however, involved two different presidents, Barack Obama and Donald Trump.

Several players specifically stated that they were not attending the ceremony due to their opposition to former President Trump. Team captain Devin McCourty, for instance, explained his decision not to attend to TIME:

Basic reason for me is I don’t feel accepted in the White House. With the president having so many strong opinions and prejudices, I believe certain people might feel accepted there while others won't

LeGarrette Blount, Martellus Bennett, and Alan Branch all made similar statements. Although it is not uncommon for politics to play a role in White House visits (or absences), we did not find any Patriots players who explicitly declined their visit to the White House in 2015 due to former President Obama. Quarterback Tom Brady did not attend the 2015 ceremony (or 2017's), but in both cases he cited a scheduling conflict.

It is true that more New England Patriots players attended the Super Bowl ceremony at the White House in 2015 than in 2017. However, the viral set of images comparing these two events is misleading, and while several players stated that they did not feel welcome in former President Trump's White House, this was not the only reason for the decline in attendance.