No, the 'Patriot Front' Far-Right Rally in DC Was Not Faked

Right-wing politicians and commentators sought to play down a "Patriot Front" demonstration on the National Mall, in December 2021. 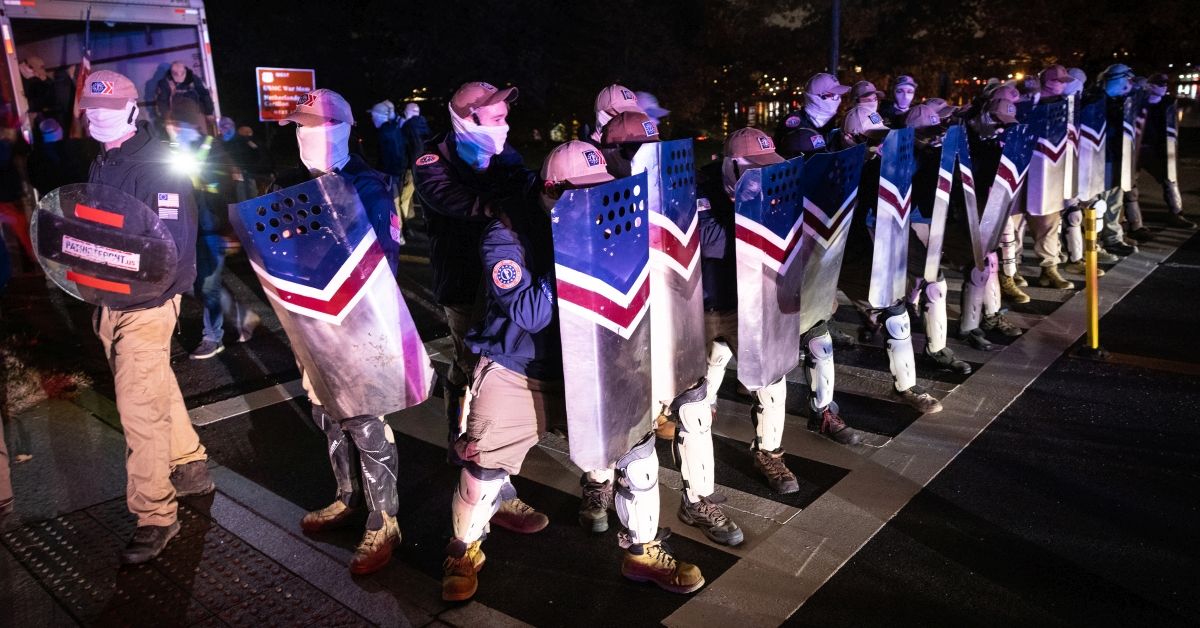 Claim:
A Dec. 4, 2021, rally in Washington D.C. was staged or faked by federal agents or actors, rather than a real white nationalist group called Patriot Front.
Rating:

In December 2021, members of a white nationalist group known as Patriot Front marched at the Lincoln Memorial and other parts of the National Mall in Washington, D.C., wearing face coverings and an improvised uniform of khaki pants and dark blue jackets, and carrying shields and American flags.

Images and videos from the rally were widely shared online, and the event attracted a measure of national news coverage.

However, several figures from the American right sought to undermine the authenticity of the rally, claiming variously that it was conducted by federal law enforcement agents in disguise, and/or left-wing agents provocateurs, or actors. For example, U.S. Rep. Marjorie Taylor Greene, R-Ga., described the men shown in one video as "movie characters": For his part, right-wing commentator Dinesh D'Souza speculated that the event was "fake," and conducted by "FBI agents," and asked "Where are the media interviews so we can see and hear directly from this group?"

On Telegram, far-right conspiracy theorist Jacob Wohl claimed "these are feds," on the basis that the men shown in videos appeared to be unusually slim, and Arizona state Sen. Wendy Rogers, a prominent supporter of disproven election fraud conspiracy theories, described Patriot Front as a "fake group" composed of "feds."

On Gateway Pundit, right-wing conspiracy theorist Jim Hoft described the event as "feds on parade," while on the right-wing website 100 Percent Fed Up, Patty McMurray falsely described Patriot Front as "a group no one has ever heard of."

While McMurray and others may not have been aware of Patriot Front's existence before December 2021, it is indeed a real, earnestly-motivated white nationalist group with a real, readily verifiable history. Its leader, a 23-year-old Texan named Thomas Ryan Rousseau, is a known far-right and fascist activist in the United States, and he was clearly visible and identifiable at the Dec. 4 National Mall rally.

Claims that the event was faked or staged, by federal agents or actors, are entirely lacking in evidence, and are contradicted by the best available evidence. As a result, we are issuing a rating of "False."

Who Is Patriot Front?

The origins of the group can be traced back to the aftermath of the infamous "Unite the Right" rally in Charlottesville, Virginia, in August, 2017. The far-right and white supremacist demonstration descended into chaos and violence, culminating in an incident in which neo-Nazi sympathizer James Fields ploughed a car into a crowd of anti-fascist and anti-racist counterprotesters, killing Heather Heyer and injuring several others.

Rousseau, then 18 years old, led a contingent from the neo-Nazi group Vanguard America, using the high-profile Charlottesville rally as an opportunity to strengthen his claim on the organization, amid a leadership struggle that summer. Fields dressed in a Vanguard uniform, but was reportedly not a recognized member of the group. In a still image posted online by the Southern Poverty Law Center, Fields can be seen standing close to Rousseau in Charlottesville.

Patriot Front, then, was originally a splinter group from Vanguard America, led by Rousseau — a native of the Dallas-Forth Worth suburb of Grapevine — and started in late 2017. Far from being an "unknown" entity that suspiciously materialized out of nowhere in December 2021, both Patriot Front and Rousseau have been the subject of monitoring and news coverage since that time. The Anti-Defamation League, for example, has kept a public file on the group for at least 3 1/2 years.

In May 2017 emails obtained by the Texas Observer, and seen by Snopes, an FBI special agent warned college administrators in North Texas that a "Thomas Ryan Rousseau" was one of four individuals believed to be responsible for posting white supremacist flyers on local campuses. At the time, Rousseau was still attending Coppell High School, and writing nationalist, pro-Trump columns for the student newspaper.

Rousseau has been arrested or cited by police on at least two occasions, for misdemeanors relating to defacing property with white nationalist propaganda.

He has described himself as a fascist, but Patriot Front's manifesto does not include any such keywords, instead placing an emphasis on American nationalism and a return to traditional values.

According to in-depth research by ProPublica, this is part of a careful strategy, personally overseen by Rousseau, to soften Patriot Front's image, keeping its white supremacist, racist, anti-Semitic and violent tendencies out of sight when conducting public outreach or holding events such as the Dec. 4 rally at the National Mall.

No doubt exists that Rousseau was present at the Dec. 4 Patriot Front rally in Washington, D.C., and that he led the participants in chanting various slogans, before making a speech outside the U.S. Capitol. Ample video evidence, posted to Telegram by Patriot Front itself, as well as a white nationalist propaganda platform called Media2Rise, demonstrates definitively that Rousseau led the rally.

For example, in one clip, white nationalist propagandist Lucca Corgiat, who was embedded with Patriot Front throughout Dec. 4, introduces Rousseau by his first name, asking him to explain why the group is demonstrating in the nation's capital:

Rousseau stood out from other participants in not wearing a face covering, and was therefore readily identifiable throughout the rally, as a still image from another Media2Rise video, and the following Patriot Front screenshot, both illustrate: Getty photographer Win McNamee also took pictures of Rousseau at the Dec. 4 rally, including the following one: Patriot Front founder Thomas Rousseau waits along the George Washington Parkway near Arlington Cemetery after the group marched on the National Mall on December 04, 2021 in Arlington, Virginia. (Photo by Win McNamee/Getty Images)

For reference, the following is a still image of Rousseau taken from an August 2021 video posted to Telegram by Patriot Front: It is a demonstrable fact that Rousseau attended the Dec. 4 Patriot Front rally in Washington, D.C., in his capacity as leader of that organization — a white nationalist, far-right group. Rousseau and Patriot Front have been the subject of considerable social media self-promotion, as well as investigative news coverage, for nearly five years.

Furthermore, those claiming that the Dec. 4 rally was a "false flag" event perpetrated by left-wing agents provocateurs or federal agents, have presented no credible evidence to that effect.

Snopes invited Taylor Greene to provide any evidence that would support her claims about the authenticity of the rally. A spokesperson for the Congresswoman asked us, in turn, "What proof do you have to the contrary?" In response, Snopes outlined that proof for the spokesperson, and repeated our request for evidence from Taylor Greene. We did not receive any further responses.

Arizona State Senator Wendy Rogers did not respond to a similar request for evidence from Snopes.