The Origins of Princess Leia's Hairstyle 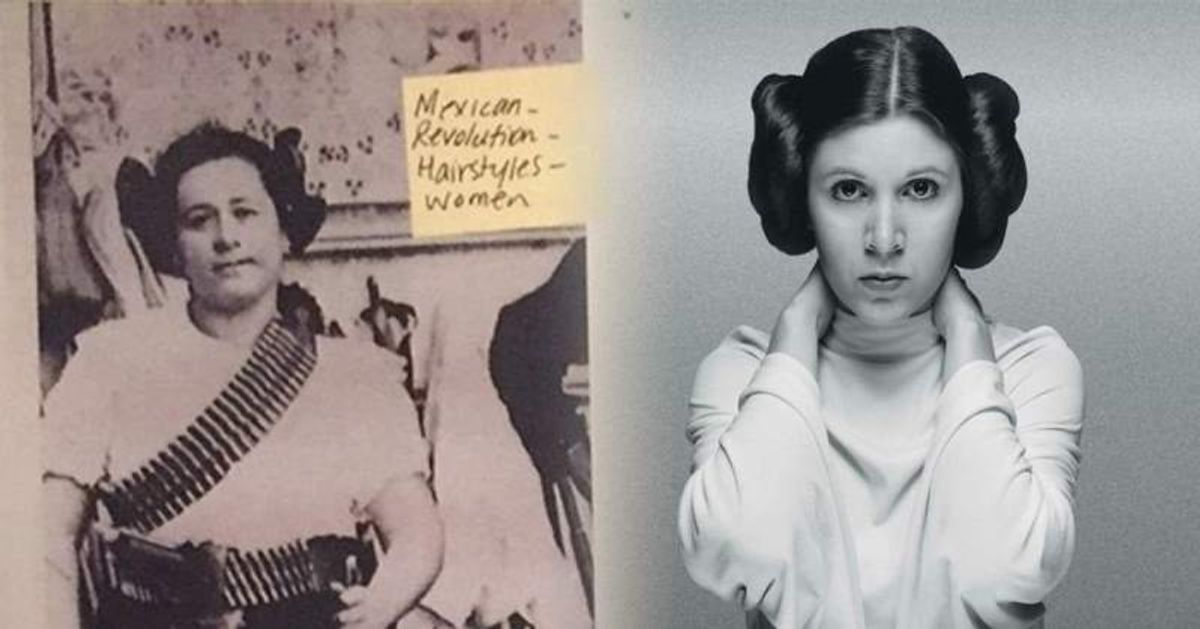 Claim:
Princess Leia's "hair buns" in Star Wars were inspired by those of a Mexican revolutionary.
Rating:

Following the death of Carrie Fisher, the resurgent interest in her most famous role (that of Princess Leia in Star Wars) prompted renewed attention to the subject of the inspiration behind the most distinctive aspect of her character's appearance:

The debate regarding Princess (later General) Leia Organa's hair, and specifically her hair buns, began in 2002 when Star Wars creator George Lucas offered this explanation about it to Time magazine:

In the 1977 film, I was working very hard to create something different that wasn’t fashion, so I went with a kind of Southwestern Pancho Villa woman revolutionary look, which is what that is. The buns are basically from the turn-of-the-century Mexico. Then it took such hits and became such a thing.

But as Remezcla reported, the claim came under question when the character's hair was compared to pictures of adelitas, as women who fought in the Mexican revolution were called, that exhibited no such hairstyle:

Lucas’ revelation of the hairstyle’s origins only seemed to cause confusion across the internet. Some found it difficult to find photographic evidence for Lucas’ claims. Perhaps, they only saw images of soldaderas wearing hats. (All Star Wars historian Michael Heilemann could find were these bun-less images of adelitas.) As a result, some began to look elsewhere to find other possible explanations.

In fact, some critics argued, Leia's hair more closely resembled a traditional hairstyle worn by women of the Hopi Native American tribe. But Eric Tang, an associate professor of African and African Diaspora Studies at the University of Texas-Austin, added to the discussion when he posted a picture (that post being no longer publicly available on Facebook) taken from a Star Wars exhibition currently on display at the Denver Art Museum that seemingly supported the "Mexican revolutionary" claim.

The museum confirmed to Snopes on 30 December 2016 that the referenced photograph was part of their exhibition, and sent us full-length pictures of the display, as well as a transcription of the audio accompanying it: Princess Leia’s side cinnamon-bun hairdo was one of the most iconic looks from the original "Star Wars" films. Some twenty years later, actress Natalie Portman wore these fake hair rolls to reprise the hairstyle as Padmé Amidala in the film "Attack of the Clones." Clearly, George Lucas and his team had learned a thing or two in the intervening years. While it took actress Carrie Fisher two hours to have her hair done as Leia, Portman could just pop on her side buns in a matter of minutes.

But where did this unusual hairstyle originate in the first place? Look for some of the reference photos nearby. For Princess Leia in the original "Star Wars," George Lucas was inspired by a traditional Hopi Native American hairstyle. For Leia’s mother, Padmé, Lucas’ prequel team looked at Hopi and Mexican Revolution imagery for inspiration, and sketched even more dramatically shaped variations of the coiffure — as you can see in the drawing in this display.

The response to Leia’s hair had been so overwhelming in the 1970s and beyond, that Lucas encouraged the prequel designers to be even more outlandish, drawing everything from space mohawks to snakelike coils, hair nautilus shells, and everything in between.

A museum spokesperson could not directly confirm the origin of the picture other than to say it was "sourced from the Lucas Museum of Narrative Art archives at Skywalker Ranch." (We contacted Lucasfilm seeking additional information, but the film company did not respond.) However, we were able to track it down fairly easily, as it is a famous photograph of Mexican soldadera and guerrilla fighter Clara de la Rocha, as seen below (alongide her father, General Herculano de la Rocha): Clara de la Rocha is described in the book Las Soldaderas: Women of the Mexican Revolution as a guerilla commander who played an important role in the seizing of the city of Culiacán, Sinaloa in 1911, alongside her father. She eventually earned the rank of coronela, or colonel, in the fight against Porfirio Diaz's regime.

One of her descendants, Alexandra de la Rocha, told Public Radio International that she saw Tang's post about the exhibit and recounted some of the soldadera's exploits:

She actually crossed a river on horseback ... and was able to take out a power station in order to allow the rebel forces to attack during night without being seen. he was a grizzled woman, as her father was. They were mountain people, and were actually miners and owned a lot of land. They were business people.

Clara de la Rocha died in 1970 in Culiacán, the site of her most famous battle. While she was certainly not the only inspiration for the Leia Organa character's hairstyle, she was by all accounts a major one.