Does This Photograph Show Two Boys — One Vaccinated, One Not — Who Were Exposed to Smallpox?

In the early 1900s, Allan Warner documented several cases of smallpox and the effects of vaccinations. 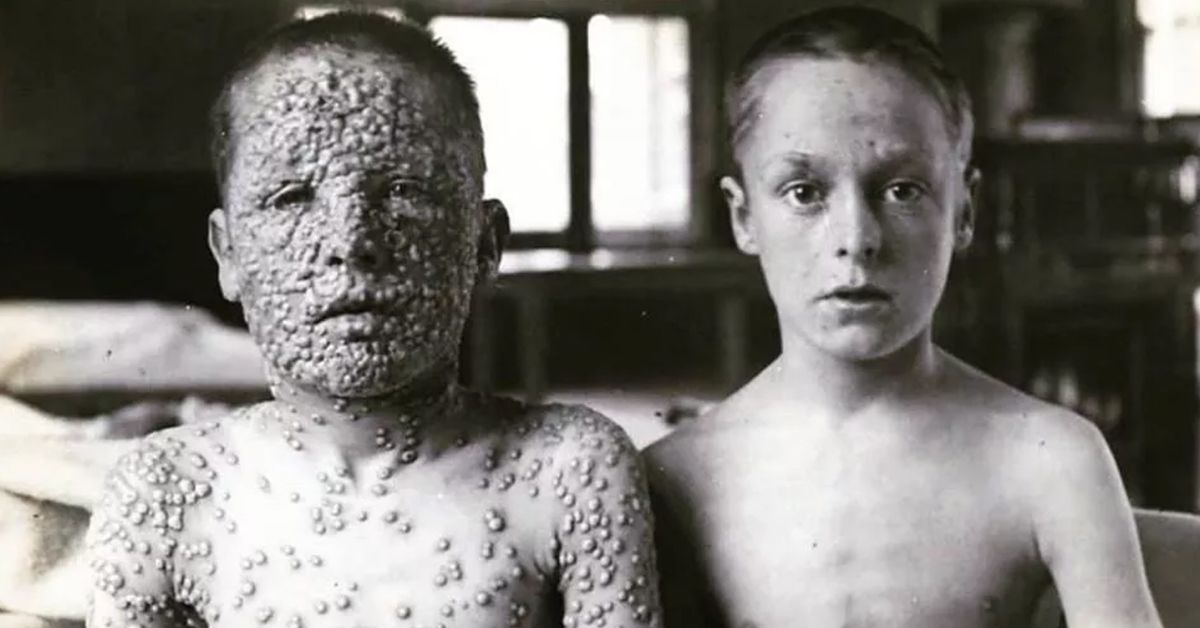 Claim:
A photograph shows the dramatic differences in two boys who were exposed to the same smallpox source.
Rating:

The importance of the smallpox vaccination tends to go unnoticed in modern society, as the disease was officially eradicated by the 1980s. But Internet users were reminded of this terrible disease, the medicine that helped eliminated it, and the utility of vaccinations in general in June 2018, when a shocking photograph purportedly showing two children who had been exposed to the same smallpox source was posted to Reddit: These two boys had been exposed to the same smallpox source. One had been vaccinated, the other hadn't.

This is a genuine photograph that was taken in the early 1900s by Dr. Allan Warner of the Isolation Hospital at Leicester in the UK. Warner photographed a number of smallpox patients in order to study the disease. In 1906, the Scottish Medical and Surgical Journal noted the importance of Warner's work:

Smallpox of all the eruptive fevers best lends itself to illustration by photograph, and the photographs in this fasciculus of the eruption of smallpox which it has been our good fortune to see. They are the work of Dr. Allan Warner of the Isolation Hospital at Leicester, and they show very distinctly the different stages and varieties of the small pox eruption. Their value is enhanced by the fact that the progress of the eruption is illustrated by a series of plates of one and the same patient, both in the discrete and in the confluent variety of the fever.

Other plates are given showing cases of mild smallpox as it occurs in the vaccinated, and we are particularly impressed by the concluding series of photographs in which the advantages of vaccinations are well brought out by the method of showing side by side individuals infected from the same source, of whom one has been vaccinated and the other not. These pictures would be of the greatest use to those who give popular lectures on vaccination, and are also very useful as illustrations of modified smallpox.

The medical journal here is referring to a series of photographs by Warner that were published in the Atlas of Clinical Medicine, Surgery, and Pathology a few years previously, in 1901. This particular photograph was originally accompanied by a caption which stated that both children were 13 years old, that they had both been infected by the same smallpox source on the same day, but that only one had received a vaccination in infancy:

More photographs of this nature can also be found in this volume. For instance, the following photograph shows two sisters aged 21 and 15 who were exposed to the same source of smallpox on the same day. Again, only one of the sisters had received a vaccination: A vaccination for smallpox was developed by an English doctor named Edward Jenner in the late 1700s. It would eventually lead to the eradication of smallpox, but in the 1700s as in the first decades of the 21st century, physicians faced opposition from anti-vaccination groups. Professor Gareth Williams, chair of the Jenner Trust, used Warner's photographs during a presentation at Gresham University about the history of the anti-vaccination movement. According to Williams, the parents of the boy on the left in the viral image were swept up by anti-vaccination fervor when they decided not to inoculate their child:

The Members of Parliament were anti-vaccination. Gloucester, which of course was Jenner’s own county town, was one such centre. So to were Leeds, Leicester, Glasgow and Liverpool amongst others.

Williams Gareth.   "From Jenner to Wakefield: The long shadow of the anti-vaccination movement."     Gresham University.   28 September 2011.