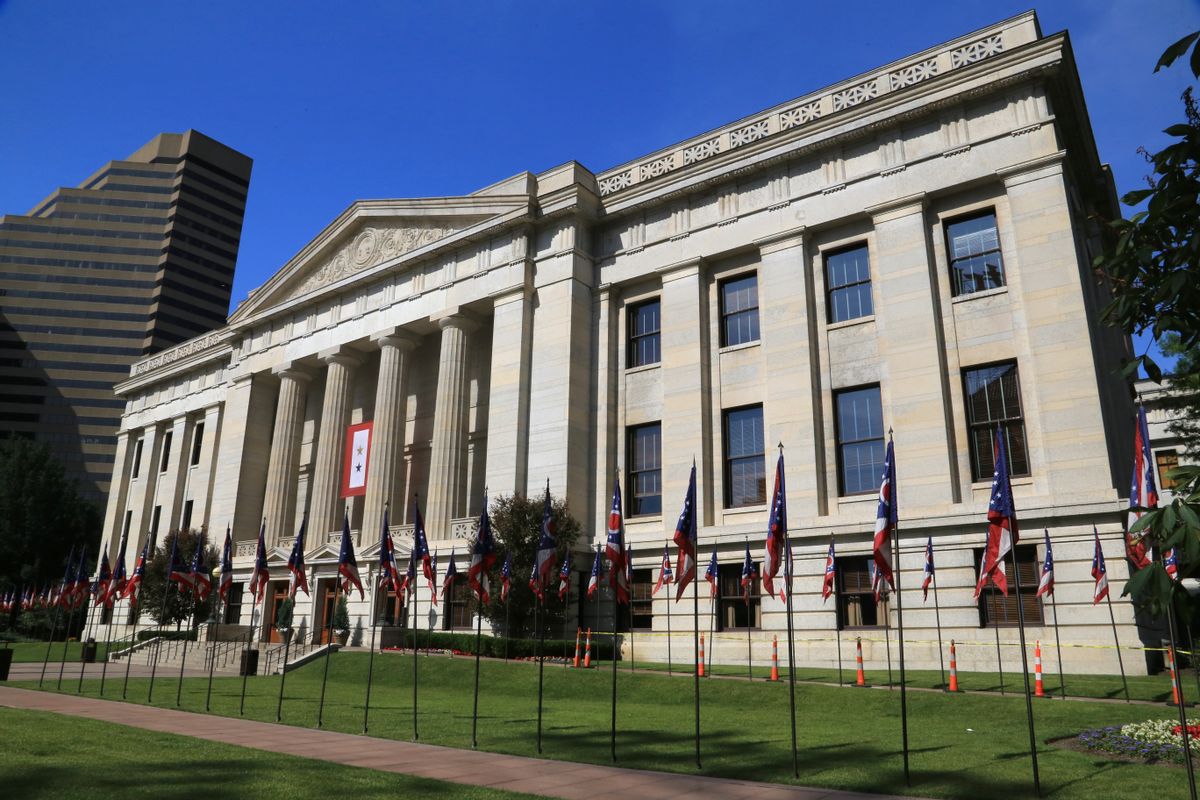 The Senate Building, built of Columbus limestone, was constructed between the years 1899 and 1901. Designed by Samuel Hannaford and Sons of Cincinnati Ohio. (Image Via Getty Images)

In April 2019, the Christian conservative television network CBN News reported that a Democratic member of the Ohio state House of Representatives had "drafted a measure" that would have excluded "black babies" from stringent new restrictions on abortion.

On 16 April, the website published an article with the headline, "Ohio Democrat Drafted Measure to Exclude Black Babies from Being Saved Under Pro-Life Law," which reported that:

Last week, Ohio Gov. Mike DeWine signed into law a bill that bans abortions as soon as the baby's heartbeat is detected, which can be as early as six weeks. But before it passed, a Democrat state representative from Ohio tried to make sure African-American babies were excluded from the pro-life bill and could be aborted for any reason up to 20-weeks.

Rep. Janine Boyd proposed Amendment 0291 which would have provided an exception for black mothers to abort their babies. Boyd suggested protecting black children from abortion is akin to slavery. "Black slaves were once treated like cattle and put out to stud in order to create generations of more slaves," she said during her remarks, which were broadcast on The Ohio Channel. "Our country is not far enough beyond our history to legislate as if it is."

CBN News' article prompted several inquiries from readers about the veracity of the claim that Boyd had proposed excluding women and/or their children from the consequences of the legislation in question, on the basis of their race.

Boyd did indeed propose an amendment that would have done just that, had it not been voted down in committee, and the core claim in the CBN News article was therefore accurate.

On 12 February, Republican State Sen. Kristina Roegner introduced Senate Bill 23, which would in most cases prohibit abortions where a doctor finds evidence of a fetal heartbeat, an event that can happen relatively early in pregnancy, meaning the effect of the bill would be to ban a large proportion of abortions in the state of Ohio.

The text of the bill stated:

Sec. 2919.195. (A) Except as provided in division (B) of this section, no person shall knowingly and purposefully perform or induce an abortion on a pregnant woman with the specific intent of causing or abetting the termination of the life of the unborn human individual the pregnant woman is carrying and whose fetal heartbeat has been detected in accordance with division (A) of section 2919.192 of the Revised Code. Whoever violates this division is guilty of performing or inducing an abortion after the detection of a fetal heartbeat, a felony of the fifth degree.

The Senate passed the legislation on 13 March, and the House of Representatives followed suit on 10 April. Ohio Gov. Mike DeWine signed the bill into law on 11 April.  The American Civil Liberties Union (ACLU) had already vowed to challenge the law in federal court, asserting that it was "a direct violation of the Constitution and a complete undermining of Roe v. Wade," the 1973 case in which the U.S. Supreme Court ruled that access to abortion was constitutionally protected under the Fourth Amendment right to privacy.

During a House of Representatives Health Committee debate on 9 April, Boyd, the Democratic ranking member, proposed amending the legislation to effectively exclude African-American women from its restrictions and requirements, meaning doctors would not be obliged to test for a fetal heartbeat where the woman was African-American, and in such an instance, an abortion could take place even if a heartbeat was found.

In proposing her amendment, Boyd made somewhat unclear comparisons between the history of slavery in the United States and the abortion restrictions contained in Senate Bill 23. She appeared to compare the control exerted over black women during slavery with the enhanced restrictions on women's access to abortion contained in Senate Bill 23, calling for black women, in particular, to be exempted from those restrictions, in light of that history. We contacted Boyd's office for clarification, but we did not receive a response in time for publication. During the hearing, Boyd said:

The United States is about 242 years old. We're not the youngest but we are by far not the oldest. There are many countries much older than we are. Still trying to find ourselves, almost like teenagers. When I think about how young we are, I think about and I consider our history -- both the beautiful sides and the very ugly sides, specifically slavery.

And so I submit to you respectfully that our country is not far enough beyond our history to legislate as if it is. And so I ask you, with all of your values, to consider that, and vote Yes to this amendment.

The House Health Committee rejected Boyd's amendment along party lines, with all 11 Republican members voting against it and all seven Democrats supporting it.