A Facebook video post featuring Lou Dobbs misleadingly claimed that the Obama administration is fighting in court to allow non-citizens to vote. 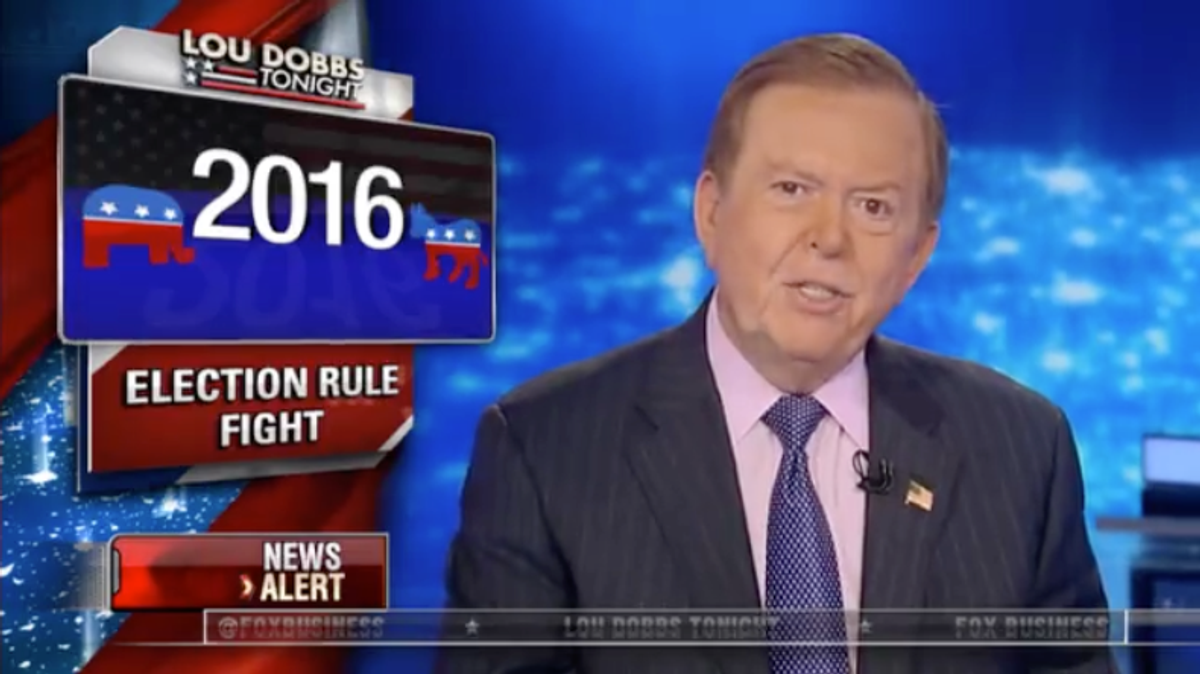 Claim:
The Obama Administration is "fighting in court" to allow non-citizens to vote in general elections.
Rating:

The League of Women Voters (along with the NAACP and other parties) filed for injunctive relief against the Election Assistance Commission on 12 February 2016 due to unilaterally imposed voter registration restrictions requiring "documentary proof" of American citizenship; current law prohibits non-citizens from registering to vote or voting under penalty of perjury.

The ultimate outcome of a 9 March 2016 hearing on the suit's merits.

On 22 February 2016, the above-quoted text (and embedded video) began to get passed around on social media.  The initial portion was transcribed and published by the Lou Dobbs Facebook page. Dobbs continued, concluding:

...both organizations fighting to overturn state laws that ensure only citizens are allowed to register to vote when they use a federally designed registration form. Incredible.

Dobbs didn't reference any specific "election rule fight" in the clip, and the information above (including the subsequent commentary) made up all of the detail provided by the clip. Sifting through Dobbs' claim without specifics was difficult, but the comments in the clip matched up with a 22 February 2016 National Review item:

Several well-funded organizations — including the League of Women Voters and the NAACP — are fighting efforts to prevent non-citizens from voting illegally in the upcoming presidential election. And the United States Department of Justice, under the direction of Attorney General Loretta Lynch, is helping them.

On February 12, these groups filed a lawsuit in D.C. federal court seeking to reverse a recent decision by the U.S. Election Assistance Commission (EAC). The Commission’s decision allows Kansas and other states, including Arizona and Georgia, to enforce state laws ensuring that only citizens register to vote when they use a federally designed registration form. An initial hearing in the case is set for Monday afternoon, February 22.

National Review linked to a statement issued by the League of Women Voters announcing a lawsuit against the Election Assistance Commission, on the grounds that EAC executive director Brian Newby acted illegally in approving requests from three states (Alabama, Georgia, and Kansas) to require "documentary proof" of citizenship in order to vote:

Washington, DC – The League of Women Voters of the U.S. and its Alabama, Georgia and Kansas affiliates filed suit today in federal district court to stop the recent illegal action by the Executive Director of the U.S. Election Assistance Commission (EAC) that allows these states to restrict voter registration.

“Voters should not have to face an obstacle course to participate and vote,” said Elisabeth MacNamara, president of the League of Women Voters of the U.S. “The recent decision by EAC Executive Director Brian Newby is simply contrary to federal law and we expect it to be overturned.”

Acting unilaterally, Mr. Newby recently approved requests from Alabama, Georgia and Kansas to require documentary proof of citizenship when an applicant uses the federal mail voter registration application form. The Help America Vote Act of 2002 requires the full commission itself to vote on any changes, but Mr. Newby ignored that obligation.

According to the complaint, the issue wasn't just the modification of the law but that Newby acted unilaterally, which goes against longstanding Commission policy.  In the "complaint for declaratory and injunctive relief," the plaintiffs alleged Newby's "actions violated the Administrative Procedure Act ('APA') in at least five respects":

The suit listed five reasons the plaintiffs believed Newby did not have the authority to unilaterally grant such requests:

Finally, the Executive Director exceeded the scope of the EAC’s statutory authority, which precludes any documentary proof of U.S. citizenship requirement absent a showing of necessity.

The complaint went on to cite a 2015 Tenth Circuit Court ruling that "documentary proof of citizenship requirements were inconsistent with the purposes of the [National Voting Rights Act]," stating "the EAC’s prior Executive Director rejected [states' requests] in 2014, based on existing EAC policy":

Beginning with Arizona in 2006, several states have requested—multiple times in some cases, like Kansas and Arizona—that the EAC amend the Federal Form to require documentary proof of citizenship. The EAC has repeatedly denied those requests.

Arizona’s refusal to accept voter registration applications on the Federal Form without documentary proof culminated in the U.S. Supreme Court’s decision in ITCA, 133 S. Ct. 2247, which held that States must “accept and use” the Federal Form as implemented by the EAC. Arizona, Kansas and Georgia thereafter submitted new requests to require documentary proof of citizenship, which the EAC’s prior Executive Director rejected in 2014, based on existing EAC policy, in a formal decision finding that documentary proof of citizenship requirements were inconsistent with the purposes of the NVRA, and were not shown to be necessary by any evidence provided by the States. The U.S. Court of Appeals for the Tenth Circuit affirmed the prior Executive Director’s decision and rejected Kansas and Arizona’s subsequent APA challenge (Georgia did not challenge the EAC’s decision). See Kobach v. U.S. Election Assistance Comm’n, 772 F.3d 1183 (10th Cir. 2014), cert. denied, 135 S. Ct. 2891 (2015).

According to the documents, the timing of the unilateral action was potentially suppressive to voters in the 2016 primary and general elections, and that existing laws already prevented non-citizens from registering to vote in either cycle under penalty of perjury (in a larger argument that such "protections" were unnecessary under standing law):

The complaint said that the actions taken would prevent citizens otherwise legally entitled to vote from registering:

Requiring documentary evidence of citizenship pursuant to the EAC Executive Director’s recent actions substantially and illegally burdens the rights of voter registrants in violation of the NVRA, the APA, and the Commission’s regulations, and hinders the ability of the Plaintiffs to carry out their mission of promoting voter participation through voter registration drives. It also forces Plaintiffs in all affected jurisdictions to expend substantial resources to educate the public about the new requirements, when Plaintiffs have already, in the current election cycle, spent significant time and money to educate voters about existing voter registration rules that now could be changed mere weeks or months before the election. Further, it requires Plaintiffs to divert resources previously used to help voters register to instead assist eligible applicants in securing proper proof-of-citizenship documents in order to exercise their right to vote.

Attorney General Loretta Lynch's name appeared on page 215 of the suit, on an included summons.  Lynch did not appear to be a plaintiff in that document: Politico reported that the DOJ backed "the issuance of a court injunction blocking a federal official's decision to approve new voter registration forms that allow three states to insist that voters provide copies of documents proving their U.S. citizenship":

The Justice Department is representing the commission and Newby in the case and turned heads by agreeing to a preliminary injunction nullifying Newby's action.

In his order Tuesday, Leon called that step "extraordinary." The judge is an appointee of President George W. Bush.

An attorney with New York University's Brennan Center, which is backing the suit, expressed dismay at Leon's ruling but stressed it was just an initial decision.

"We’re certainly disappointed the judge didn’t grant the temporary restraining order, [but] we are confident we have a strong case," the Brennan Center's Wendy Weiser said. "It’ll be considered in two weeks. There's still plenty of time to resolve this issue favorably before, certainly the November election and hopefully sooner than that."

In a 22 January 2016 court document supplied by Politico, two Department of Justice attorneys held that "the Court should grant plaintiffs’ motion for a preliminary injunction, on the ground that the January 29, 2016 decisions did not determine that the approved information was 'necessary' to determine state eligibility requirements or articulate reasons pursuant to that statutory criterion":

The United States consents to plaintiffs’ request for entry of a preliminary injunction. On January 29, 2016, the Executive Director of the U.S. Election Assistance Commission (“Commission”) approved the requests of three states—Alabama, Georgia, and Kansas—to modify their state-specific instructions on the National Mail Voter Registration Form (“Federal Form”). However, in deciding to include the states’ documentary proof of citizenship requirements on the Federal Form, the Executive Director did not make the determination that this information was “necessary to enable the appropriate State election official to assess the eligibility of the applicant and to administer voter registration and other parts of the election process.” 52 U.S.C. § 20508. Because the National Voter Registration Act permits only information satisfying this “necessity” requirement to be included on the Federal Form, the Executive Director’s decisions are not consistent with the statute. While plaintiffs have made a number of other arguments, the Court need not reach them in order to issue an injunction. The United States requests that the decisions be enjoined on this narrow ground.

So while Dobbs was correct in stating that the LWV, NAACP, and other parties filed a suit and request for injunctive relief, the clip also led a large number of readers and viewers to believe that the plaintiffs sought to allow non-citizens to vote in elections.

That was misleading, as the suit alleged that the requirement for documentary proof in an election year posed an undue burden on citizens registering to vote. Under the NVRA of 1993, all individuals registering to vote must swear under penalty of perjury that they are United States citizens. The plaintiffs sought not to overturn or weaken that law, but to challenge new requirements for citizens to provide documentation of citizenship in order to vote.

While listed plaintiffs included the LWV and the National Association for the Advancement of Colored People, neither the Obama administration nor the Justice Department were named as parties to the suit. Named defendants were Newby and the EAC.

Finally, the DOJ backed the plaintiff's request for an injunction (denied on 23 February 2016, pending a 9 March 2016 hearing), but was not directly a party named in the suit.