Did Obama Suggest 'More Flexibility' Toward Russia After the 2012 Election?

In 2012, President Obama was overheard over a hot microphone telling President Dmitri Medvedev of Russia he would have "more flexibility" to negotiate with Putin after the election. 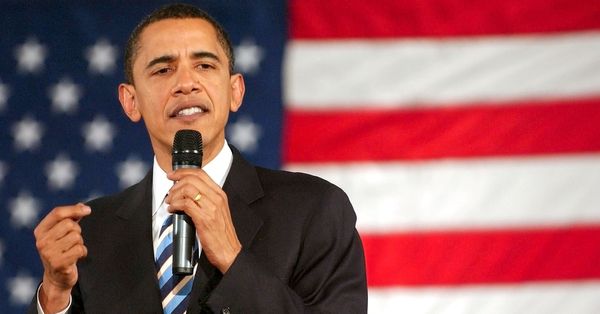 Claim:
A hot microphone picked up President Obama telling Russian President Dmitri Medvedev he would have more flexibility to negotiate on issues such as missile defense after the 2012 election.
Rating:

In December 2016, amid reports that U.S. intelligence officials had determined that the Russian government purposely meddled in the 2016 presidential election to help Donald Trump win, partisan sources recirculated four-year-old stories about a 2012 incident in which President Obama was overheard whispering to then-Russian President Dmitri Medvedev that he (Obama) would have more flexibility to negotiate after the U.S. election that November.

According to news reports at the time, the incident happened as described. The occasion was a joint press opportunity with Medvedev prior to a global nuclear security summit in Seoul, South Korea. According to Reuters, snippets of conversation between the two were picked up by live microphones before the meeting got underway:

As he was leaning toward Medvedev in Seoul, Obama was overheard asking for time -- "particularly with missile defense" -- until he is in a better position politically to resolve such issues.

"I understand your message about space," replied Medvedev, who will hand over the presidency to Putin in May.

"This is my last election ... After my election I have more flexibility," Obama said, expressing confidence that he would win a second term.

"I will transmit this information to Vladimir," said Medvedev, Putin's protégé and long considered number two in Moscow's power structure.

The exchange, parts of it inaudible, was monitored by a White House pool of television journalists as well as Russian reporters listening live from their press center.

The audible portions of the conversation were captured on video:

Issues surrounding a planned NATO missile defense system had been a sticking point in relations between the two nations for some time, the Telegraph reported:

Mr Putin said earlier this month that Washington's refusal to offer Moscow written guarantees that its missile defence system would not be aimed against Russia deepened its concerns.

Obama's intended off-the-record assurances to the transitioning Russian leadership were roundly criticized by his political opponents, who feared it signaled a lack of resolve on the president's part, the Los Angeles Times reported:

Mitt Romney, the front-runner for the Republican nomination, accused Obama of "pulling his punches with the American people" and obscuring his plans for the missile defense system.

House Speaker John A. Boehner (R-Ohio) said "we look forward" to hearing what the president meant by "more flexibility" when he returns from South Korea.

John Bolton, ambassador to the United Nations during the George W. Bush administration, called Obama's comments a "fire bell in the night," which signaled not only that Obama would scale back the missile defense program, but also that he might be planning to give ground on a range of national security priorities.

Obama is too much of "a politician to entirely show his hand in the first term, but it would be open season" if he is reelected, Bolton said.

Since 2012 is an election year in both countries, with an election and leadership transition in Russia and an election in the United States, it is clearly not a year in which we are going to achieve a breakthrough.

Obama was quoted the following day saying he wasn't trying to "hide the ball," and would carry through with negotiations with Russia. In May 2016, after nearly a decade of planning (and over the continued objections of Russia), the NATO missile defense system in Europe was finally launched.

Fast-forwarding to December 2016, it is unclear precisely what equivalence, if any, is supposed to exist between Obama's 2012 vow of "flexibility" and claims that Russia took Trump's side in the presidential election, but sources such as CNSNews.com emphasized Obama's persistent criticism of Trump's alleged closeness to Vladimir Putin:

While campaigning for Hillary Clinton in October, Obama criticized Republican Donald Trump's "continued flattery of Mr. Putin and the degree to which he appears to model many of his policies and approaches" after those of Putin.