Did Noodles Freeze Mid-Air Due to Cold Weather?

Just how cold does it get in Novosibirsk, Russia? 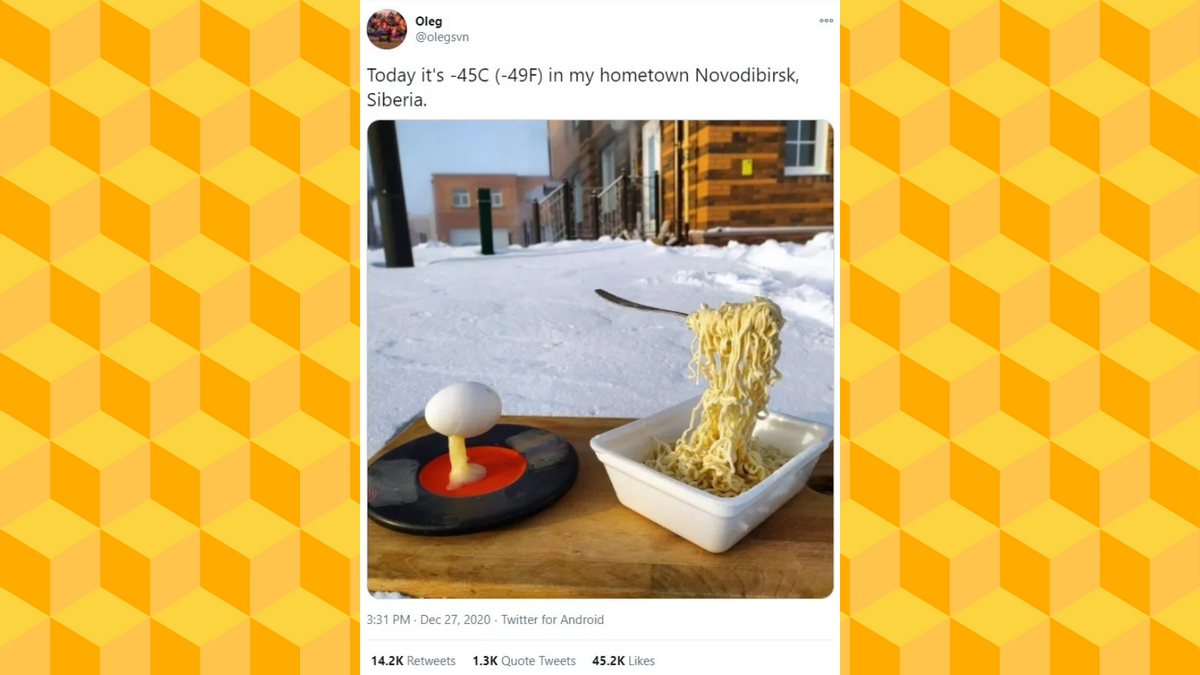 In December 2020, a photograph showing a plate of noodles and a cracked egg that supposedly froze solid while suspended in air due to extremely cold temperatures in Novosibirsk, Russia, was widely circulated on social media: We haven't been able to find too many specifics about this picture. However, this appears to be its first posting. Twitter user @Olegsvn has tweeted about his hometown of Novosibirsk before, and temperatures truly did dip into the negative 40s in the final week of December.

We don't see any reason to be skeptical about the claim in this tweet, especially since Oleg is not the first person to create this sort of frozen food display. Several photographs, videos, and news stories have been published over the years about people creating similar frozen-food sculptures in cold weather climates.

Cyprien Verseux, a glaciologist and astrobiologist who spent time working at the Concordia Station in Antarctica in 2019, shared several photographs of various frozen-food sculptures to demonstrate just how cold it was in Antarctica.

Average temperatures on Mars are -60 ° C. Those of Concordia during the winter, too.

During the coldest months, the base drags for a long time below -70 ° C. The mercury would sometimes drop - if the cold had not solidified it - below -80 ° C. The wind can lower the temperature felt below -100 ° C.

These figures are surprising but, for many, hardly evocative: how to imagine a cold so far removed from what one has ever known?

We have therefore decided to illustrate it, with the following pictures as a result. YouTube page "Minnesota Cold," which centers on various "cold weather experiments," shared videos in 2019 showing the "making of" one of these cold weather sculptures. This frozen spaghetti video was filmed on a negative 12 degree day.

Another Minnesota Cold weather shows the freezing of a cracked egg. The following video was filmed during negative 27 degree temperatures.