Just because something "sounds" true doesn't mean it is. 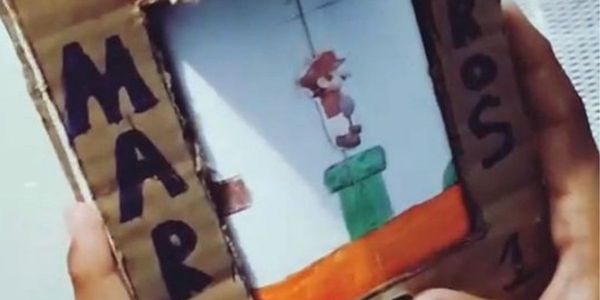 A child in Venezuela made a cardboard Nintendo Gameboy to play a home-made version of Super Mario Bros.

However, Nintendo did not send a cease-and-desist letter to this child, nor did the company sue his family for $200 million.

In January 2021, a meme started circulating on social media that featured a picture of a boy named "Paco Gutierrez," a cardboard Nintendo Gameboy he supposedly made, and a piece of text claiming that the company sued him and his family for $200 million: Paco Gutierrez, age 9, always wanted a Nintendo console. However, due to being extremely poor living in Venezuela, it was just a distant dream. Using his creativity and with the help from his uncle, he made a cardboard Super Mario game, posted it on YouTube and the video went viral. Thanks to the video, Nintendo's CEO Doug Bowser personally traveled to Venezuela, to give Paco a Cease and Desist order and sue his family for 200 million dollars.

This is not a true story — Nintendo did not sue a boy named "Paco Gutierrez" for making a cardboard console. This is a joke that appears to be mocking Nintendo's allegedly litigious nature. While many people sharing this story on social media noted that this "sounded" like something Nintendo would do, that does not mean it's actually true.

The main picture in this story showing a cardboard Nintendo comes from a video that first went viral in 2018. That video showed a homemade game that was created by a child named Rubén (not Paco Gutierrez) in Venezuela.

When this video first went viral, it was largely shared with complimentary remarks about Rubén's ingenuity. It wasn't until 2021, nearly three years after this video went viral, that this cardboard game was attached to a backstory about "Paco" being too poor to afford a Nintendo.

It should also be noted that while we have not been able to source the image in the bottom left of this meme, it was not attached to the original cardboard Nintendo video. It seems that this photograph, like the fictional back story, was simply attached to this meme, and that it does not actually show the cardboard game's creator, Rubén.