An image purportedly showing the Nike 'swoosh' symbol on the tag of a 'Make America Great Again' hat is a hoax. 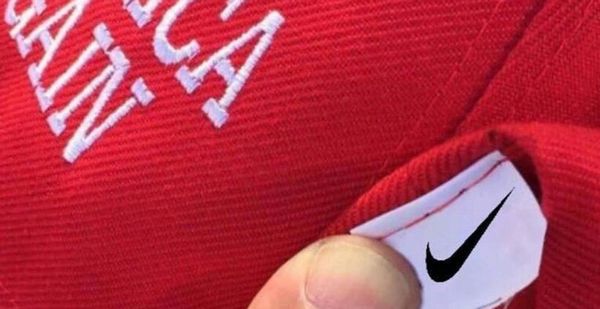 The image was posted in the midst of a controversy over former NFL quarterback Colin Kaepernick's involvement in a new advertising campaign for Nike, a sports apparel company. Kaepernick made headlines in 2016 by kneeling during pregame renditions of the national anthem to protest racial inequality and police brutality.

The "take a knee" protests, which caught on with other NFL players and spread to athletes in other sports, were viewed by some (including President Trump) as unpatriotic and disrespectful to veterans. So when Kaepernick showed up in Nike's 0th anniversary "Just Do It" ad campaign, some disgruntled consumers took to social media to share photographs and videos of themselves destroying various pieces of Nike apparel to demonstrate their displeasure.

It appears that this image of a Nike-branded "Make America Great Again" cap was posted in an attempt to "troll" pro-Trump conservatives who were upset over Kaepernick's endorsement deal ("Make America Great Again," or "MAGA," is a well-known Trump slogan). When the image was shared by Twitter user @Nicoxw1, for example, it included a message facetiously noting that "133,291,000 Americans will have a stroke today."

The image is a hoax, merely a manipulated version of an older viral image showing a "Made in China" tag on a "Make America Great Again" hat. Here's a look at the original photograph, as well as a side-by-side comparison of the Nike MAGA hat image (right) and the original "Made in China" image (left): It should be noted that while some third-party companies do produce "Make America Great Again" hats in China, the website DonaldJTrump.com, from which customers can purchase official MAGA merchandise, states that all their products are “proudly made in U.S.A.”

Sandritter, Mark.   "A Timeline of Colin Kaepernick’s National Anthem Protest and the Athletes Who Joined Him."     SB Nation.   25 September 2017.