Tim Hortons doesn't secretly add nicotine to their coffee to make it addictive to customers, and neither does any other coffee chain in Canada or the United States. 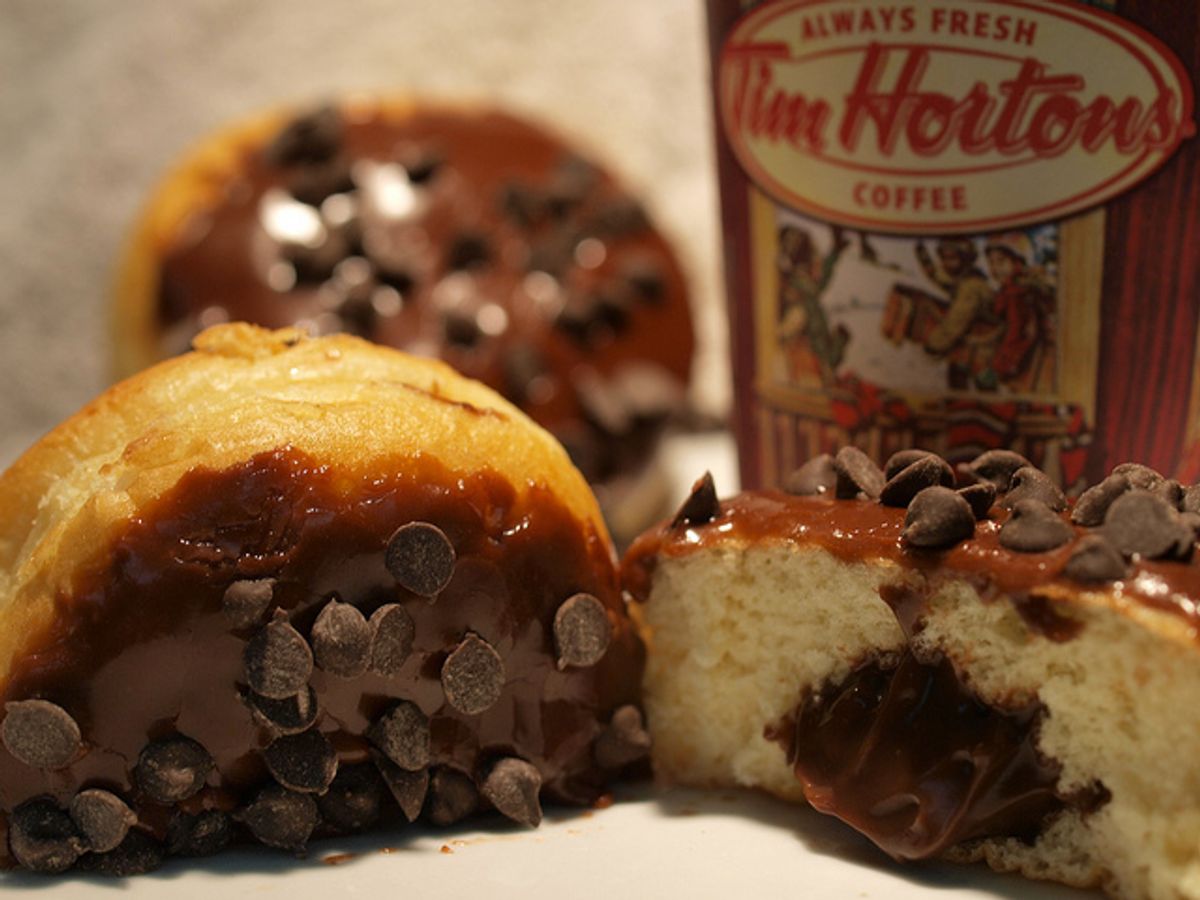 Claim:
The Tim Hortons chain of coffee and baked goods stores adds nicotine to its coffee to keep customers hooked on it.
Rating:

Although Canada has its share of Starbucks outlets, the local Tim Hortons is the destination of choice for the average Canadian in search of a quick pick-me-up. The coffee vended there is exceptional, but just as important, most of these shops are open 24 hours a day, making a stop at these donut emporiums a personal ritual that can fit into anyone's daily routine no matter what shift he might work. Tim Hortons is Canada's best-known coffee and fresh baked goods chain, established in 1964 and now boasting more than 3,400 stores across Canada and over 800 additional locations within the United States. The chain's reputation rests just as much upon its coffee as its baked goods, so coffee not sold within twenty minutes of its first being offered for sale is thrown out to ensure that patrons always get a fresh cup of java for their money. According to the President and C.O.O. of Tim Hortons, Paul House, the coffee's special appeal to consumers is the result of a superior blend and careful quality control:

The Tim Hortons special blend of coffee has been closely guarded from the beginnings of the chain, and is subject to stringent quality assurance measures by a team of coffee experts located at the Tim Hortons head office in Oakville, Ontario.

"We do extensive testing and cupping of our coffee to ensure the highest quality standards are met, and now our people can extend that quality right into the roasting process here in Rochester," said [Paul] House. "We start with the best possible arabica beans from various countries of the world to create our special blend, and can follow those beans right through the roasting and packaging processes."

Because folks are willing to line up to purchase Tim Hortons coffee rather than secure their daily cup from another source, some people have begun looking for a more sinister explanation beyond the obvious one of "The coffee is really good, the donuts are fresh, and they're always open." The combination of reasonable prices, tasty product, and numerous convenient locations appears to have spawned a particular rumor that attempts to explain the popularity of Tim Hortons' coffee: according to the whispers, the beverage has been made so alluring through the addition of nicotine, MSG, or "the maximum amount of caffeine allowed by law." In one elaborate version of the rumor, a Tim Hortons patron suffers a puzzling and severe allergic reaction after drinking some of the chain's coffee; only under duress (and an insistence on absolute secrecy) does a Tim Hortons executive disclose to the treating doctor a list of the ingredients in their "special blend" — a list that reveals the presence of nicotine. Variants of the basic rumor assert it's not the coffee itself that's loaded with nicotine, but the chain's coffee filters or that nicotine has been sprayed on the inside of its disposable cups.

But Tim Hortons coffee does not include nicotine, MSG, an usually high level of caffeine, or any similar additives. Just as the USA has its Food and Drug Administration (FDA) to oversee the safety of commercially-sold ingestibles, so Canada has its Canadian Food Inspection Agency (CFIA). Neither agency would permit the knowing inclusion of dangerous substances in a foodstuff vended to an unwary public.

Nicotine is one of the most powerful poisons known. Though we normally think in terms of arsenic and strychnine when the term 'poison' comes up, the truth is that nicotine is far more deadly. The lethal dose of arsenic for a 150 pound adult is 200 mg., for strychnine 75 mg., but for nicotine only 60 mg. Nicotine can and does kill even in relatively small amounts. Those who wear nicotine patches must exercise great care about the disposal of their used patches lest children or pets come in contact with the seemingly "spent" aids and become deeply sickened or even possibly die. Not surprisingly, nicotine is not permitted as a food additive in either Canada or the U.S.

As for MSG, although the FDA has designated the additive "generally recognized as safe," many people claim to experience adverse effects (such as headaches) after ingesting it, so all consumables containing the substance have to be clearly labelled to indicate its presence.

The "nicotine additive" rumor does not adhere solely to Tim Hortons; it has been kited about other business concerns whose products have proved to be highly (and some would say inexplicably) popular:

A friend mentioned that since 1987, McDonalds was putting nicotine into hamburgers to make them addictive.

I heard that McDonald's experimented with putting nicotine in their fries to create an addictive property.

I just received an email from a friend which claims that Pokemon cards are coated with nicotine, so children will become addicted. The letter claims that Philip Morris company is behind this.

In another form the rumor has been known to take, evil-intentioned companies or heartless universities are said to be slipping laxatives into their food to lessen the effects of food poisoning:

While at lunch with some friends yesterday, i heard what to me, sounds like a classic urban legend. Apparently there is a tale making the rounds that claims all fast food restaurants inject laxatives into their food so that people will pass the food on quickly, thereby reducing the risk of patrons getting food poisoning.

Some of my students have told me something that sounds like an urban legend. They say that the dining service here (Lafayette College) is "required" to put a certain amount of laxatives in the food so that in case people get food poisoning the food will get out of people's systems.

In yet another form of the basic rumor, conscienceless fast food companies have been incorporating anti-emetics into their offerings to help patrons keep their food down:

In a recent debate with some friends of mine, we started talking about McDonald's and my friends kept telling me that McDonald's add an ingredient that prevents people from throwing up after eating there.

A blow to the heart of the rumor in all its manifestations is that extraneous chemicals could not be surreptitiously slipped into any company's ingestible products without leaving that concern open to a stream of customer lawsuits. In the case of nicotine, the number of wrongful death suits filed would be unimaginable, given that it wouldn't take much of that particular poison to kill someone. As for MSG, caffeine, laxatives, or anti-emetics, there is no substance so innocuous that it won't provoke allergic or violent physical reactions in some people. Whatever small advantage a company might gain by adding a little extra something that would addict clients to its offerings would be quickly offset by multi-million dollar losses in civil court and a loss of consumer confidence in the even higher court of public opinion. Folks ain't going to patronize a place known for killing or sickening its customers, no matter how good the coffee.

The Tim Hortons rumors reached such prominence that in February 2004 the CBC news program Disclosure conducted its own investigation, one which included having samples of coffee from Tim Hortons (and a couple of competing chains) sent to a laboratory for analysis. The results: Tim Hortons coffee contained no measurable amount of nicotine and had, on average, less caffeine than coffee from either Starbucks or Second Cup.