Did an NFL Player Burn an American Flag in a Locker Room?

A doctored photograph purportedly showed a member of the Seattle Seahawks setting a U.S. flag on fire. 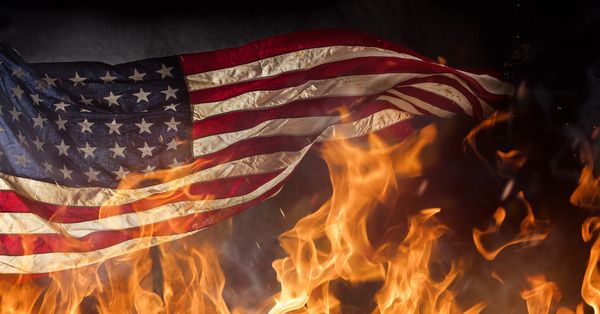 In September 2017, as the attention of the United States turned to National Football League players who took to kneeling during the national anthem as a form of a protest against police brutality, a photograph purportedly showing a Seattle Seahawks player burning an American flag in a locker room started making the usual outrage rounds: This image, posted by the "Vets for Trump" Facebook page on 28 September 2017, has been digitally altered, but offered up as genuine.

Bennett has participated in pre-game protests, and on 28 September 2017 he spoke at a CNN event about what he and the other NFL players hope to accomplish by kneeling during the anthem:

"I would like to challenge every American that is watching this show to treat people better," said Bennett, speaking at a CNN town hall moderated by Anderson Cooper. "That really is what it's about. It's about treating people like human beings. That's the first step."

"The changes start with the heart," he continued. "This is not a violent protest. This is a peaceful protest. We are challenging people spiritually, not physically, spiritually to change the way you have been doing. Change the culture."

However, while Bennett has kneeled in protest and although he has appealed to change the culture, he has not burned an American flag to make his point.