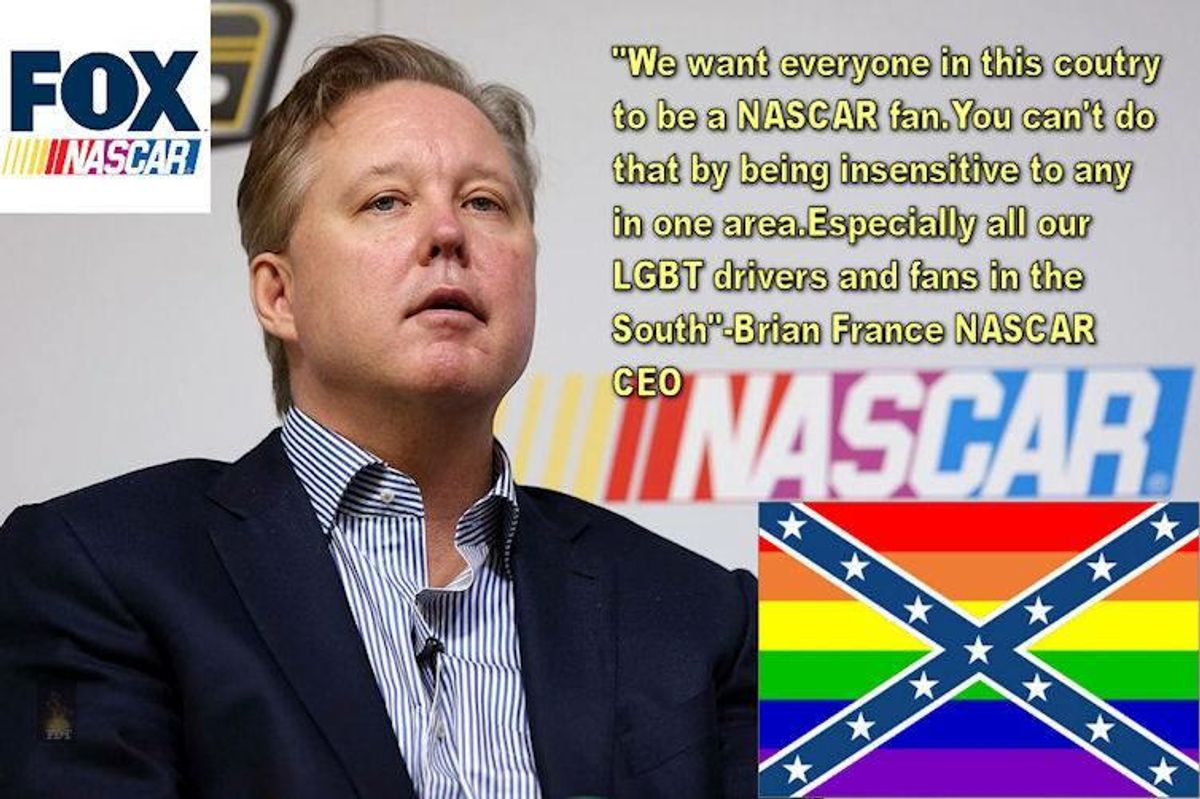 
Is this true? "NASCAR to offer fans flag exchange of their Confederate flags to a new updated LGBT version"

Origins:   On 2 July 2015, a Facebook post made by "Fox News The FB Page" reported that NASCAR was offering to exchange racing fans' Confederate flags for an updated LGBT 'Stars and Gay Bars' version over the 4th of July weekend:

Fans heading to Sunday's Coca-Cola Zero 400 will have the opportunity to get rid of their Confederate Flag and get the new LGBT 'Stars and Gay Bars' if they so choose.

According to reports from Fox Sports and the Orlando Sentinel, Daytona International Speedway is hosting a Confederate flag/Gay Pride exchange program over the race weekend.

Calling the Confederate flag an “insensitive symbol” he personally finds offensive, Nascar Chairman Brian France said the series will be aggressive in dissociating the old symbol from its events.

“We want to go as far as we can to eliminate the presence of that flag,” France said Saturday. “I personally find it an offensive symbol, so there is no daylight how we feel about it, and our sensitivity to others who feel the same way.

Shortly afterwards, many social media users began sharing the post as if it were reporting real news. However, although "Fox News The FB Page" uses the familiar FOX logo and describes itself as "the #1 name in Christian news," the group has no connection to the Fox News Channel or any other Fox entity.

"Fox News The FB Page" is a parody page that reposts items from other news sources (including Fox) under altered headlines, along with completely made-up stories such as "Expect Worst Hurricane Season Ever Because of Obamacare and Gay Marriage." This item about NASCAR's 'Stars and Gay Bars' flag exchange falls into the latter category.