Did the Chief Executive Officer of Nestlé Say Water Is Not a Human Right?

The CEO of a multinational company that makes billions annually selling bottled water called the idea that human beings have a right to water "extreme." 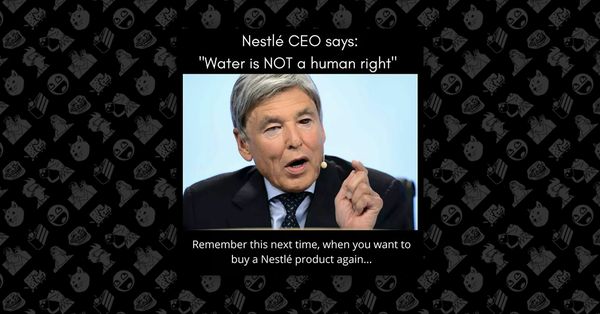 Claim:
Peter Brabeck-Letmathe, a former chairman and CEO of Nestlé, said that water is not a human right.
Rating:

Brabeck-Letmathe called the idea that water is a human right "extreme."

Brabeck-Letmathe did not declare that "Water is NOT a human right!" as a meme claims.

According to a years-old meme, the CEO of Nestlé SA, a multinational food and beverage company that boasts worldwide sales of $7.7 billion in bottled water every year, once declared that water is not a human right: The statement is controversial not only because it stands in direct contradiction to the position taken by the United Nations and human rights organizations, but also because Nestlé, like other giant water bottlers, sources its product for pennies on the dollar, often in locations where water resources are scarce or challenged.

Peter Brabeck-Letmathe served as Nestlé's CEO from 1997 to 2008 (he also served as chairman of the board for a time and is now chairman emeritus). Although he never uttered the exact words "water is not a human right," he seemed to say as much in a 2005 documentary called We Feed the World, in which he characterized the view that human beings have a right to water as "extreme":

"Water is, of course, the most important raw material we have today in the world. It’s a question of whether we should privatize the normal water supply for the population. And there are two different opinions on the matter. The one opinion, which I think is extreme, is represented by the NGOs, who bang on about declaring water a public right. That means that as a human being you should have a right to water. That’s an extreme solution. The other view says that water is a foodstuff like any other, and like any other foodstuff it should have a market value. Personally, I believe it's better to give a foodstuff a value so that we're all aware it has its price, and then that one should take specific measures for the part of the population that has no access to this water, and there are many different possibilities there."

The pushback from human rights advocates was instantaneous and strong. George McGraw, founder of the water rights nonprofit DIGDEEP, wrote:

People were shocked at the inhumanity of Brabeck’s statement, and rightly so. Taken at face value, the video appears to pit the world’s largest seller of bottled water against the 783 million people struggling to access what little water they need to survive. That’s after allegations and rebuttals regarding Nestlé’s role in restricting water access to several poor communities.

Fueling the controversy were instances in which large corporations privatized the water supplies of communities forced to sell or lease the resource due to economic hardship, only to raise the water rates of local residents to prices higher than many could afford, essentially cutting them off from their own resource.

Nestlé ultimately responded to the criticism by releasing their own video in 2013 in which Brabeck-Letmathe tried to clarify his remarks by saying that his earlier statement was taken out of context. In the newer video, he attempted to re-contextualize his comments by saying that people do not have an inherent right to waste water or own swimming pools — despite the fact that in his original statement he made it clear he was advocating water privatization:

From time to time on the internet a video clip from a TV programme made in 2005 about food is posted in which I am talking about whether water is a human right. It seems it has surfaced again, and people are using it to misrepresent my views on this important issue.

Let me be very clear about this again here on the blog, because I think the video clip, which took my views out of context, isn’t clear about the point I was trying to make. The water you need for survival is a human right, and must be made available to everyone, wherever they are, even if they cannot afford to pay for it.

However I do also believe that water has a value. People using the water piped into their home to irrigate their lawn, or wash their car, should bear the cost of the infrastructure needed to supply it.

In brief, Brabeck-Letmathe's more carefully stated position is that access to enough water for basic subsistence, and no more than that, is a human right. Albeit a welcome clarification to rights advocates like McGraw, it still falls short, in his view, of a full understanding of what constitutes a human right:

The World Health Organization estimates that human beings need between 25-50 liters of water a day to maintain basic health and hygiene. This is called our Basic Water Requirement. But imagine living on list [sic] 25 liters of water a day and maintaining your dignity. For many of us, this would be difficult.

States have an obligation to protect access to the water a person needs to survive (25-50 liters), while at the same time working to ensure that all persons have access to the amount of water they need to thrive.

Nestlé.  "Does Peter Brabeck-Latmathe Believe That Water Is a Human Right?"   August 2013.