Celebrity astrophysicist Neil DeGrasse Tyson did not admonish a young girl who stated she wished to live on the planet Jupiter. 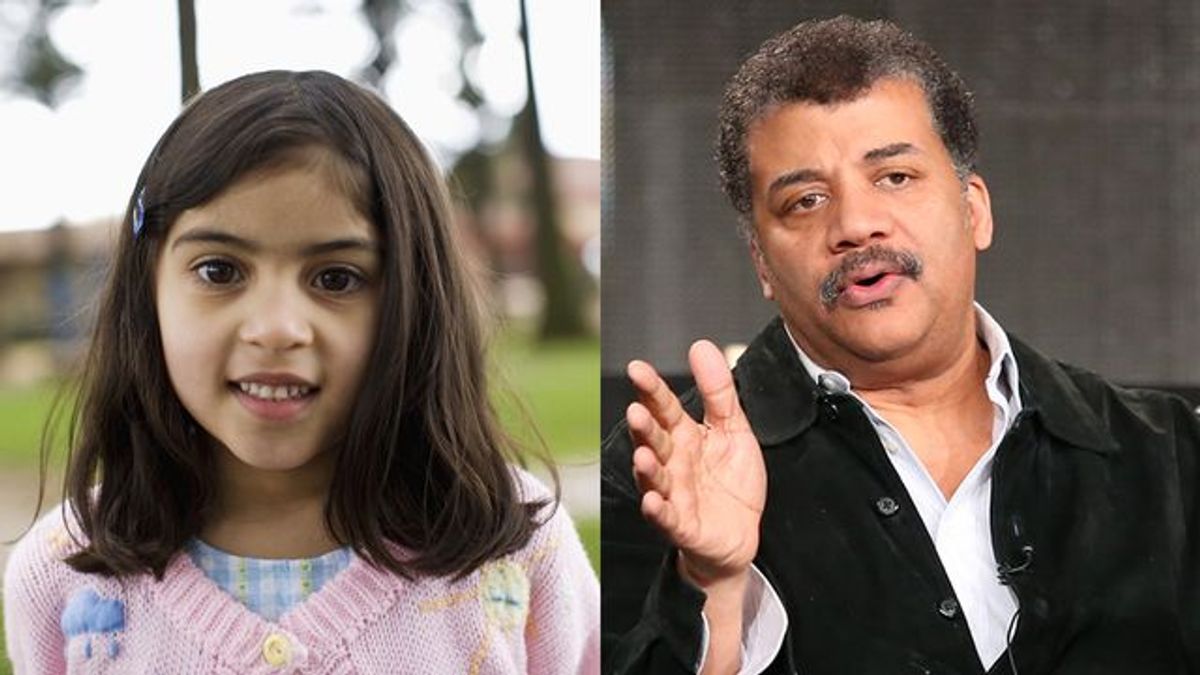 Claim:
Astrophysicist Neil DeGrasse Tyson admonished a little girl who said she wanted to live on the planet Jupiter.
Rating:

I’ve listened to Neil deGrasse Tyson before. And what I observe is a smart guy who consistently enjoys asserting his intellectual supremacy over others more than he actually likes educating. In one of his worse moments, Tyson mocked a 12-year-old girl who suggested she’d like to live on Jupiter. He ridiculed her in the midst of a crowd, then later, several times, on Twitter. That told me everything I needed to know about Neil deGrasse Tyson.

For that moment he was just a horse’s astrophysicist.

Although Larson didn't provide a link to the purported dressing down administered by Tyson, it wasn't difficult to locate the source of his claim — a 1 December 2015 item published by the satirical web site ClickHole describing a purported interaction between an 8-year-old girl and Tyson:

Get ready for the most incredible science win ever, delivered by none other than Neil deGrasse Tyson. He’s pretty much the king when it comes to shutting down people who peddle bad science, but this most recent case completely takes the cake: When an 8-year-old told the badass astrophysicist that she wanted to live on Jupiter, he completely shut her down using science.

Amazing! How many times can Neil deGrasse Tyson win the internet?

The epic science burn happened toward the end of one of Neil’s lectures at the Hayden Planetarium in New York last weekend. Third-grader Liza Collins was attending the lecture with her parents, and during the Q&A session, she raised her hand and told Neil that she wanted to live on Jupiter. But Neil wasn’t about to let her—and her bunk science—off the hook.

“Hold on, you want to live where?” Tyson said. “On a planet made entirely of unbreathable gases? One that doesn’t even have a rocky surface you could stand on? A planet that would take you six years to even get to? That’s where you want to live? Because that’s Jupiter. Enjoy your great new home!”

And of course, Neil didn’t let it end there. After the event, the Cosmos host took to Twitter to really show Liza what’s what.

The ClickHole piece also included screenshots of what looked to be tweets sent by Tyson: Larson didn't appear to be aware that ClickHole is a satirical site (an offshoot of The Onion) and that none of its content was meant to be taken seriously. Each page bears a disclaimer subtly indicating as much:

ClickHole uses invented names in all of its stories, except in cases where public figures are being satirized. Any other use of real names is accidental and coincidental. ClickHole is not intended for readers under 18 years of age.

A lengthy comment appended to the ClickHole article has been attributed to Tyson, but it isn't clear if the remarks were genuinely his. (Tyson did not link to the column on Twitter nor reference it on any platform we were able to locate.) The comment (which, if inauthentic, replicated the astrophysicist's tone quite well) countered:

First, I'll forgive you for not spelling your name correctly.

Second, and more importantly, I don't mind being labeled a horse's astrophysicist (I see what you did there), provided it's based on factual information. So what we must do is subtract the false information from your article, and then re-assess what name you choose to call me. If it still justifies "horse's astrophysicist", then so be it.

1) FYI: The cosmic perspective is all about having a second look at what, on the surface appears to be important, special, ego-boosting, etc. The Olympic medal count is not immune from this analysis. In fact an even better measure is medals per GDP per capita. This will tell you how efficiently and effectively a country is spending its wealth on athletic excellence. The Tweet, though based only on population, was a playful plea that we could be winning even more medals than we are.

2) I am agnostic, and actively disavow the atheist label:

3) People who deny human-induced climate change are badly misinformed. This position is neither politically Liberal nor Conservative. It's factual. Although one could argue that all those who want to preserve the environment are the real conservatives in this discussion.

4) You use "Liberal" as a tag to characterize my politics. Since I have no active public political position, that's a hard task to accomplish. Climate change deniers are misinformed. But so are people who think vaccines gives you autism. And so are people who think genetically modified foods are bad for you. These science-denying postures cross political boundaries, as I clumsily attempted to convey recently on Bill Maher.

5) The "incident" with a 9yr old girl never happened. It looks to be a hoax. No such tweets ever existed on November 29th, 2015, or on any other day. My only tweet on November 29, 2015 (as my followers can attest, and as anyone can see from scrolling my Twitter page was:

Starship Enterprise versus Millennium Falcon. Oh yeah, I went there:

So you abrogated your journalistic integrity by not verifying what you read in somebody else's article, before using it as a foundational pillar in yours.

6) I am 3x appointed by President George W. Bush, serving on commissions to advise him on the future of the American aerospace Industry, on NASA, and on the annual Presidential Medial of science winners. So your disapproval of my views is not shared by others on the conservative spectrum.

7) Lastly: my research output as a scientist is not hidden. You can find it here, if you are interested: https://www.haydenplanetarium.org/tyson/curriculum-vitae

So when you factor in (or simply subtract) all these elements from your writeup, If what remains still justifies labeling me a horses astrophysicist, then, as I said, I'm okay with that.

p.s. FYI: I have relatives who live in Idaho. And I've loved every visit. Last they visited me, prompted this Tweet:

Nephew from Idaho, puzzled by locks on my NYC apt door. I asked, Don't you have locks at home? He replied, No, just Shotguns.

Larson's apparent mistaking of ClickHole for a straightforward popular news outlet wasn't the first instance of (sometimes widespread) confusion over the site's satirical nature. Prior ClickHole items that caused similar consternation on social media included claims George Clooney maintained an open tab at Chipotle through which anyone could obtain free burritos, Beanie Babies were full of spider eggs horrifically hatching after many dormant years, comedian Adam Sandler correctly predicted five tragic events, the Supreme Court ruled cops could no longer engage with members of the public in any manner, Gwyneth Paltrow starved to death after attempting a week-long "food stamp challenge," a Texas man underwent a frightening eye enlargement procedure, Johnny Depp enrolled in medical school to save a sick child battling cancer, and Pokemon Go added a feature wherein Pokemon would scream when within a mile of a registered sex offender.