Were National Guard Soldiers Forced To Sleep in a Parking Garage?

Thousands of soldiers were in Washington, D.C., during Biden's inauguration to secure the area after a Jan. 6 riot at the Capitol. 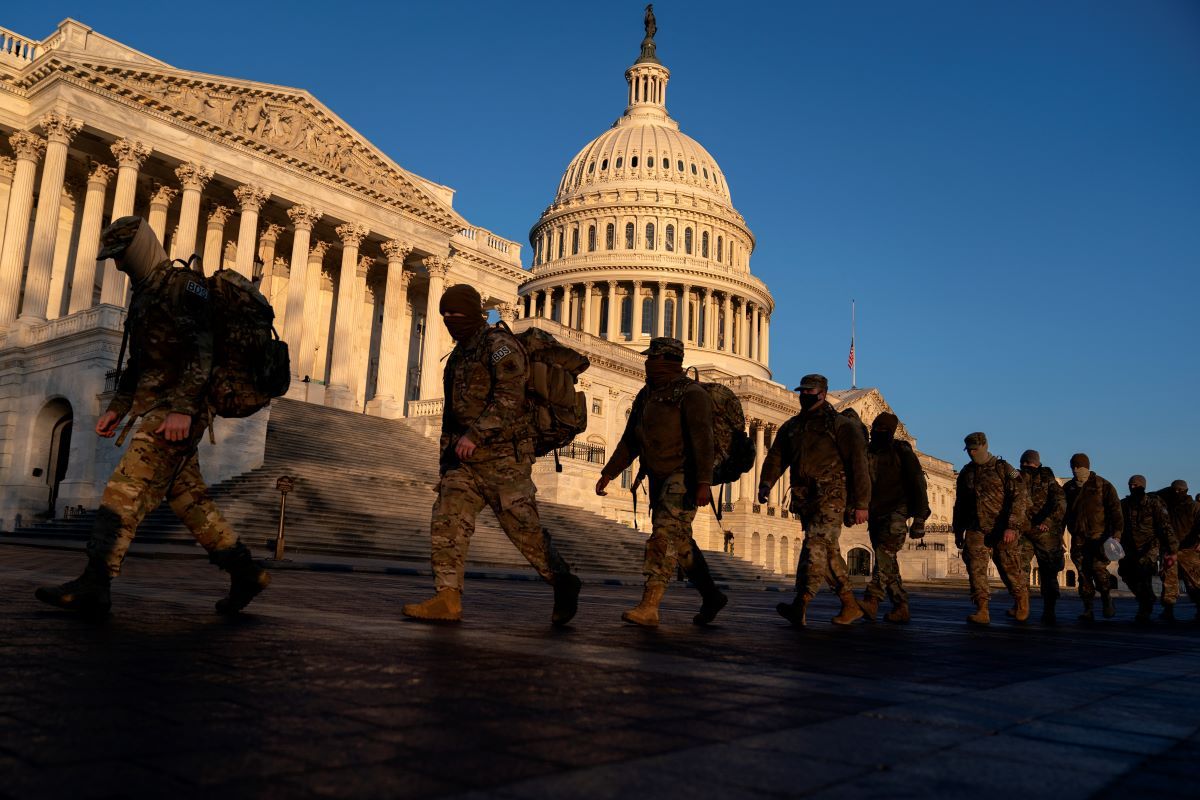 Claim:
Hundreds of members of the National Guard were made to vacate the U.S. Capitol and sent to rest in a nearby parking garage, while providing security around U.S. President Joe Biden's inauguration.
Rating:

Thousands of soldiers from the National Guard poured into Washington, D.C., in January 2021 to provide security around the inauguration of U.S. President Joe Biden and in the wake of a Jan. 6 mob attack on the U.S. Capitol. But on Jan. 21, pictures and videos emerged on social media showing hundreds of these soldiers crammed into a parking garage for their rest.

Conservative media outlets like Gateway Pundit decried this treatment of soldiers who had reportedly been removed from their original resting area in the Capitol cafeteria and into the nearby parking garage of the Thurgood Marshall Judicial Center. These included soldiers from other states like Maryland.

According to reports from The Washington Post, CNN, and Politico, who interviewed numerous soldiers in the Guard, hundreds of them were banished from Capitol premises and resting areas like a cafeteria in a Senate office building and told to go into a parking garage. No reason was given for their banishment. The cafeteria was used as a place for soldiers to rest in between guard shifts, eat meals, or do other work.

Soldiers complained of poor resting conditions in the parking garage, where they said they inhaled exhaust fumes, found few bathrooms, and struggled to sleep under harsh fluorescent lights. According to one account there was only one electrical outlet for all the soldiers, no internet reception, and only one bathroom with two stalls for 5,000 troops. A photograph obtained by The Washington Post showed a portable toilet used by soldiers was overflowing onto the sidewalk. The lack of electrical outlets hampered their ability to communicate with each other because they could not charge phones and carry out mission planning, according to some soldiers.

Soldiers also said that several among them had been infected with COVID-19 due to being forced to rest in close quarters. When asked by reporters if there were any procedures to prevent the spread of the virus among troops, one soldier laughed and said, “There’s none. We are on top of each other all day, every day. We’ve given up.”

But not all the guards were in the parking garage at the same time. During their guard duty shifts, members were cycled into the garage to warm up and take a break. According to officials with the D.C. National Guard, the soldiers had hotel rooms where they could rest after a shift. But soldiers could not easily return to them as they conducted shifts on and off for a few hours over a day or two at a time.

There was some dispute about who made the soldiers move out of the Capitol. According to Capt. Edwin Nieves Jr., a D.C. National Guard spokesman, “As Congress is in session and increased foot traffic and business is being conducted, U.S. Capitol Police asked the troops to move their rest area outside of the Capitol. They were temporarily relocated to the Thurgood Marshall Judicial Center garage with heat and restroom facilities.”

But Yogananda Pittman, the acting chief of the Capitol Police denied this, saying, “I want to assure everyone that, with the exception of specific times on Inauguration Day itself while the swearing-in ceremonies were underway, the United States Capitol Police did not instruct the National Guard to vacate the Capitol Building facilities. And on Inauguration Day, the Guard was notified and encouraged to reoccupy the spaces in the Capitol and CVC at 2 p.m.”

Sen. James Inhofe, a Republican, tried to get to the bottom of the matter: “So this is what happened. There was one uniformed police officer who issued an order without authority or going through the chain of command. I'm glad the Capitol Police are trying to figure who it was. We will identify who that person was and make it public." The Capitol Police said they were looking into the matter.

Republican and Democrat lawmakers expressed their outrage at the situation and vowed to rectify it. By Thursday night, the situation had been reversed, and the guards were back in the Capitol. The National Guard released a statement: “Brig. Gen. Janeen Birckhead, Inauguration Task Force Commander confirms that troops are out of the garage and back into the Capitol building as authorized by the USCP (U.S. Capitol Police) Watch Commander and the troops will take their breaks near Emancipation Hall going forward."

A CBS News reporter spoke to some guards after they were relocated back:

Given that multiple reports confirmed that soldiers were sent to a parking garage to rest, and the situation was addressed by lawmakers and Capitol Police soon after, we rate this claim as “True.”