Claims regarding the presence of formaldehyde in “Naked” products rely on the assumption that chemicals modified through reactions with other chemicals are still, somehow, the same chemical. 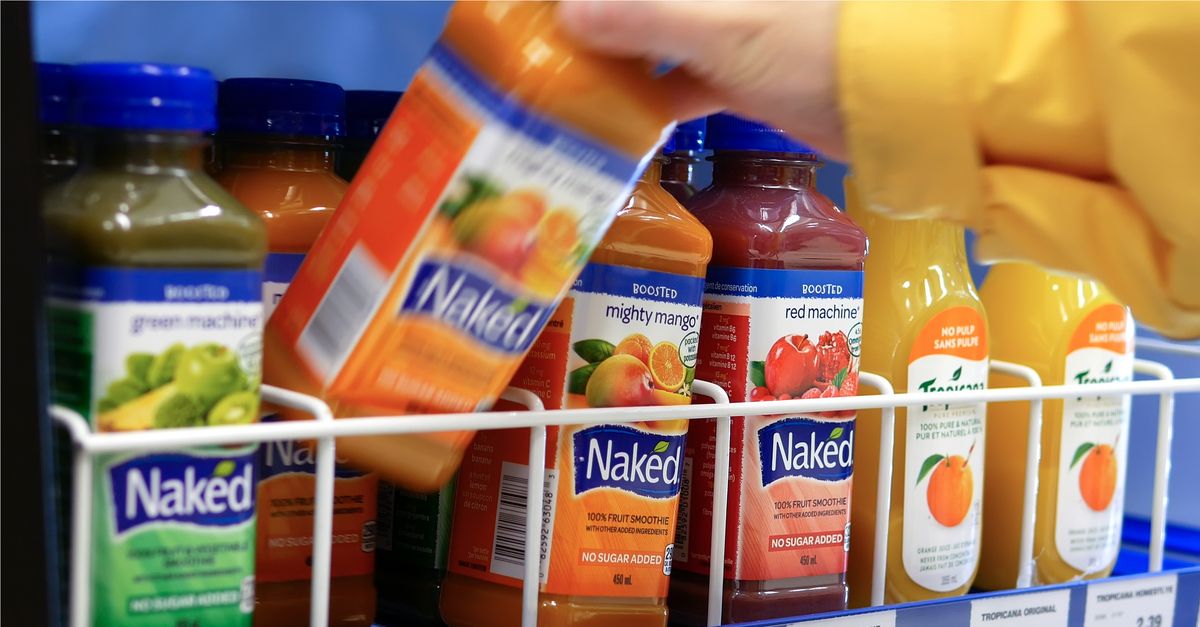 On 14 March 2017, Facebook user Kelly Kluchins Underwood published a post titled “Friends don’t let friends drink formaldehyde” which (at publication time) had been shared over 150,000 times. Referencing a legal settlement over a lawsuit alleging that PepsiCo’s “Naked” brand of fruit juices and smoothies contained misleading labels, her post went on to make the unfounded claim that these products contain formaldehyde: Based on the $9 million sum cited above, Underwood was likely referring to a class action lawsuit settled in July 2013, although multiple similar lawsuits have been filed, including another one that was settled out of court on 21 February 2017. The former complaint did not mention formaldehyde at all and was not about Naked products supposedly containing dangerous or harmful ingredients; it addressed Naked's use of allegedly deceptive product labeling terms, as described in the case's settlement documents:

In March 2012, Plaintiffs filed a Consolidated Class Action Complaint (“CAC”) alleging that Defendant, among other things, falsely marketed, manufactured and sold the [Naked] Products as “All Natural,” “100% Juice,” “All Natural Fruit,” “From Concentrate,” and/or “non-GMO” ...

Plaintiffs allege that Defendant’s product labels are false and likely to deceive reasonable consumers because they contain unnatural and synthetic non-juice ingredients, including ascorbic acid, beta carotene, biotin, choline biturtrate, cyanocobalamin, D-calcium panthothenate, Fibersol®-2, niacinamide, pyridoxine hydrochloride, among other ingredients. Plaintiffs further allege that certain of the ingredients in the products were made from genetically modified plants or organisms in contrast to Defendant’s representations that the products were “non-GMO,” and that Defendant did not adequately disclose that the Products were made from concentrate.

The parties settled the case, with PepsiCo agreeing to a $9 million aggregate payout to consumers who had purchased Naked Juice products during a specified time period:

Naked Juice Co. of Glendora Inc. has agreed to shell out $9 million to settle a consolidated putative class action in California alleging that it falsely advertised some of its juice and smoothie products as "all natural" and non-genetically modified.

Under the deal the consumer plaintiffs lodged with the federal court, Naked Juice will continue to deny the allegations that its product labels were misleading or false but agreed shell out $9 million for a settlement fund and to redesign the labels to either eliminate or modify the representations at issue.

A similar lawsuit was settled in February 2017. But again, that lawsuit was a dispute about the use of terms such as "no sugar added" and "only the best ingredients" on the labels of Naked brand products, not about Naked products' supposedly containing dangerous or harmful ingredients:

Consumer advocacy group the Center for Science in the Public Interest (CSPI) claims that statements like "no sugar added" and "only the best ingredients" lead customers to believe that Naked Juice is healthier than it really is. The class action is requesting that PepsiCo change its marketing practices and award damages to people who have bought the products in question.

CSPI points to Naked’s Pomegranate Blueberry juice as an example. It's labeled with "no sugar added," which is true. However, the complaint asserts that the labeling leads customers to believe it contains less sugar than other drinks, which it says is far from true.

As for taglines like "only the best ingredients" and "just the healthiest fruits and vegetables," CSPI says Naked Juice is made predominantly of "cheap, nutrient-poor" juices like orange and apple juice.

Neither lawsuit involved complaints about the use of formaldehyde in Naked products. This claim appears to be based on chemophobic language found on “alternative health” web sites regarding the chemical calcium pantothenate, as the language used in Underwood’s Facebook post is similar to this highly-shared post from livingmaxwell.com (emphasis theirs):

The primary basis of the lawsuit stemmed from the company’s use of the words “All Natural” on products that contained Archer Daniels Midland’s Fibersol-2 (“a soluble corn fiber that acts as a low-calorie bulking agent”), fructooligosaccharides (an alternative sweetener), other artificial ingredients, such as calcium pantothenate (synthetically produced from formaldehyde), and genetically-modified soy.

Calcium pantothenate is a synthetic calcium salt form of the naturally occurring and vitally important vitamin B5, according the National Cancer Institute’s online thesaurus:

Calcium Pantothenate is the calcium salt of the water-soluble vitamin B5, ubiquitously found in plants and animal tissues with antioxidant property. Pentothenate is a component of coenzyme A (CoA) and a part of the vitamin B2 complex. Vitamin B5 is a growth factor and is essential for various metabolic functions, including the metabolism of carbohydrates, proteins, and fatty acids. This vitamin is also involved in the synthesis of cholesterol, lipids, neurotransmitters, steroid hormones, and hemoglobin.

Nevertheless, it is true that calcium pantothenate's chemical synthesis does include formaldehyde, as described in the Encyclopedia of Bioprocess Technologies:

This is a good place to point out that anytime the words “derived from” are used in relation to a scary-sounding chemical, it is almost certainly pseudoscientific fear-mongering hogwash. The fact that a chemical is used to synthesize another chemical does not mean that the new chemical carries the same risks as the old chemical. This is because — follow us here — the final product is not the same as the original chemical anymore.

Formaldehyde, with the chemical structure CH2O, is a fundamental (albeit highly toxic) chemical building block. Theoretically, one could “derive” water from formaldehyde, but that water, H2O, would be no different than non-formaldehyde derived water. Formaldehyde is toxic, but calcium pantothenate is distinctly not formaldehyde and is not toxic.

There were, certainly, some misleading elements to the Naked product line's labels that prompted lawsuits. But those misrepresentations pale in comparison to the demonstrably false claim that Naked brand juices and smoothies contain formaldehyde.

Goldberg, Max.   "The Shameful Truth About the Naked Juice Class Action Lawsuit Settlement and What American Consumers Can Do About It."     livingmaxwell.com.   24 July 2013.