Did Myeshia Johnson Accuse Rep. Frederica Wilson of Using Her Husband 'As a Political Platform'?

An alleged Facebook post from the widow about a controversial condolence call was "published" at least an hour before President Donald Trump phoned her. 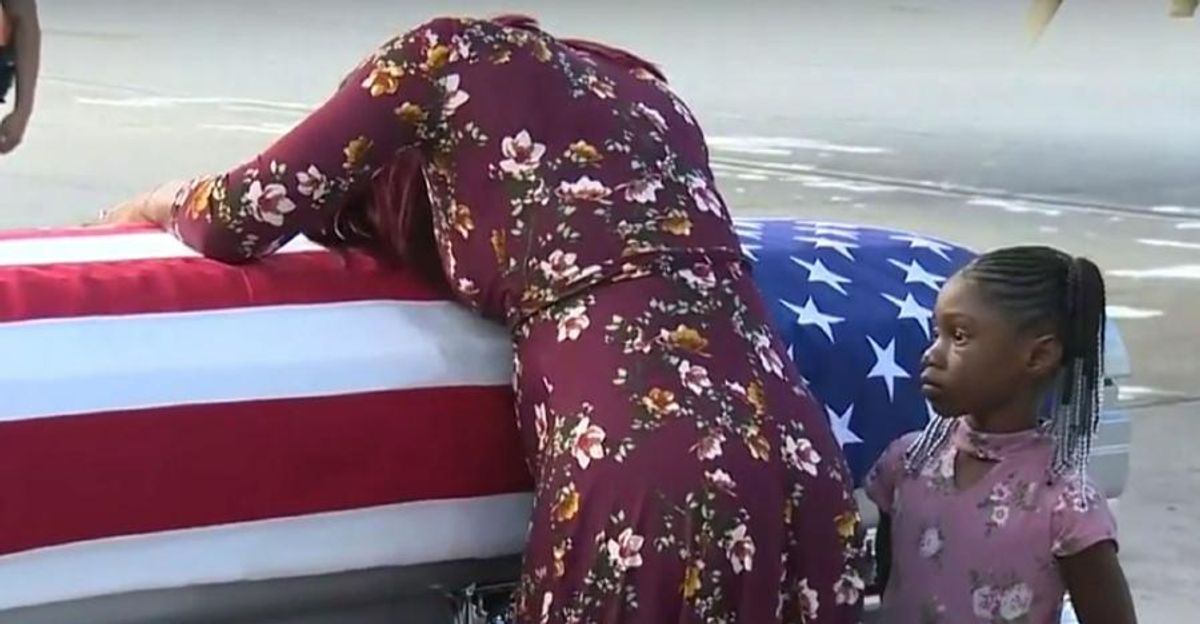 I want to set the record straight! I'm getting sick and tired of this so called politician using my husband as a political platform. Even buy [sic] her own words she did not hear all of the conversation she only heard part of it. This is what actually was said. "They know the risk, they know what they sign up for but they still volunteer to put their lives on the line for their fellow Americans. We owe them a debt that can never be repaid"

A phone call from President Donald Trump to Johnson is at the center of what has become a public dispute between Johnson and the Trump administration. But the validity of the screenshot is doubtful.

While the date of the post corresponds with that of the 17 October 2017 condolence call, the time listed is actually more than an hour before the reported time of President Trump's phone call, which was 4:45 p.m. Eastern time.

Also, the picture shows a Facebook profile bearing a square profile picture. But the social media site implemented an update in August 2017 that changed the shape of users' profile pictures in the Facebook newsfeed from square to round, as seen in this example from the Snopes.com Facebook page (top left): La David Johnson was killed while serving in Niger on 4 October 2017, in what has been described as an ambush by Islamic insurgents. Three other U.S. service members, Staff Sgt. Bryan C. Black, Staff Sgt. Jeremiah W. Johnson, and Staff Sgt. Dustin M. Wright, were also killed in the attack, as were four Nigerien troops.

Rep. Wilson said she was riding with the Army sergeant's widow and members of her family to receive his body when the President called, telling CNN host Don Lemon that night:

I heard what [Trump] said because the phone was on speaker. Basically he said, "Well, I guess he knew what he signed up for, but I guess it still hurt." That's what he said.

Wilson accused Trump of being insensitive not only to La David Johnson's family but "to the family of every soldier that has paid the ultimate price for our freedom."

The sergeant's mother, Cowanda Jones-Johnson, has corroborated Wilson's account of the phone call, saying that "President Trump did disrespect my son and my daughter and also me and my husband."

President Trump responded by denying what Rep. Wilson had claimed:

On 23 October 2017, Myeshia Johnson told ABC News that Wilson was "100 percent" in her description of the phone call. She said:

But while President Trump suggested he had proof to support his account of events, White House spokesperson Sarah Huckabee Sanders told reporters that the call had not been not recorded. Instead, Sanders said, Chief of Staff Gen. John Kelly and other White House staff members were near President Trump when he phone Myeshia Johnson and heard what he said.

For his part, Kelly called Wilson an "empty barrel" and accused her of taking credit in 2015 for the funding of a Federal Bureau of Investigation field office in Miami, a claim that was debunked by footage of Wilson's remarks that was posted online on 20 October 2017.

Despite Sanders' statement that the president's conversation with Myeshia Johnson was not recorded, Lara Trump, the president's daughter-in-law and host of a Facebook broadcast devoted to what his administration calls "real news," asserted on 20 October 2017 that she had read a transcript of the call which confirmed Trump spoke the words in question, albeit with additional context:

Wilson came under additional criticism after she responded to Kelly's allegations by exclaiming that "You mean to tell me that I've become so important that the White House is following me and my words? This is amazing. That's amazing. I'll have to tell my kids that I'm a rockstar now."

Despite President Trump's suggestion that I have recanted my statement or misstated what he said, I stand firmly by my original account of his conversation with Myeshia Johnson, the widow of Sgt. La David Johnson. Moreover, this account has been confirmed by family members who also witnessed Mr. Trump's incredible lack of compassion and sensitivity.

The Johnson family and the families of the three other soldiers who tragically lost their lives in the Niger ambush are experiencing what I am certain must feel like an unbearable loss. Rather than engage in a petty war of words with Mr. Trump, it is so much more important to embrace and support the families and honor these fallen heroes.

We reached out to Rep. Wilson for comment but have not yet received a response.