Salafists vandalized multiple burial sites in Libya because they hold that "worshipping at graves and shrines is un-Islamic and idolatrous." 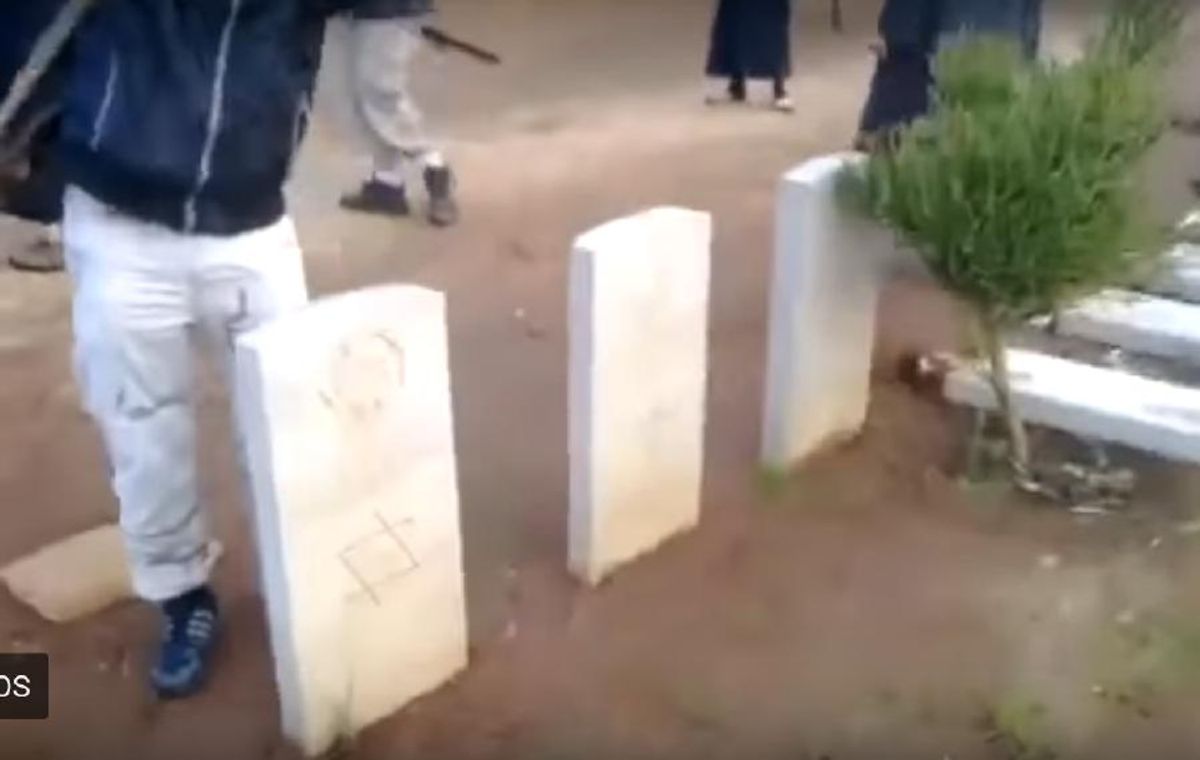 Claim:
A video shows a group of Muslims destroying burial plots of non-Muslims at a British WWII cemetery in Libya.
Rating:

The video shows a group of Salafist vandals knocking over gravestones at a British WWII cemetery.

The Salafists did not vandalize the gravestones because of the nationality or religion of the persons interred; they destroyed burial sites of Muslims and non-Muslims alike.

This is disgusting and criminal. Please keep this going so everyone on your email list sees it and passes it on.

Every time a joke and or cartoon is made about the Koran, the whole world turns upside down...!! and we are all called racists!!!!!!!!

However they appear to do whatever they like and no one says anything... and the majority of people remain silent. See this video whilst it's available and before it is removed!!!

A video that had been circulating for a few years, touted as showing a group of Muslims destroying a cemetery in Libya where British World dead are interred, experienced a renewed viral spread in January 2015. The video is indeed real, but the story behind what it depicts is not as clear cut as the accompanying explanations make it out to be.

First of all, the incident portrayed in the video did not occur in January 2015: it took place nearly three years earlier, and the video record of it had been widely available online ever since. There is also no foreseeable threat of the video's being removed from YouTube.

The video was taken in when a group of vandals attacked two World cemeteries in Benghazi, Libya. A BBC report noted the group seen in the video, who targeted Muslim shrines as well as the headstones of Christian and Jewish soldiers, were militant Islamists known as Salafists:

The Foreign Office said 200 graves and a Cross of Remembrance were damaged at the Benghazi British Military Cemetery.

The Benghazi War Cemetery was also targeted. Both cemeteries commemorate British and Commonwealth nationals who died during or after World

The Foreign Office said it now believed the attack was carried out by militant islamists, known as Salafists, after Muslim shrines were also targeted.

"It's horrific and wrong and we have expressed to the Libyan authorities our profound distress at what has happened on behalf of those who have loved ones there," Foreign Office Minister Alistair Burt told the BBC.

"The Libyan authorities have responded in kind. They are horrified by what has happened.

"These are not actions carried out by the government of Libya, this is an extremist mob that has done this and we all share the same revulsion for it."

However, the Salafist vandals did not target burial plots at that cemetery because of the nationality (i.e., British) or religion (i.e., non-Muslim) of those who are interred there. Rather, the incident was part of a wave of Salafists attacking graves and shrines in mosques and Muslim burial they hold that "worshipping at graves and shrines is un-Islamic and idolatrous":

Salafists — ultraconservative Muslims — behind the recent wave of sectarian bombings and the destruction of historic mosques and they aim to rid Libya of all Sufi landmarks by the end of the year.

Salafis, who follow literalist and strict approaches to Islam, abhor the "heretical" trappings and less austere practices of Sufi Muslims. They claim worshipping at graves and shrines is un-Islamic and idolatrous and abhor the Sufi use of music and dance.

The increase in brazen attacks on Sufi mosques, including the blatant broad daylight bulldozing of the well-known Sidi Sha'ab mosque in the center of Tripoli, have infuriated Libya's new Parliament.

A January 2015 article described Salafists as a "fundamentalists who believe in a return to the original ways of Islam":

The word 'Salafi' comes from the Arabic phrase, 'as-salaf as-saliheen', which refers to the first three generations of Muslims (starting with the Companions of the Prophet), otherwise known as the Pious Predecessors.

What do Salafis believe?

The 100-year-old Sunni-based Salafi school of thought aspires to emulate the ways of the Prophet Mohammed. Recognisable from their distinctive long white robes, long beards and flowing head scarf, Salafis are socially and religiously conservative.

Although they believe in a unified Islamic state and Sharia law, they are not always politically radical, because they regard political involvement as un-Islamic.

That said, Salafism encompasses a huge range of from non-violent religious devotion at one extreme, to Salafi Jihadism at the other.

It should also be noted hundreds of thousands of Muslims fought alongside British troops during the First and Second World Wars. While the exact number of Muslim soldiers who participated in those wars is not known, a 2009 Reuters article reported more than one-third of the soldiers serving in the Indian Army at the end of World were Muslims.

The Punjabi Musselman [Muslim] was regarded as the backbone of the old Indian army, and constituted about a third of the British Indian army. Known for their reliability, they were steady men who could be depended on to carry out any task at hand.