Was a Musician Deported for Attacking a Los Angeles Street Vendor? 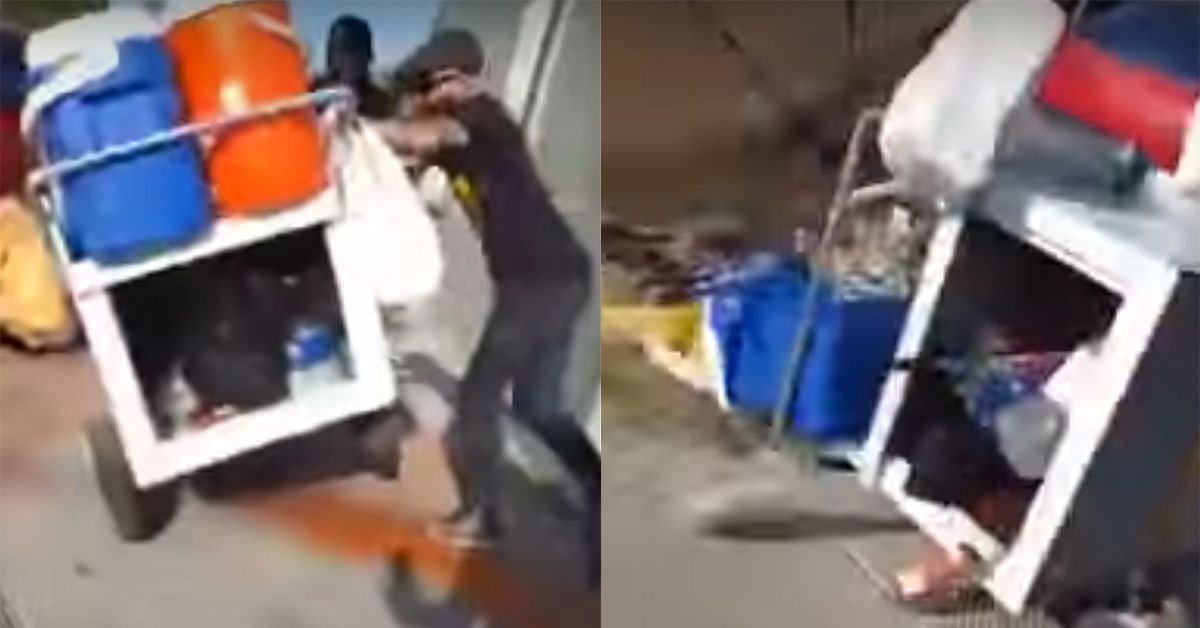 Claim:
A musician was deported to Argentina after he was caught on video knocking over a vendor's cart on a Los Angeles street.
Rating:

In July 2017, just after footage of an altercation between a musician and a street vendor in Los Angeles went viral, generating outrage and a discussion about the effects of gentrification, a dubious Spanish-language web site published a fabricated story about the aftermath.

According to Espectador, police quickly took notice of Carlos Hakas after he flipped Benjamín Ramírez's cart during the 17 July 2017 encounter. The site "cited" the Los Angeles Times for the key portions of its story:

As the Los Angeles Times reported on its website, a warrant was generated and 40-year-old Argentinian Carlos Hakas was arrested at a Hot Dog's restaurant located at 709 N. La Brea Ave., in Los Angeles, California.

In a statement, immigration officials said that they will seek identifying documents and the Argentinian consulate's cooperation in the deportation of Carlos A. Hakas once the judicial process against him has ended.

While there is a Pink's Hot Dogs restaurant located at that address, authorities have not made any statement indicating that they are pursuing deportation proceedings against Hakas. (Times reporter Ruben Vives has also confirmed that his newspaper made no such allegation.)

Espectador does not identify itself as a satirical web site, but it displays a link to the Facebook page for El Ruinaversal, a separate site whose name is a play on the longtime legitimate newspaper El Universal. El Ruinaversal's site does contain this disclaimer:

"El Ruinaversal" is a satirical news page, the content presented is fake or invented.

Nothing that it presents is real, except stories under the "incredibly true" category, in which the information really is true.

While Hakas may not have drawn the attention of immigration officials, police are looking into possible vandalism charges against him in connection with the encounter, which was reportedly viewed millions of times after Ramírez's mother posted the footage on Facebook on 24 July 2017.

The video begins with Hakas — seen initially holding a dog on a leash ordering Ramírez to move his cart from a street corner in Hollywood. When Ramírez refuses, Hakas hands off the dog to a woman identified as his girlfriend Holly Corvella before pushing the cart over, sending his elotes — a Mexican variation of corn on the cob —  spilling into the concrete.

Corvella is then heard telling Ramírez, "Don't you fucking try it. Stay the fuck away." He replies in Spanish, "I don't give a shit. I'm not moving from here." Ramírez then points his phone camera toward himself and says:

Seconds later, Hakas replies, "I'm not a racist, idiot" before saying in Spanish:

I'm not a racist, I'm Argentinian, you retard.

Ramírez has said that Hakas was brandishing a stun gun during the encounter. While the musician can be seen holding a pink object, it is unclear what it is. Police confirmed to us on 28 July 2017 that they are still investigating the incident.

Meanwhile, Ramírez has won a groundswell of public support after the video spread online. Cartoonists Lalo Alcaraz and Junco Canché highlighted the incident on the web site Pocho.com, and the site began selling a t-shirt with proceeds going toward Ramírez and his family. A separate online fundraiser for him raised $7,800 —  exceeding its initial goal by $6,800.

While he may not be facing deportation, Los Angeles police are in fact investigating possible vandalism charges against Hakas over the altercation.