Does a 'Multicultural Beach' Sign in Melbourne Prohibit Pork and Alcohol?

The city of Melbourne tweeted that they do not endorse the sign, noting in a droll aside that they have no beaches in their municipality. 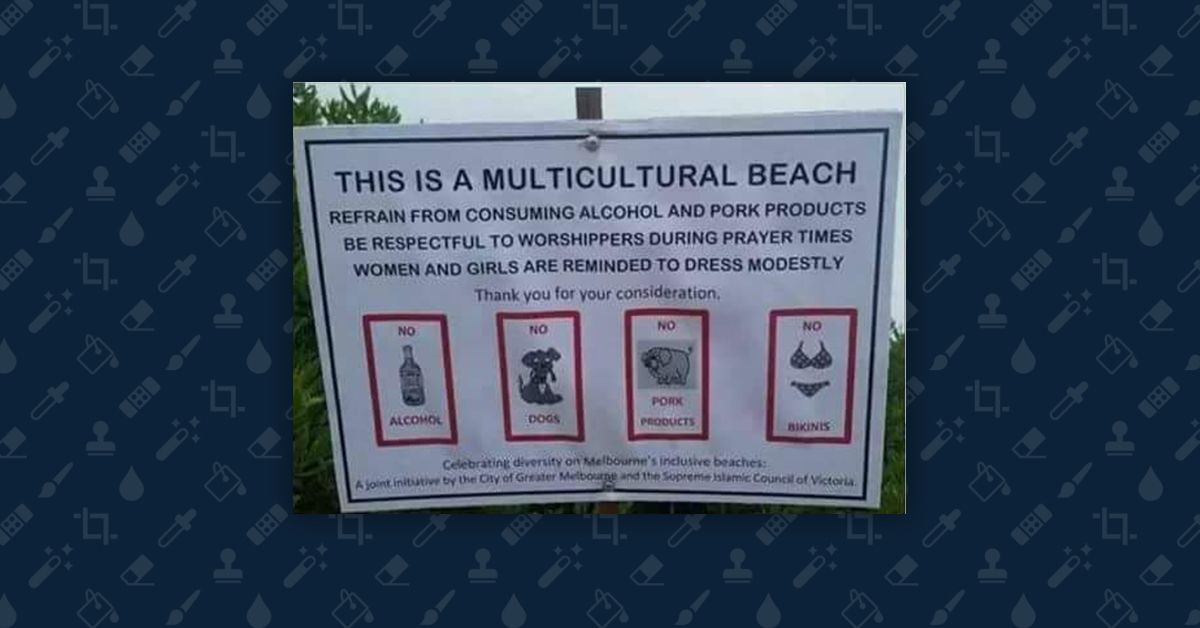 Claim:
A sign posted on a public beach by the city of Melbourne, Australia tells visitors to refrain from consuming of pork and alcohol and to be respectful during Islamic prayer times.
Rating:

The Twitter universe witnessed a feeding frenzy in late January 2018, when an image went viral purporting to show a sign posted on a beach in Melbourne, Australia calling on visitors to refrain from consuming pork or alcohol and to be "respectful" during Islamic prayer times:

?‼?? #Australia: Oh dear! Wtf! The laws of #Sharia are already in effect on #Melbourne beach. pic.twitter.com/CmKPumkd0x

THIS IS A MULTICULTURAL BEACH

No Alcohol | No Dogs | No Pork Products | No Bikinis
Celebrating diversity of Melbourne's inclusive beaches:
A joint initiative by the City of Greater Melbourne and the Supreme Islamic Council of Victoria

The reaction to it in some quarters was swift and furious, not to mention absurdly credulous:

Yes, this is placed up by committed Muslims themselves not council (city of port Phillip). This has been seen @ Port Melbourne beach on the blvd @ the end of Todd rd. The sign is them effectively warning non Muslims to stay away but cleverly hidden under the word multiculturalism

Simply another step closer to a European Islamic state, it is all structured and planned. This is getting near to Islamic saturation and when we are at a stage that the brotherhood feels in a position to go to the next step we will feel the full force of sharia. Education is key

Several inquiries directed to the city of Melbourne Twitter account about the image elicited an official disavowal:

thanks for bringing this to our attention. This is not a City of Melbourne sign and we don't endorse it. As a side note we don't have any beaches in our municipality.

There are, in fact, several public beaches near Melbourne, but none in Melbourne. We take the city at their word that they did not post the sign. For that matter, there's no evidence that the sign was even posted in or near Melbourne, or anywhere else in Victoria. We've found no other images in which the sign is visible. Indeed, the photo could have been taken anywhere. We assume it was staged, either to ridicule Muslims or to instill a hatred and fear of Islam in those who are ignorant of what Muslims actually believe and how they live.

The stunt relies on common misconceptions about and misrepresentations of Islam, such as that Muslims so abhor pigs and pork that they can't stand to be in their vicinity and would even demand that no one near them consume such products. That is simply not the case.

Faithful Muslims observe dietary restrictions that are comparable in some ways to kosher laws in Judaism. Like Judaism, Islam prohibits the consumption of pork products as well as certain other foods, and sets a number of specific rules as to how food must be sources and prepared. These rules, called "halal" in Islam, also ban the consumption of alcohol. But they do not require that non-Muslims abide by these restrictions, much less that Muslims cannot share a beach with non-Muslims who do eat pork and drink alcohol.

The same applies to the larger set of moral guidelines based on the Qur'an and the writings of Muhammad known as "Sharia," which govern virtually every aspect of Muslim life. Perhaps the most common misconception about Islam of all is that Muslims wish to impose "Sharia law" on non-Muslims in secular countries. What Islam actually calls for, however, is for Muslims to follow Sharia and non-Muslims to follow the laws and moral principles of their own faiths.

Far from being an example of "creeping Sharia," as some would no doubt have it, the fabricated signage we are here discussing looks more to be a case of blatant xenophobia.