Did Mother Teresa Teach Hillary Clinton a Lesson on Abortion?

Authentication is lacking for a verbal exchange that supposedly took place many years ago between Hillary Clinton and Mother Teresa. 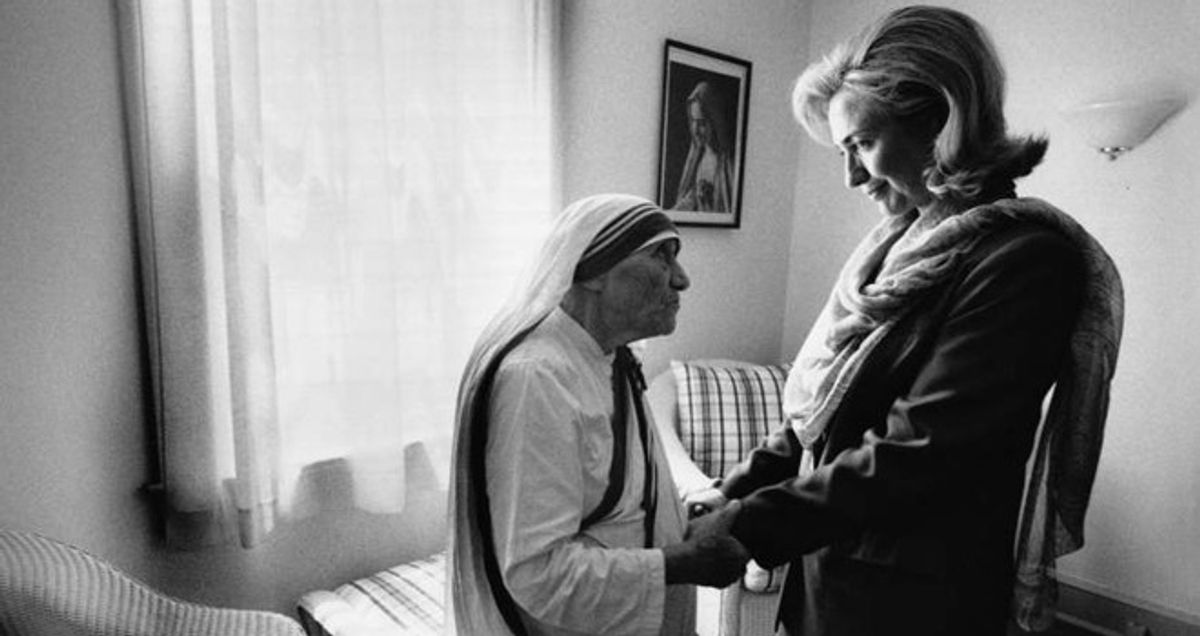 Claim:
When asked by Hillary Clinton why she thought the U.S. hasn't had a female president yet, Mother Teresa answered, "Because you probably aborted her."
Rating:

In a Vatican ceremony on 4 September 2016, Pope Francis conferred sainthood upon Mother Teresa, the Albanian-born nun who famously devoted most of her life to ministering to the poor in India until her death in 1997 at the age of 87. He described her as a "model of holiness" and "generous dispenser of divine mercy," citing, among other qualifications, Mother Teresa's unwavering opposition to abortion in any form. "She was committed to defending life," the Pope said, "ceaselessly proclaiming that 'the unborn are the weakest, the smallest, the most vulnerable.'"

For Americans, the canonization of Mother Teresa coincided with the home stretch of the 2016 presidential campaign, in which the two principal candidates, along with their parties, have taken opposite stands on the issue of abortion. Republican Donald Trump has declared himself "pro-life" and supports legal sanctions to "protect the unborn," while Democrat Hillary Clinton says she's committed to protecting "women's access to critical health services, including safe, legal abortion."

The timing of the resurrection of an old anecdote about a meeting between Hillary Clinton and Mother Teresa — an anecdote some have called "apocryphal" even while passing it along — was probably not so coincidental.

Most versions tie the story to a National Prayer Breakfast hosted by the Clinton administration in 1994, at which Mother Teresa was invited to speak and did not mince words about her feelings on abortion:

The greatest destroyer of peace today is abortion, because it is a war against the child, a direct killing of the innocent child, murder by the mother herself. And if we accept that a mother can kill even her own child, how can we tell other people not to kill one another? How do we persuade a woman not to have an abortion? As always, we must persuade her with love and we remind ourselves that love means to be willing to give until it hurts. Jesus gave even His life to love us. So, the mother who is thinking of abortion, should be helped to love, that is, to give until it hurts her plans, or her free time, to respect the life of her child. The father of that child, whoever he is, must also give until it hurts.

By abortion, the mother does not learn to love, but kills even her own child to solve her problems. And, by abortion, that father is told that he does not have to take any responsibility at all for the child he has brought into the world. The father is likely to put other women into the same trouble. So abortion just leads to more abortion. Any country that accepts abortion is not teaching its people to love, but to use any violence to get what they want. This is why the greatest destroyer of love and peace is abortion.

After the speech, Mother Teresa and First Lady Hillary Clinton — who, needless to say, held disparate opinions on the topic of the day — briefly conversed, as recalled by Clinton in her 2003 memoir, Living History:

She had just delivered a speech against abortion, and she wanted to talk to me. Mother Teresa was unerringly direct. She disagreed with my views on a woman's right to choose and told me so. Over the years, she sent me dozens of notes and messages with the same gentle entreaty. Mother Teresa never lectured or scolded me; her admonitions were always loving and heartfelt. I had the greatest respect for her opposition to abortion, but I believe that it is dangerous to give any state the power to enforce criminal penalties against women & doctors. I consider that a slippery slope to state control in China & Communist Romania. I also disagreed with her opposition — and that of the Catholic Church — to birth control. However, I support the right of people of faith to speak out against abortion and try to dissuade women, without coercion or criminalization, from choosing abortion instead of adoption. Mother Teresa and I found much common ground in many other areas including the importance of adoption.

According to the anecdote that concerns us today, there was another verbal back-and-forth between Clinton and Mother Teresa on that occasion (or perhaps it was another occasion — there are varying versions of events), which began with the First Lady quizzing the future saint about, of all things, gender and politics:

“Why do you think we haven’t had a woman as president yet?” First Lady Hillary Rodham Clinton asked her guest over their lunch at the White House.

The little woman sitting at table with Mrs. Clinton did not hesitate in her reply.

“Because she has probably been aborted,” said Mother Teresa.

It's an exchange Hillary Clinton would vividly remember, one would think, yet she neglected to mention it in her memoir, nor has she ever spoken of it in public speeches or interviews. It doesn't appear in biographies of Clinton or Mother Teresa. (The question of why the U.S. hadn't yet seen a woman as president also seems a rather implausible query for Hillary Clinton to have posed to a conservative Albanian-Indian Roman Catholic nun.)

The source most frequently cited by those spreading the story during the 2016 presidential campaign is an essay by educator Sean Fitzpatrick that appeared in the Catholic journal Crisis Magazine on 20 January 2016. Fitzpatrick used the anecdote as an epigraph without specifying where he found it. When we contacted him and asked for his help to authenticate it, Fitzpatrick replied that he has heard it told on many occasions over the years but doesn't know of a definitive source.

He pointed us to a few other iterations of the tale online, however, which at least led a few years further back, such as this variant published in the Evansville, Indiana Courier & Press on 11 March 2010:

Many years ago there was a large dinner party at the White House. At one end of the table there were two distinguished women carrying on a conversation. At one point in the conversation, one woman looked at the other and asked a simple question, "Why do you think in the United States of America with all of our liberties and all of our freedoms, we have never elected a female president?"

The other woman, without looking up from her meal and with a very calm look on her face said, "Because you probably aborted her."

In this case, as in some others we found, the storyteller was identified as pro-life activist Shawn Carney, though we've no reason to think the story originated with him. It appears, in fact, to be standard fare at pro-life gatherings. Here is a mention from October 2010:

We attended our annual banquet for Pregnancy Resources Center last night.  The speaker recounted a conversation between two women several years ago in Washington DC who were attending the national prayer breakfast.  One of the women, Hillary Clinton, said, “You know, I wonder why we have never elected a woman president?”  The other woman, Mother Teresa, said, “Maybe it is because you aborted her.”

We haven't yet come across any instances of the story being told before 2009, however. One of the earliest examples is in a blog post written by Ohio Congressman Steve Chabot in October of that year:

Now I agree with [Anita Dunn] on the pro-life crusader Mother Teresa, who reportedly when then Senator Hilary Clinton wondered why America had never had a woman President was rebuked by the diminutive nun as follows: “You probably aborted her.”

But none of the leads we've followed converge on a single source, much less an authoritative one. There doesn't seem to be a source. It's just "that story about that time Hillary Clinton got schooled by Mother Teresa" people tell at pro-life events. It is told consistently, mind you — apart from small details — but such is the case with most anecdotes this pointed and this short, regardless of whether they're true or false. Until we encounter a citation that names an eyewitness source — or, better yet, quotes one — we're labeling the authenticity of this story unproven.

Gennarini, Stefano.  "Mother Teresa to be Canonized on September 4: 'Abortion is the Greatest Threat to Peace.'"    Life News.  1 September 2016.