Did Morgan Vague Lose to Greta Thunberg For 'Person of the Year'?

Can you lose something you were never nominated for? 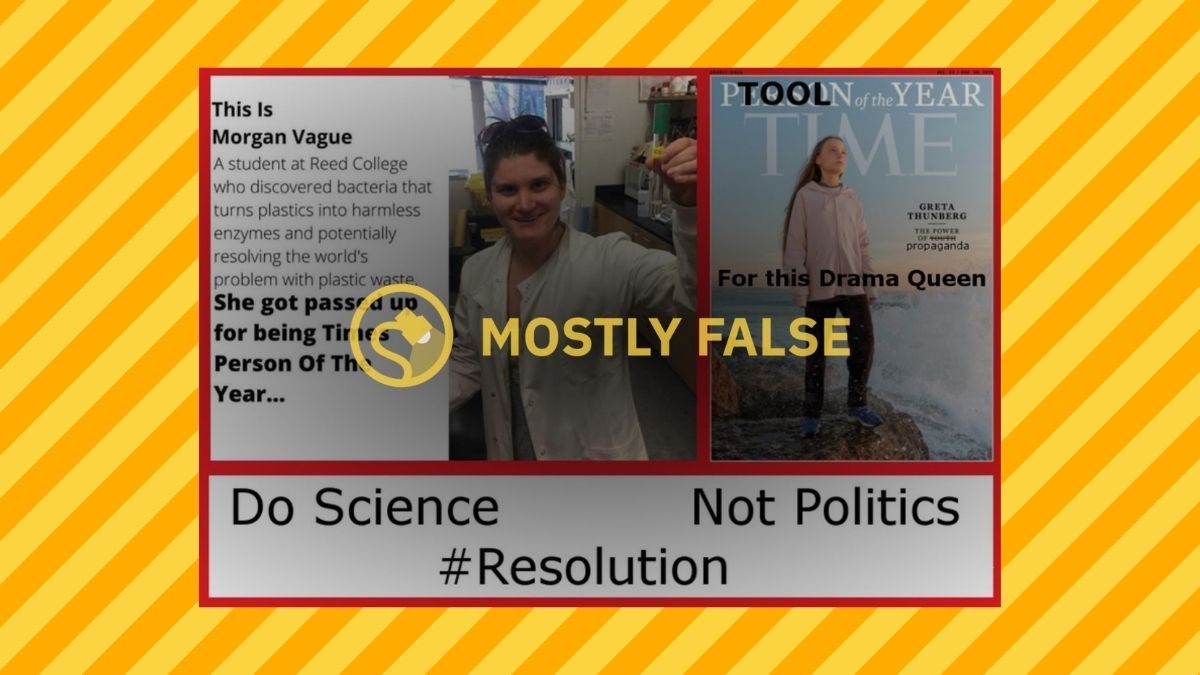 Greta Thunberg was named Time Magazine's Person of the Year in 2019. Morgan Vague was not.

Morgan Vague was never nominated for Time Magazine's Person of the Year award in 2019. Furthermore, Vague's experiment — in which she bred microbes that ate plastic — was conducted in 2018, meaning that she was never really in direct competition for the 2019 award.

A popular internet meme claims that teenage climate activist Greta Thunberg was named Time Magazine's Person of the Year in 2019 despite there being a much more deserving candidate: Morgan Vague. Vague really did successfully breed bacteria that fed on plastic. However, saying that this is the "discovery of our lifetime" is premature, at best, and claiming that Vague was nominated for Time's Person of the Year (POTY) Award only to "lose" to Thunberg is simply incorrect.

Thunberg, a teenage climate activist who has been drawing the ire of conservative groups ever since she started organizing strikes at schools in protests of climate change inaction, was named Time Magazine's Person of the Year in December 2019.

The BBC reported: "Greta Thunberg, the Swedish schoolgirl who inspired a global movement to fight climate change, has been named Time magazine's Person of the Year for 2019. The 16-year-old is the youngest person to be chosen by the magazine in a tradition that started in 1927."

Was Vague Nominated? No.

The most popular version of this meme claims that Vague was also nominated for Time Magazine's 2019 award, but that she "lost" to Thunberg. This isn't true. Vague was not nominated for the award.

A spokesperson for Time told us, regarding Vague, that "this a false claim" and directed us to the magazine's reader's poll for 2019 POTY. While some versions of this rumor claim that Vague won the people's choice, it doesn't appear that she was even mentioned on this list. "Hong Kong protesters" took the largest portion of the vote (30%), followed by "climate strikers," Keanu Reeves, and BTS, each with less than 5% of the vote

The criteria for being named Time Magazine's POTY are a bit vague. In 1998, Walter Isaacson, the former managing editor for Time, wrote that the award goes to "the person or persons who most affected the news and our lives, for good or ill, and embodied what was important about the year, for better or for worse."

One plausible explanation for Vague's omission from the 2019 POTY contest is that the meme is touting an experiment that was conducted the year prior. Reed Magazine, a publication of Reed College where Vague studied, wrote in May 2018:

If Vague were to have been nominated for POTY, it would have been for 2018, not 2019, meaning that she was never really in direct competition with Thunberg.

Another reason Vague may have not been nominated for this award is that her work hasn't really been tested at scale. As noted above, Vague's work has proved to show a "tantalizing possibility" to fight pollution, but it has not yet proven to be the "discovery of our lifetime" that will reverse decades of plastic pollution.

What Exactly Did Vague Do?

Vague was a student at Reed College when she successfully bred microbes that consumed and degraded plastic for her senior thesis. Reed Magazine writes:

PET is an environmental nightmare. The plastic is biologically inert, notoriously resilient, and takes years, even centuries, to break down. An estimated 480 billion plastic bottles are manufactured every year, and after they have served their purpose many of them wind up in landfills, rivers, and oceans—the infamous Pacific trash vortex is currently the size of Texas.

But biologists at Reed have recruited an unlikely ally in the fight against plastic pollution—bacteria. Certain strains of bacteria produce lipase, a fat-digesting enzyme that can break down plastic molecules and render them palatable—in theory, anyway.

“The problem for most bacteria is that PET is a big, tough molecule with a lot of weird components,” says Morgan, who performed the research for her senior thesis. “Lipase is kind of like marinade on a steak. The bacteria squirts out the lipase and the lipase breaks the plastic into bite-size pieces.”

While Vague's experiment opened up the "tantalizing possibility of using microbes to fight pollution," there's still a lot of work to do. When Vague conducted her experiment, these microbes took months to significantly degrade PET. The question now is whether this process can be sped up and replicated on a large scale.

“​Greta Thunberg and Donald Trump Nominated for Time Person of the Year.” The Independent, 21 Dec. 2019, https://www.independent.co.uk/news/world/americas/time-person-year-2019-winner-greta-thunberg-trump-magazine-shortlist-a9240526.html.