Is This Video of a Moonrise Over Byron Bay Real?

The Byron Bay Lighthouse has become a favorite of night sky photographers. 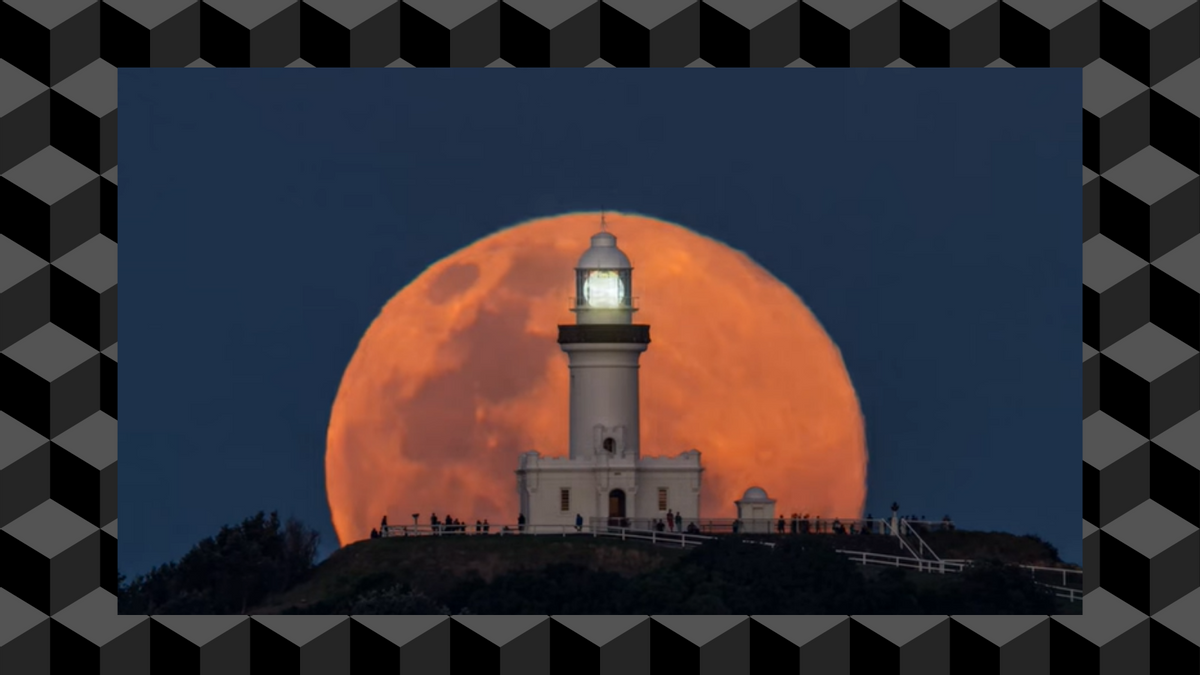 Claim:
A video shows a moonrise at the Cape Byron Lighthouse in Australia.
Rating:

In October 2020, a video supposedly showing a moonrise near the Cape Byron Lighthouse at Byron Bay in New South Wales, Australia, was widely circulated on social media:

The stunning visuals in this video — mainly the eerily bright and large moon — led some to be skeptical of this footage. Generally speaking, this is a genuine video of a moonrise over Byron Bay. That means the moon in this video is not a computer-generated image. However, the moon would not appear this big with the naked eye. It requires distance, a long lens, and some photographic know-how to create this visual.

This video was captured by Australian landscape photographer Kelvin Hennessey. In short, Hennessey was standing several miles away on a nearby beach and using a telescope in order to create the visuals in this footage. In an Oct. 2 Facebook post, Hennessey shared a photograph taken from the same spot that he took the above-displayed viral video. The following image was taken with a wide-angle lens, and provides a more accurate representation of how this moonrise looked with the naked eye.

By using a long focal length and by standing miles away from the lighthouse, Hennessy was able to compress the background and make the moon appear much larger than normal. The website Photopills explained this technique, writing:

If you want the moon to be the main attraction in the photo, go for focal lengths of 400mm, 500mm and beyond. Depending on the idea you have, you can use a teleconverter (for example, a 2x) to increase your focal length and capture a giant moon.

By using such a long focal length, you’re reducing the angle of view so much that you’ll only capture the moon and the subject in the frame, neglecting the landscape. In this case, you’ll need to get far from the main subject (more than 1km). It’s the case of the typical long distance shots.

The video of the moonrise over Cape Byron Lighthouse that went viral in October 2020 is hardly the first time that this scene has been captured. In fact, this spot is well-known to photographers and locals. In 2017, the Byron Bay website published an article about a similar video taken by photographer Rob Evans:

Photographer Mark Gee wrote an article in 2014 about his experience of shooting sunrise and moonrise photos at Byron Bay. Photographer John Derry has also captured numerous images showing an unusually large moon behind this lighthouse. When Luke Taylor created the following time-lapse video of a similar moonrise at this location (a video that featured more than 1,000 still images), he noted that he was standing about 4.3 kilometers (2.6 miles) away on Belongil Beach. Like the aforementioned photographers, Taylor used distance and a long focal length in order to compose this scene: