In February 2022, Stéphane Bancel had sold less than $10 million worth of shares by mid-month, about $390 million less than claimed. 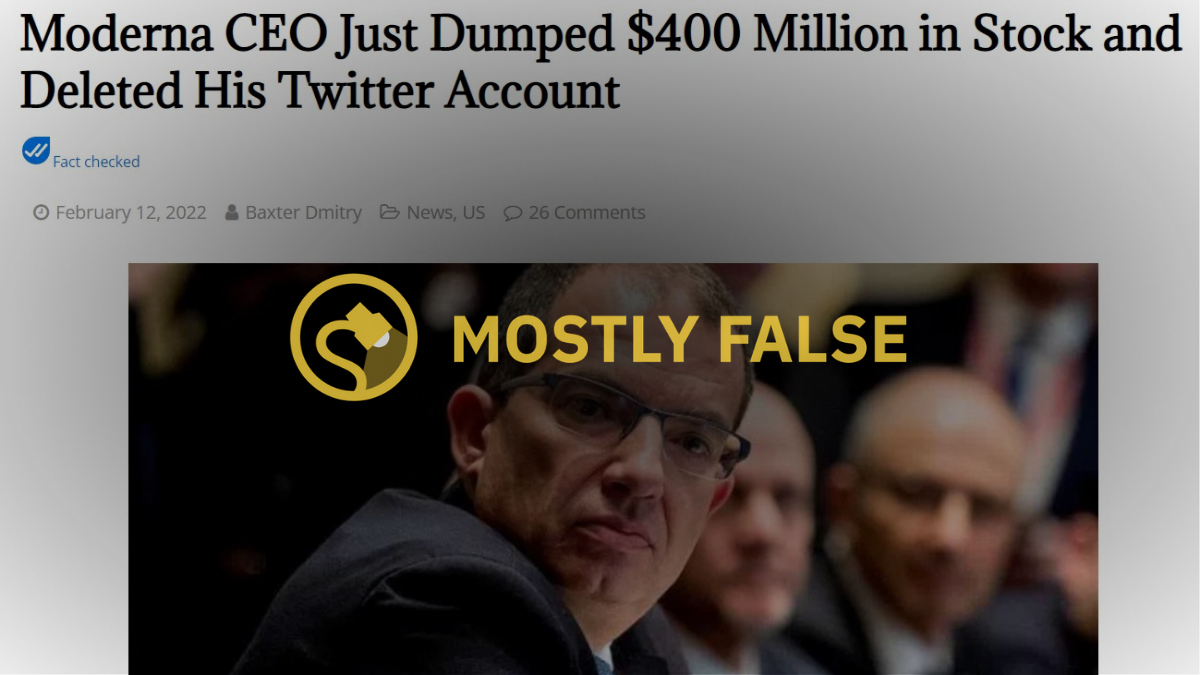 Claim:
In February 2022, Moderna CEO Stéphane Bancel suddenly dumped $400 million worth of the company's stock over worries that it was about to lose value because of "bad news," and deleted his Twitter account.
Rating:

However, Bancel did not "dump" $400 million worth of Moderna stock all at once in February 2022. Bancel had sold less than $10 million worth of shares by mid-month, about $390 million less than claimed. Furthermore, these sales were done at predetermined times and had nothing to do with current events.

Days after Pfizer admitted a safety audit could wipe billions off their stock market valuation, Moderna CEO Stéphane Bancel dumped hundreds of millions of dollars in stock and deleted his Twitter account.

This rumor was also circulated on social media:

Bancel Did Not Suddenly Dump $400 Million Worth of Stock

While rumors hold that Bancel "dumped" $400 million worth of stock all at once in February 2022, that simply wasn't the case.

Bancel had been selling a very small portion of his shares on a nearly weekly basis for years. These sales, in accordance with Rule 10b5-1 of the Securities and Exchange Act of 1934, were done at predetermined times to prevent insider trading. A recent FEC filing showed that Bancel sold less than $10 million worth of shares (through mid-month) in February 2022, about $390 million short of the $400 million claimed in this article.

It should also be noted that these sales were all predetermined in Bancel's 10b5-1 plan. In other words, Bancel didn't "dump" stocks due to some current event or expected "bad news." Rather, these sales took place at scheduled times. Here's a look at some of Bancel's early 2022 transactions (via Insidertrader.com)

Bancel was selling about 19,000 shares a week. While this may seem like a lot, it represented a tiny fraction of the approximate 21 million shares Bancel had in Moderna as of February 2022. When Bancel sells 19,000 shares, he's selling about .09% of his total shares.

Quartz noted that Bancel had been slowly selling his stock since 2019, before the COVID-19 pandemic and before Moderna developed a COVID-19 vaccine.

Bancel has been steadily selling off shares of Moderna stock since late 2019, before the covid-19 pandemic arrived and before the company’s announcement that it was developing a mRNA vaccine. Before the pandemic, the company‘s market value was around $6.5 billion, it’s now $65 billion after reaching as high as $195 billion in August 2021. The value of Bancel’s holdings are driven by this rise and fall—not his trades. He still owns more than 21.8 million shares of Moderna stock valued at $3.5 billion and remains the largest insider shareholder.

A Twitter account for Bancel (@sbancel) was deleted in February 2022. While this was portrayed as a highly significant event by other social media users, it should be noted that this was a personal account (not one officially connected to Moderna) that was rarely used. An archived version of this page from November 2022 shows Bancel's most recent post was from April 2019. We reached out to Moderna for comment and we will update this article if more information becomes available.

Squires, Camille. “How Much Moderna Stock Stephane Bancel Owns and Why He Just Sold $1.8 Million of It.” Quartz, https://qz.com/2126952/how-much-moderna-stock-stephane-bancel-owns-and-his-insider-sales/. Accessed 14 Feb. 2022.